The supermodel posts a "multitasking" photo and the pundits go ape 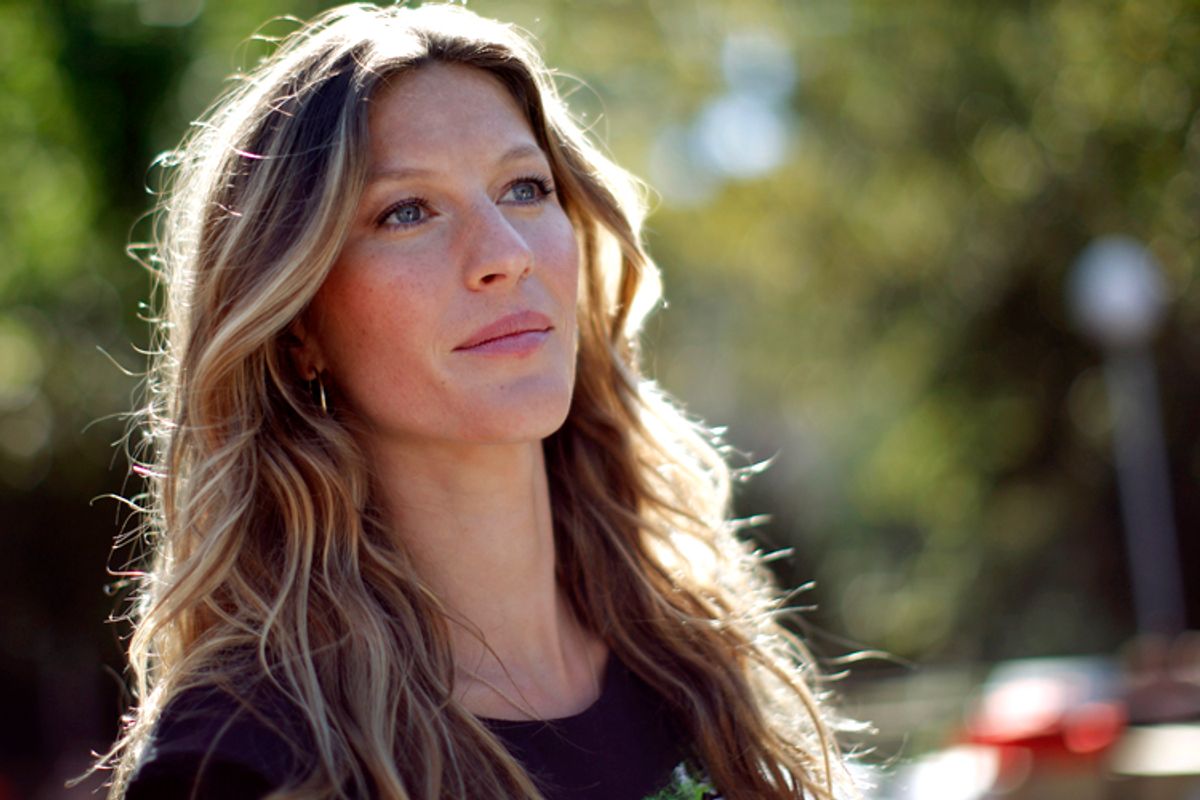 What, you don't have a trio of stylists primping your long golden hair and impossibly flawless face and elegant fingernails while you breast-feed your baby? I guess you're not Gisele Bündchen, then. Earlier this week, the 33-year-old model and wife of NFL quarterback Tom Brady posted a photo on Instagram depicting exactly that scenario, with the caption, "What would I do without this beauty squad after the 15 hours flying and only 3 hours of sleep #multitasking#gettingready." Cue controversy!

Denise Albert, co-creator of TheMoms.com, told ABC News Wednesday, "I think breast-feeding is a very personal thing. And for her to put this on Instagram while she’s getting her hair and makeup done is a little outrageous, and I think obnoxious." Writing in Elle, Jessica Grose added, "Yes, Gisele is breastfeeding her child like millions of women do every day. But the circumstances surrounding that act for Gisele are unfortunately anything but common." And in the Huffington Post, Lisa Belkin echoed the sentiment, in a story headlined, "If Only All Moms Could Breastfeed Like Gisele."

So let me get this straight -- being the highest-paid model in the world with an NFL player husband is … unusual? Huh. It's likely easier to rag on Gisele and her apparent sense of privilege thanks to her previous comment that "There should be a worldwide law...that mothers should breastfeed their babies for six months." And the photograph is so beyond the typical breast-feeding mom experience that "Shameless" actress Emmy Rossum couldn't resist lobbing back a parody photo of herself with a baby doll and an entourage of stylists, saying, "I feel ya girl." But Playboy model and new mother Holly Madison says, "I think what Gisele did was awesome. She is braver than I am. When I first had the baby I said, 'I'm going to breast feed the baby and set a good example,' but it's not fun or easy to do that."

Though mothers are ceaselessly told that breast is best, that if you want your baby to not be neurotic and sickly you'll find a way to nurse him, we continue to be squeamish about women incorporating breast-feeding into the reality of their lives. Breast-feeding mothers – and you'd better believe breast-feeding working mothers -- don't leave the planet to feed their babies on a magical pink cloud of teddy bears and lullabies. They do it while they're simultaneously awkwardly crooking a phone to their shoulders and scheduling a dentist appointment for the older kid, managing their online banking, and, if they are very lucky, shoveling in a few bites of their own lunch. It usually looks less like a Botticelli vision of Venus emerging from the waves than a leaky catastrophe. Have you ever used a breast pump? It is not an experience that ranks high on the personal dignity scale. So Gisele's far more elegant version of getting the job done was perhaps bound to inspire feelings of inadequacy.

But all Gisele was doing was posting a photo of her own motherhood reality, one that exists in a sphere of appointments and other people. She was admitting that even she doesn't look like Gisele without a phalanx of stylists. She was doing it in a manner that shows her being present for and loving to her baby. Yet writing in the L.A. Times, Paul Whitefield snarked that, "Someone (or several someones) is multitasking, but it ain’t Bündchen" and suggested it might inspire men to consider, "I haven’t gotten anything for Christmas yet for my little honey bunny; wonder if she’d like a spa day?"

Believe it not, haters, what Gisele was showing was not a "spa day." And not that a rich, beautiful woman needs some slob defending her, but, unique as her career is, she was depicting a scene from her work day. It involves travel and having people fuss over her while her baby nurses and plays with her necklace. (Multitasking!) She wasn't saying it looks like your work day. She wasn't claiming to be a paramedic. She was showing what it looks like for her. For her. Not removed from the other responsibilities of her life. But right in the thick of them. Don't hate her because it's beautiful.