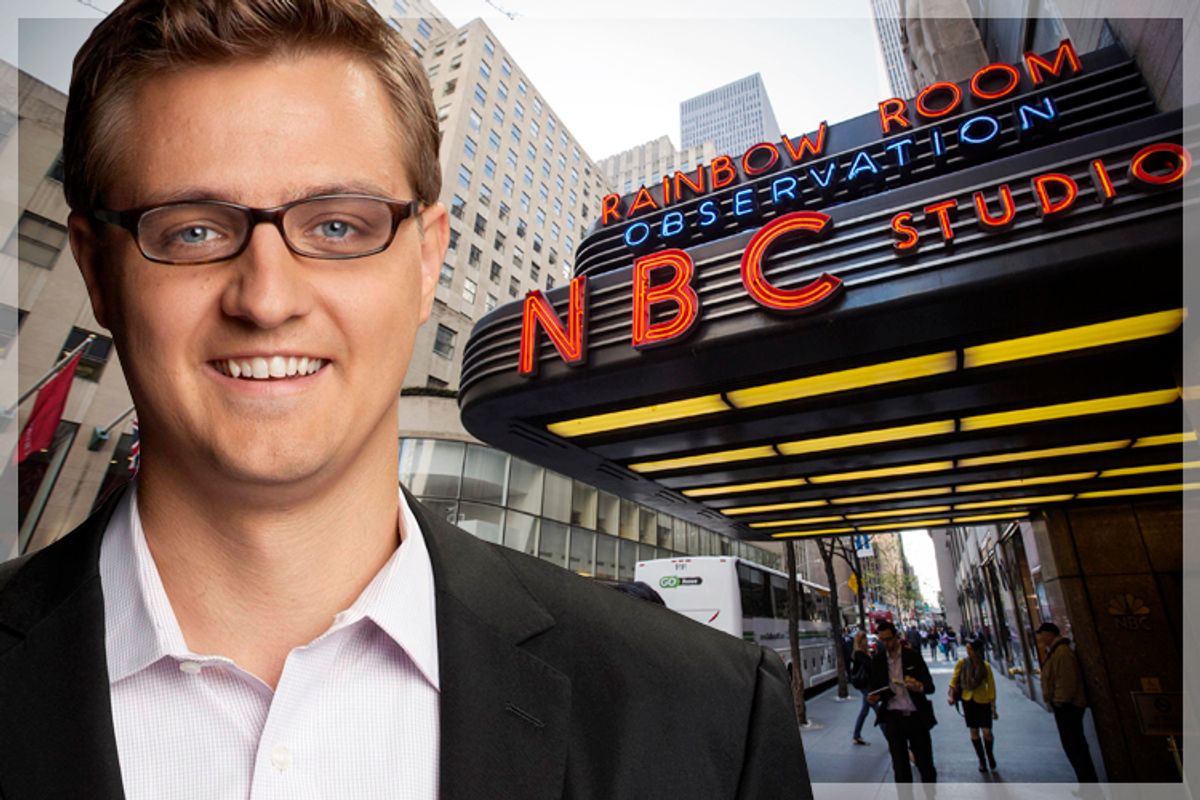 Amid workers alleging union-busting by an NBC Universal-owned company, MSNBC's prime-time host Chris Hayes recently met privately with a group of them to hear their concerns, according to several people present at the meeting.

Hayes is one of five prime-time MSNBC hosts – along with Rachel Maddow, Al Sharpton, Lawrence O’Donnell and Ed Schultz – whose support the Writers Guild of America–East is seeking in an ugly labor struggle with Peacock Productions, which is owned by NBC Universal and has produced programming for MSNBC. A petition posted by the AFL-CIO and hosted by MoveOn.org Civic Action asks the five hosts to “Please meet with these workers and take a public stand to support their right to organize” at Peacock Productions. None of the five has so far publicly addressed the issue.

Hayes, Maddow, Sharpton and O’Donnell did not comment in response to Monday inquiries (sent to MSNBC or personal email addresses, to Sharpton’s National Action Network, and to Random House, which published Maddow’s book; Random House referred the inquiry to MSNBC).

But, asked about the campaign, Schultz emailed Salon, “Moveon.org has never been an ally of Ed Schultz, why should I help you with a story? Give me a reason.” A follow-up email was not answered. (The email came from a personal address provided to Salon by people who have been in touch with him there; following a series of inquiries, an MSNBC spokesperson said, "I can't confirm that e-mail address," but declined to dispute that it belonged to Schultz.)

In apparent contrast to his colleagues, Hayes met with Peacock Productions workers in a private meeting with WGA-E staff at the union’s office, according to people who were in the room (Hayes did not respond to a Monday request to comment on that account). “We presented our case to Chris Hayes and he understood what we were dealing with …” Peacock Productions worker David Van Taylor told Salon. “I don’t know whether Chris Hayes will do anything in support of us – you know, of this campaign. I have no idea. But he listened and he heard us. And you know, I appreciate that he took the time to listen.”

WGA-E organizing director Justin Molito confirmed the meeting but said he could not provide further detail on the private sit-down. He said the union saw MSNBC’s prime-time hosts as “natural allies in the rights of employees that work in the same building as them, and for the same company as them.” Peacock Productions’ programming includes Investigation Discovery’s true-crime show “I’d Kill for You” and political documentaries for MSNBC.

Molito alleged that NBC Universal – owned by Comcast – was guilty of hypocrisy, treating Peacock Productions workers in a way that defied the values promoted on its cable channel, MSNBC: running “a textbook anti-union campaign that you would see at companies like Wal-Mart”; attempting “voter suppression” by preventing union election ballots from being counted; and exploiting the “right-wing extremist takeover in Congress” by mounting National Labor Relations Board stalling tactics abetted by recent Senate obstruction. An NBC spokesperson referred an inquiry regarding the Peacock Productions dispute to a colleague, who did not respond to a request. In an August statement provided to the LA Times, NBC said, "We believe that Peacock’s producers hold meaningful supervisory authority, which, according to Federal Labor Law, excludes them from voting."

After nonfiction writers and producers set out to win a union last year, alleged Molito, the company responded with mandatory group meetings and one-on-one conversations in which managers pushed an anti-union line, and a spurious legal case that got the votes from a union election impounded (and thus left uncounted to date) by arguing many workers seeking union recognition were in fact supervisors and thus ineligible. “The idea that a group of workers that wants to organize, who actually does not have supervisory authority, should be ‘protected’ by disallowing them to vote is patently absurd,” said Molito.

“Some of it could be very intimidating,” said Van Taylor. He told Salon that managers “said that they were worried – both in public meetings and in private meetings – that they would be shut down if a union passed here.” Producer/writer Steve Rivo, who was working at Peacock at the time, said that in meetings managers “specifically referred to possible outcomes of a pro-union vote, one of which included the possibility that Comcast … might just simply dissolve Peacock … It was made very clear to the whole company that the group of people who were interested in joining the Writers Guild could actually bring down the whole company.”

Rivo, who last worked for Peacock in July, said that once his support for WGA-E was known, “my assignments were not as forthcoming as they were before.” Van Taylor echoed that allegation: “A pattern seemed to be developing where the people who had spoken up on behalf of the WGA-E were being last to be assigned to jobs or to have jobs.” Van Taylor said he and other openly pro-union workers heard that their co-workers were being criticized by management “just for like being friendly to us,” rather than shunning them for supporting the union.

Wilma Liebman, who chaired the National Labor Relations Board under President Obama, told Salon the cases she’s seen “would indicate that’s fairly common practice” for companies to compel employees to attend anti-union meetings when a union drive is afoot. In such situations, it’s generally illegal for companies to make explicit threats or punish workers for union activism, but legal for them to make dire “predictions” about what could befall them if they unionized. Liebman noted that the question of who counts under law as a “supervisor” who is excluded from collective bargaining rights “has vexed the board and representation issues from the beginning.”

Rivo, a 20-year veteran of the industry, said that like him, “many formerly independent documentary producers are now working as weekly wage workers in the nonfiction TV industry,” and thus seeking contracts that guarantee pay, health coverage and residuals. Van Taylor said he’d been spurred to get involved with the union by comparing the “sense of insecurity and lack of control” where he worked to the conditions for union members employed on fiction shows: “You can see that, you know, it’s possible to have a career as a freelance writer that’s not completely insecure and uncertain at all times.” In an e-mailed statement, AFL-CIO Organizing Department Director Elizabeth Bunn charged that Peacock Productions "proves that wage inequality is not limited to so-called low-skilled occupations."

Given that “very positive” coverage of worker struggles is “part of their brand” at MSNBC, said Van Taylor, its hosts “should know what’s going on in their own company.” He added, “We would like the viewers of MSNBC to know that if they support workers’ rights, they should be supporting the workers at NBC.”

“People like Ed Schultz and Chris Hayes and Rachel Maddow report frequently on and are quite supportive of the American labor movement,” emailed Rivo, “so we feel that it would be fitting for them to express support for their colleagues who are writing and producing shows on the same network, but who are being denied the opportunity to join a union.” Rivo was not in the meeting with Hayes.

Hayes' and Schultz's shows, and weekend host Melissa Harris-Perry's, have been distinguished from their colleagues' and competitors' by much more frequent appearances from low-wage workers or union officials. In August, Hayes told Yes! Magazine that “Labor issues are getting more coverage than they’ve ever gotten before on cable news, first and foremost thanks to Ed Schultz, and then assisted by others of us who’ve taken up that mantle.”

If an MSNBC personality did choose to voice support for fellow Comcast/NBC workers during their time off-air, would federal law against anti-union retaliation offer them any protection from corporate pushback? Liebman noted that the answer would depend on whether they were hired through “an employment contract, or a contract for services,” whether they met one of the dozen criteria for being supervisors (excluded from protection), and whether they fell under the Supreme Court’s standard for “managerial” status (also excluded): those who “formulate and effectuate management policies by expressing and making operative the decisions of their employer.” In addition, said Liebman, “There have been some cases where the discharge of a supervisor has been held to be unlawful if it is intended to interfere with ongoing organizing efforts.” (Even in cases where workers are squarely covered by law, unions and their allies have long questioned current law’s efficacy at avenging or averting illegal retaliation.)

“I think any time workers are speaking out in favor of collective bargaining and speaking out in favor of the right of themselves and fellow employees, there is risk involved …” WGA-E’s Molito told Salon. “The degree of that risk, I think for an MSNBC host is likely less than the risk that’s already been taken by hundreds of workers in campaigns across the country.” He said the union would “love for them to speak publicly to whatever extent they’re comfortable with, but the call is really for them to show solidarity in a way that they can show solidarity, and in a way that they think is the most effective for them to do so.”

“If we lose unions, we lose the concept of solidarity itself,” Hayes wrote in a 2006 essay in In These Times, where he regularly covered labor before moving to the Nation and his current post at MSNBC. “And it’s hard to imagine we won’t become worse people for it … As the American right offers that redundant canard ‘moral values’ as its lodestar, the left should offer solidarity. Not retrograde brotherhood, or faith-specific fellowship, but something more robust and difficult and rewarding. The uplift of collective enterprise.”