My critics have "income envy": Ed Schultz unloads after backlash to his union quote 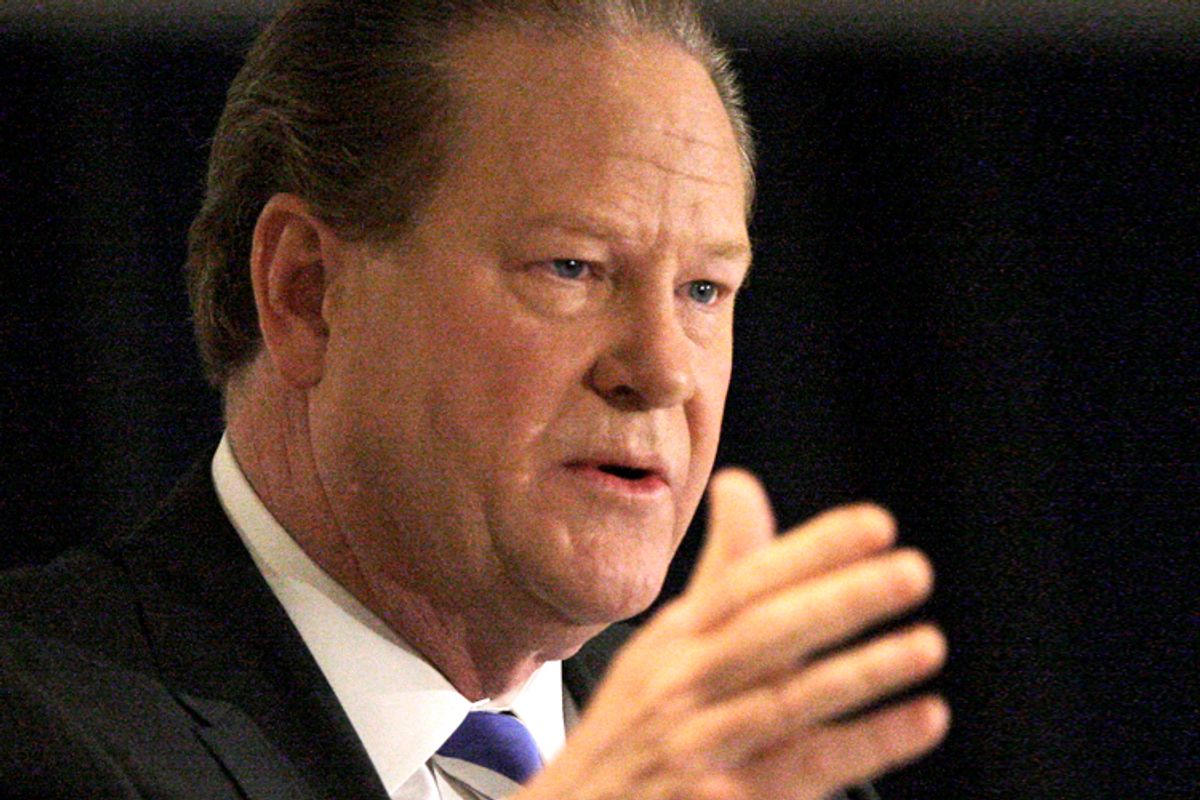 After a Salon report depicting Ed Schultz's handling of a dispute between a group of NBC workers and the network led to criticism of the host, he took to the airwaves Thursday to address the backlash. As Salon reported Thursday morning, workers at Peacock Productions have attempted to land meetings with MSNBC's top hosts in an effort to win their support -- and successfully managed to meet with Chris Hayes, while Schultz gave Salon a comment that elicited some negative reactions.

In response, Schultz addressed the matter in the first segments of his radio show Thursday afternoon, professing his vocal support for organized labor and slamming Salon’s reporting, but not specifically addressing alleged union-busting by the NBC Universal-owned company Peacock Productions.

“Are they that freaking stupid that they don’t know where I stand?” Schultz asked listeners. “Wow.” Schultz also suggested he wasn’t necessarily “able to influence” someone “of authority,” and asked “why should I put myself in jeopardy through an email?”

As Salon reported Thursday morning, workers at Peacock Productions charge that after they started organizing with the Writers Guild of America–East, the company held mandatory group and one-on-one anti-union meetings; suggested that unionization could lead to the company being dissolved; discouraged employees from talking to pro-union co-workers; discriminated against pro-union workers in assigning work; and used a spurious legal argument to get the results of a union election impounded by the National Labor Relations Board. (NBC has not provided comment on those allegations, following a series of inquiries since Tuesday.) In response, the AFL-CIO posted a petition, hosted by MoveOn Civic Action, asking for public support from five prime-time MSNBC hosts: Chris Hayes, Rachel Maddow, Lawrence O’Donnell, Al Sharpton and Schultz.

While none of the hosts publicly declared support for the the campaign, several people who were in the room told Salon that Hayes recently met privately with Peacock Productions workers at the WGA-E office and heard their concerns. Hayes, Maddow, O’Donnell and Sharpton did not respond to inquiries for Thursday’s story.

But Schultz sent a two-sentence response to Salon’s request for comment on WGA-E's request for his support: “Moveon.org has never been an ally of Ed Schultz, why should I help you with a story? Give me a reason.” He did not respond to a follow-up email. (MoveOn did not immediately reply to a Thursday afternoon inquiry.)

Schultz's response, printed in Thursday’s article, drew him some criticism on Twitter.

On his Thursday afternoon national radio show, Schultz defended himself and critiqued his critics. At the start of his three-hour show (not affiliated with MSNBC), he told listeners they could call in if “you want to talk to me directly. Maybe you’ve seen something in the Twitter world that … you’re not really sure about …” He said he was “not gonna punch down,” and that he had “always supported people when it comes to collective bargaining" and "never wavered one bit ever.”

Then Schultz said, “If you’ve got issues or you’d like to call me on something, this is the format – you’re not gonna see me on anybody else’s television show, you’re not gonna hear me on anybody’s else’s radio show – I have plenty to do.” He said there were “a lot of things out there that people don’t know what the hell they’re talking about,” and that he couldn’t “clear the breach with one phone call” or “one returned tweet,” but “I can be here consistently to give you a real sense of who I am, what I believe in, and cutting right to the chase.”

“And so that’s where I’m going to leave all the nastiness that is out there,” Schultz went on, “and I’m not going to lower myself to people who just have got employment envy, income envy, exposure envy, platform envy.” He warned that “there are going to be minions out there that are going to twist and turn and spin and have expectations without going to the source.” Schultz then turned to the phones (“very seldom do I take calls in the very first segment,” he noted, “but I’m willing to do that today”). After indicating no calls immediately arrived, Schultz said sarcastically, “You mean they don’t want to take on Big Eddie here? I mean, I just find that hard to believe.”

A minute later, Schultz took a call from someone asking if it was true that he’d “taken a quarter million dollars from the unions to be their spokesman” over two years; Schultz answered he was “not taking anything from anybody,” but “if people want to advertise on my website, am I supposed to shut my business down?”

Schultz’s second caller asked him, “Why is Josh Eidelson [the author of this piece] not on your show today instead of hiding behind Twitter about a controversy that’s trying to pit progressive media against progressive media?” (Note: I had not been invited on Schultz’s show.) After Schultz asked who he was talking about and the caller described the morning story about Hayes’ meeting with Peacock Productions workers, Schultz said, “I don’t advertise every meeting that I have. No one knows who I’ve met with. No one.” Schultz then asked, “Do you think the management and ownership” of MSNBC and his radio show “know who Ed Schultz is? Do you think they know what I stand for? Do they think they know what my position is? Of course they do. Absolutely they do. It is unvarnished, OK? It is – it is unvarnished.”

He continued, “So because I don’t answer a reporter’s question doesn’t mean that something didn’t happen, and I’m not going to punch down – there’s some people that are media wannabes, that want to be out there and I’m not going to publicize every meeting I have.” (Peacock Productions worker David Van Taylor, who was in the meeting with Hayes, told me Tuesday he was not aware of any meetings with any other hosts.)

Schultz's caller chimed in, “If a celebrity doesn’t say hello to a reporter, all of a sudden they’re giving them a snub.” Schultz responded, “Absolutely. And the reporter called – he sent me an email, didn’t even have the courtesy to call me.” (Following the show, along with an email seeking comment for this story, I reached out over phone and email seeking to schedule a phone interview; neither received an immediate response.)

Schultz then paraphrased his Tuesday email, and added, “If MoveOn.org has never been a fan of Ed Schultz, why should I put myself in jeopardy through an email? ... I don’t need some writer who’s got an agenda or wants to pit somebody against somebody else. I’ve got plenty of platforms.” Given that, Schultz said, “Why would I put myself in a position – I don’t have to answer to him or to anybody else.” After saying, “I support collective bargaining across the board,” Schultz asked, “Are they afraid to quote what Ed says on MSNBC on 'The Ed Show'?" (Disclosure: I appeared once on Schultz's MSNBC show, and a couple times on his radio show with a guest host.)

Schultz told listeners he “could turn this around on Salon” and MoveOn, and ask, “How come you guys haven’t done more on the TPP” trade deal. “I seem to be the only one in the media that’s doing it,” said Schultz, noting he “did it again last night with James Hoffa.” (Note: I most recently covered the TPP in a Wednesday story, quoting critics including Hoffa.)

“I become the target,” charged Schultz, “because I’m living good. I become the target because I have a platform. As if I’ve been hiding my position on collective bargaining. Are these people stupid? No, they’re just out to take somebody down who’s got something they don’t have.” (My Thursday story noted that Schultz’s show, Hayes’, and their colleague Melissa Harris-Perry’s are set apart by more often bringing union officials or low-wage workers on as guests, and quoted a worker naming Schultz, Hayes and Maddow as hosts who "report frequently on and are quite supportive of the American labor movement.”)

Schultz also took issue with former Salon columnist and current PandoDaily reporter David Sirota, who he noted had written on Twitter during the show that Schultz’s callers were “hammering him for bailing on organized labor … interesting.” Schultz shot back on air that it was “interesting that you have had class envy on me for years, that you’re never going to be as big as I am. That’s what you’re all about, Sirota.” After the subsequent caller expressed his support for Schultz, the host brought Sirota up again, saying he “throws accusations and takes other people’s material as gospel. He’s a loser.” Asked for comment, Sirota emailed Salon, “As those like Chris Hayes clearly understand, workers aren't TV show props -- they are real people who deserve a minimal level of respect from media personalities who purport to speak for them. Only a true narcissist would respond to calls for solidarity by slamming people as ‘jealous.’”

Without directly addressing the union-busting allegations Peacock Productions workers have leveled against NBC, Schultz's response to a subsequent friendly caller appeared to reference the calls for him to weigh in. “Because someone may have a different view, or someone of authority may view things differently,” said Schultz, “doesn’t mean, because I have a position on something, that I’m going to be able to influence them, OK?” (The man had called to tell Schultz, "Your message and your concern for the working man, I have never seen you once deviate from that message.")

Asked about Schultz’s response, WGA-E organizing director Justin Molito emailed, “I can understand the reluctance of any worker to speak out about important issues like the need for collective bargaining. However, thousand[s] of workers across America, and many at NBC in the Peacock campaign have decided that the risk of not speaking out are far greater.” Molito said he could not comment on whether any hosts other than Hayes had met with the union about the alleged intimidation campaign.