The real New Atheism: Rejecting religion for a just world

Hitchens didn't think rejecting religion would solve everything. But he knew only reason would give us justice 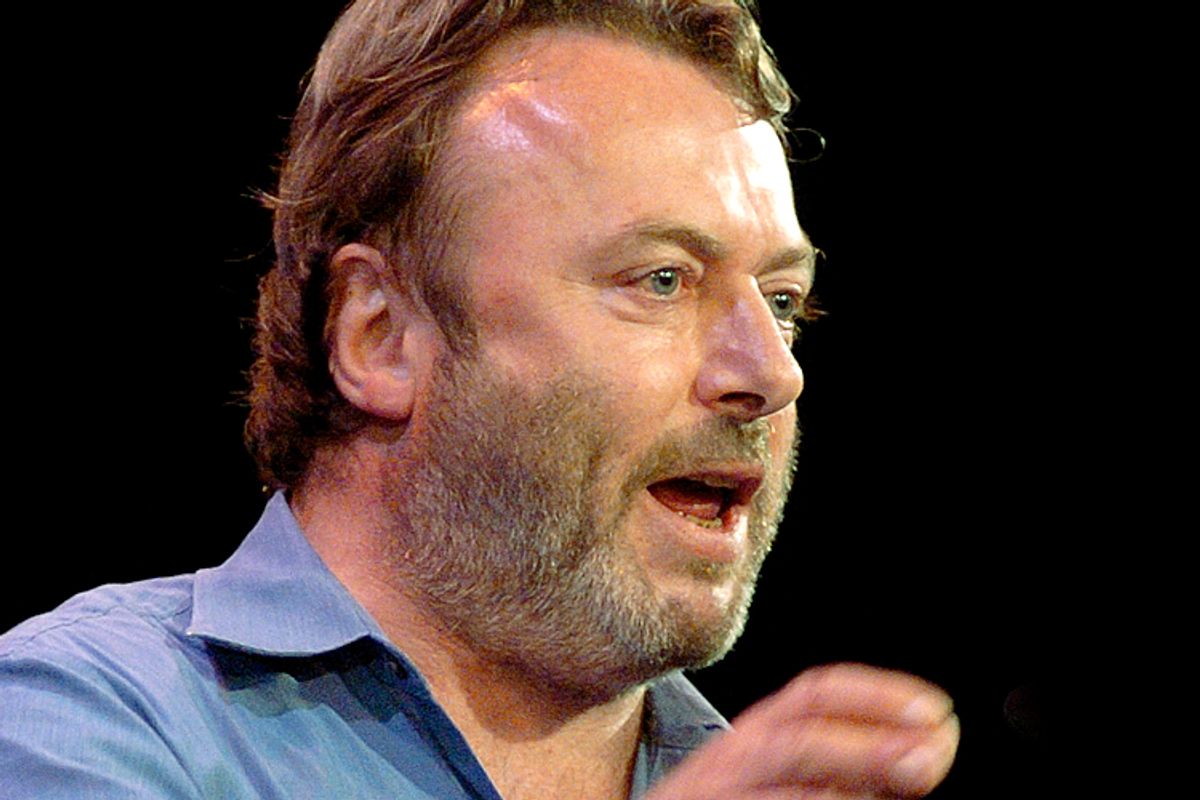 The ever-polemical atheist author Christopher Hitchens died two years ago this month, yet his incisive, erudite diatribes against religion continue to rile the faithful and spark debate. The latest anti-Hitch outburst comes from Sean McElwee, a writer and researcher of public policy who describes himself as “a poorly practicing Christian who reads enough science to be functional at dinner parties.” McElwee calls for a “truce” between believers and nonbelievers. But he stands on the losing side of both public opinion trends and history. According to a Pew poll conducted in 2012, a record number of young Americans – a quarter of those between the ages of 18 and 29 -- see themselves as unaffiliated with any religion. Atheists’ ranks are swelling, and believers are finding it increasingly difficult to justify their faith.

McElwee begins by calling the New Atheist movement “a rather disturbing trend” in a country “whose greatest reformer” – Martin Luther King, Jr. – “was a Reverend.” Dr. King won fame as a civil rights leader, not as a religious figure. McElwee would do well to recall the words of Founding Father John Adams: "the Government of the United States of America is not, in any sense, founded on the Christian religion.” McElwee goes on to attribute to New Atheists an unsound premise of his own concoction:

1.  The cause of all human suffering is irrationality

3.  Religion is the cause of all human suffering

Hitchens’ most notorious atheistic tome is entitled "God Is Not Great: How Religion Poisons Everything." But no serious reader could conclude from this book (or from the writings of the other New Atheists -- Richard Dawkins, Sam Harris and Daniel Dennett -- whom McElwee also hopes to debunk) that he considers religion the sole wellspring of humankind’s woes. Though he derided religion long before and after he published "God Is Not Great," Hitchens never said any such thing, and no reasonable person would believe it. Are cancer and flesh-eating bacteria manifestations of irrationality? What about about wars over territory or natural resources? Poverty and inequality? Bullying and bulimia? The “classical logical error of post hoc ergo propter hoc” McElwee ascribes to New Atheists simply does not exist.

McElwee then jumps to Hitchens’ (misbegotten) support of the second Iraq war and attempts to press it into service to discredit him in matters of faith. Hitchens, as McElwee correctly notes, opposed the 1991 invasion of Iraq, but when George W. Bush was in office, according to McElwee, Hitchens “decided that, in fact, bombing children was no longer so abhorrent” because the 2003-2011 conflict was to be a “final Armageddon between the forces of rationality and the forces of religion.” No, this was not how Hitchens viewed the second Iraq war. He advocated invading Iraq to overthrow Saddam, who was, he contended, guilty of crimes against humanity, and he (mistakenly) assumed a stable democracy would result from the dictator’s ouster.

Hitchens understood the secular nature of Saddam’s Ba’ath Party, which made all the more puzzling and problematic his stubborn insistence that Saddam was colluding with Al Qaeda. But McElwee then asserts that “the force of rationality and civilization was led by a cabal of religious extremists” – in the Bush administration -- which “was of no concern for Hitchens.” George W. Bush was a convert to Evangelical Christianity, which does not necessarily make him a “religious extremist,” and the (mixed) faiths of the Iraq War’s other architects (Dick Cheney, Condoleeza Rice, Paul Wolfowitz, Douglas Feith, et al.) did not fuel their zeal for deposing Saddam.

McElwee proceeds to mischaracterize Hitchens’ post-9/11 worldview as a “war between the good Christian West and the evil Muslim Middle East.” How McElwee can expect us to believe this of Hitchens, who authored a book ("The Missionary Position") denouncing Mother Theresa as a fraud and relentlessly attacked Christianity, baffles me, as does McElwee’s blindness to his own blunder. Is Hitchens now, according to him, pro-Christian?

McElwee also falsely attributes obscurantist motives to New Atheists. “Might it be better to see jihad as a response to Western colonialism and the upending of Islamic society, rather than the product of religious extremism? The goal of the ‘New Atheists’ is to eliminate centuries of history that Europeans are happy to erase, and render the current conflict as one of reason versus faith rather than what is, exploiter and exploited.”

Stripping jihad of its religious grounds invites nothing but confusion. Jihad in Arabic means “struggle,” but, with respect to Islam, denotes “a struggle in the name of faith,” which includes holy war against infidels waged as a matter of religious duty.  Such jihad is, ipso facto, religious. Informed readers also know that jihadists, in their addresses to the Muslim umma, rail against Western occupation of Islamic lands, “infidel” Western-backed dictators in Muslim countries, and so on -- all the while citing passages from the Quran. Hitchens and Dawkins, both Europe-born and versed in their continent’s past – a past replete with religious and political conflicts of all kinds -- have never sought to “erase” its history or present “the current conflict” as solely one of “reason versus faith.”

McElwee then tendentiously defines religion so as to paper over its often decisive role in precipitating conflicts. Though he allows that it might “motivate acts of social justice and injustice,” “[r]eligion is both a personal search for truth as well as a communal attempt to discern where we fit in the order of things.” Religion first and foremost consists of unsubstantiated, dogmatically advanced explanations for the cosmos and our place in it, with resulting universally applicable rules of conduct. A good many of these rules – especially those regarding women’s behavior and their (subservient) status vis-à-vis men, and prescriptions for less-than-merciful treatment of gays – are repugnant, retrograde, and arbitrary, based on “sacred texts” espousing “revealed truths” dating back to what the British atheist philosopher Bertrand Russell justly called the “savage ages.” (Islam by no means has a monopoly on such rules – check Leviticus for its catalogue of “crimes”: working on the Sabbath, cursing one’s parents, being the victim of rape – that merit the death penalty.) Just how such “holy” compendia of ahistorical, often macabre fables are supposed to help anyone in a “personal search for truth” mystifies me.

Lacking any alternative, McElwee then tells nonbelievers to lay off the faithful: “any critique of religion that can be made from the outside (by atheists) can be made more persuasively from within religion.” The last time I checked, those “within religion” who denounce religion as untrue, unfounded on fact, irrational by its nature and preying upon our fears, would in fact be atheists. The problem is not, as McElwee says, “the Church’s excesses” – but the Church itself, its backward rules, its reactionary ethos, its groundless assertion of moral authority. The latter is laughable, especially regarding the Catholic Church, in view of the catalogue of crimes – including the persecution of Jews, the Crusades, the Inquisition and silence with respect to Hitler’s Final Solution -- for which it bears self-admitted guilt. If one breaks free of the racket of faith, then faith-sanctioned strictures, fantastic tales (human parthenogenesis among them) demanding faith to be believed, to say nothing of the justness of tax exemptions for faith organizations, all appear as entirely human creations that are questionable at best, criminal at worst, and certainly deserving of no kid-glove treatment.

“The impulse to destroy religion will ultimately fail,” McElwee claims. Just what he means by this is unclear. Hitchens spoke out tirelessly against religion but never believed it could be eradicated; rather, he likened it to Camus’ plague-infected rats, scurrying about in humanity’s sewer, ever awaiting a chance to reemerge. Hitchens certainly never foresaw the bizarre scenario McElwee outlines: “Banish Christ and Muhammad and you may end up with religions surrounding the works of Zizek and Sloterdijk (there is already a Journal of Zizek Studies, maybe soon a seminary?). Humans will always try to find meaning and purpose in their lives, and science will never be able to tell them what it is.” New Atheists have never assigned science such a role. Hitchens himself often recommended the consolations of literature for this purpose. The broader point rationalists make is simple: People, having set aside fairy tales and mandated moral certainties delivered from on high, must seek meaning on their own, seek to order society in ways beneficial for all, and do so with reason as lodestar.

So what is to be done? McElwee trots out the idea of a truce – “one originally proposed by the Catholic church and promoted by the eminent Stephen J. Gould,” that “Science, the study of the natural world, and religion, the inquiry into the meaning of life (or metaphysics, more broadly) constitute non-overlapping magisteria.” One straightaway must regard as suspect a “truce” advocated by an organization guilty of repressing scientists and opposing the scientific Weltanschauung. And one would be right to be suspicious, according to McElwee’s proposition: “Neither [science nor religion] can invalidate the theories of the other, if such theories are properly within their realm.” Just what the boundaries of those realms are and who decides them have been matters of contention since time immemorial. Just ask Galileo.

McElwee next concludes that “religion (either secular or theological) does not poison all of society and science should not be feared, but rather embraced.”

No one is waiting for McElwee’s green light to “embrace” science, which holds its place among us by virtue of its proven utility, its lab-tested veracity. At this point, McElwee’s second citation of Martin Luther King cannot avail him. “Science deals mainly with facts; religion deals mainly with values. The two are not rivals.” Dr. King’s saying this does not make it so. Faith and reason are fighting for supremacy the world over, and rationalists must make their case with ardor, shying away from no battle. Atheists who wobble in defense of nonbelief would do well to recall 9/11, Baruch Goldstein’s Hebron massacre of Palestinians, the Salem witch trials and violence meted out in the name of religion to “unchaste” women throughout the ages. This is, of course, an incomplete list of atrocities motivated by religion.

The sooner we accord priests, rabbis and imams the same respect we owe fabulists and self-help gurus, the faster we will progress toward a more just, more humane future. Enlightenment must be our goal, and that was what Hitchens advocated above all.