Couples are choosing not to marry for a variety of reasons, but some still use the terms "husband" and "wife" 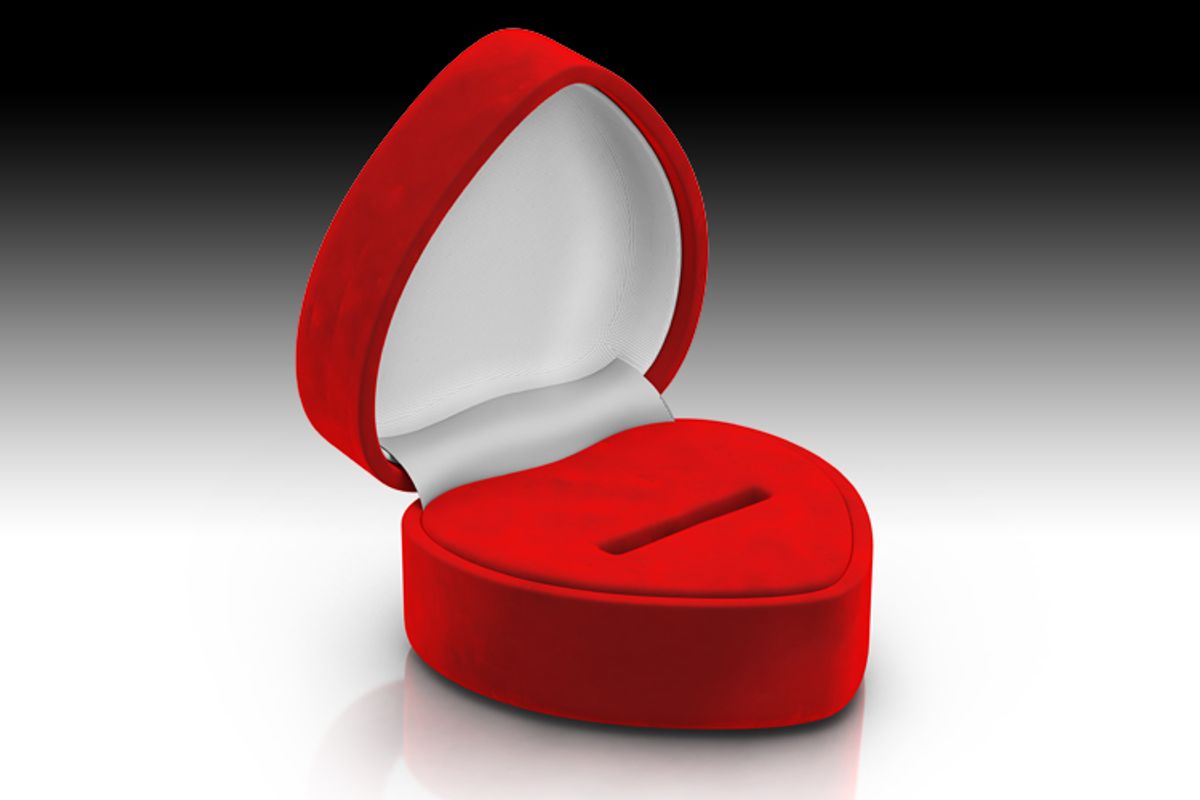 Although heterosexual marriage has reached an all-time low in the United States, the term “single” has perhaps never been more complicated. Filing taxes as a singleton or checking the “single” box in the doctor’s office doesn’t necessarily reflect where many Americans, even those with eventual plans to marry, are with their partnerships or their families. And so some long-term partnered Americans are  “upgrading” their terminology to “husband” and “wife,” even as they express wariness about matrimony.

In 2012, 56 million American households were made up of unmarried women and men, which comes to 46 percent of households nationwide. With marriage increasingly becoming a luxury good, obtained only by the white, elite, educated class, the rest of our country continues to make families outside the construction of marriage. But considering that 40 percent of unmarried straight couples in 2012 lived with at least one biological child (of either partner) – the new normal according to USA TODAY -- “single” still falls short of the contemporary landscape of family.

Brian Grosz, 35, a licensed Brooklyn officiant who actively marries couples, absolutely believes in the institution of marriage – just not for himself. Having been with his “wife” for five years, he does not intend to legally marry her any time soon. He views marriage not so much as "a path to happiness," but simply a legal contract that doesn't innately legitimize a commitment, which he feels he doesn't need.

“I don't think that it's a good fit for me, and the usage of the term ‘wife’ lets other people know about the permanence of my relationship, despite our legal standing.”

Maria Guido, a 40-year-old mother of two in Florida who has been with her male partner for seven and half years, isn’t certain that she will marry. While not necessarily opposed to the legal binding, she considers herself resistant to perfunctory traditions, like marriage, “that people seem to blindly follow.”

“Does anyone really know the function of a bridesmaid?” she asks when observing that the ritualistic pageantry has somewhat tinged the institution for her. Nevertheless, the choice to stick to matrimonial terminologies was “organic” given that both she and her partner are raising a blended family together.

“It seems like the term just automatically grants you more respect for your union,” says Maria, a freelance writer who, like many Americans, doesn’t have the means to fund a wedding. “When I introduce him as my boyfriend, I can almost see the wheels turning in people's heads – ‘Are those his kids?’ It feels easier to say husband. People seem more comfortable with it.”

While she has occasionally used the term “partner,” she says she's not entirely comfortable with it because of its sterility. Nor is she keen on using “boyfriend” and “girlfriend” at this stage in her relationship, as those words trivialize the couple's contributions to their family.

“It feels silly,” she adds.

Twenty-nine-year-old Frances Locke in New York says that her male partner is also adverse to using “girlfriend” because he sees it as implying a lack of a commitment. She uses “partner” interchangeably with “husband” when referring to her children’s father, but reverts to nuptial language when in the presence of those from a “certain generation” due to lingering social expectations.

“The main reason that we use these words is to avoid the judgment that people have for unmarried couples with kids,” says the mother of three. “You would think that this type of attitude would be rare, but we’ve had people call our kids bastards on more than one occasion. Even my mother-in-law has tried to guilt us into marriage, saying ‘well, now that the baby is here, it’s not appropriate that you’re not married.’ People see any choice that doesn’t vibe with their life view as an indictment on their own choices and we’d rather just avoid the drama.”

Early in their relationship the couple purchased rings, and they have discussed getting engaged and/or entering a domestic partnership. But even though Frances and her partner are on the same page regarding commitment, loyalty and monogamy, apprehensions about the institution of marriage remain -- particularly as they relate to the LGBTQ community and women.

“As a bisexual woman, I feel it's pretty messed up that I can only marry because I am in love with a man rather than a woman at this stage in my life, and my partner feels the same way. Now that DOMA has been repealed, we’ve brought the issue up again, but there are still other problematic aspects of the institution that bother us. Personally, I am uncomfortable with the history of female ownership that marriage comes with.”

Despite a political opposition to being a legally married couple, they are nevertheless content to pass as one. At least for now. They continue to waffle on their plans to marry, but Frances says that in the event that they do, it would be for “practical reasons,” such as health insurance or for travel purposes. With young children, both parents have had to remain pretty close to home when planning vacations. But as the children get older, Frances and her partner plan to take their family to “less Westernized areas,” and not being legally married could be problematic.

“Other than that, we see no need for either the piece of paper or the big party.”

Sarah (whose name has been changed to protect her privacy), a 35-year-old medical school student in Washington, D.C., sees the traditional big party as an incentive to get legally married. But five years into a relationship that has yielded a two-and-a-half-year-old daughter, she feels that ship has sailed.

“We're old enough that our parents aren't going to throw us a nice wedding, and that would have been the main draw for me, a great big smashing party,” she says. While she supports marriage as an opportunity to validate unions, she is also discomforted by the societal expectation of marriage, which she says “perpetuates gender-normative behavior.”

Nevertheless, she refers to her daughter’s father as her “husband” in her professional and academic setting.

“We did pick up on a certain stigma when we moved to D.C.,” says Sarah, who made the move from San Francisco. “I would say it might be localized to the administration of my school, and maybe some of my younger classmates. But I've definitely noticed it.”

She experimented with the term “fusband” (fake husband), but stopped after too many perplexed looks. Her male partner is more inclined to use “wife” exclusively because “partner” doesn’t affirm that he is romantically involved with a woman. “Boyfriend” and “girlfriend” were consciously eschewed after the couple became parents.

The couple currently has no plans to marry, even though Sarah’s partner is not an American citizen. With the birth of their daughter, he has secured dual citizenship. Even if the family decides to relocate to his native country, Sarah would be entitled to the same benefits as a spouse.

But despite resorting to matrimonial language in her daily life, Sarah resists the notion that she would like to pass as married. She views “husband” simply as shorthand for the live-in father of her child, with whom she is entwined financially and emotionally.

“We could walk down to the courthouse tomorrow if we felt like that would make our lives better. At the same time, it doesn't seem worth the extra effort to explain to some people the ‘interesting’ status of our relationship. I don't find it that interesting, but if someone else seems like they might, I just say ‘my husband.’”