"Dreadful Deceit": Race is a myth 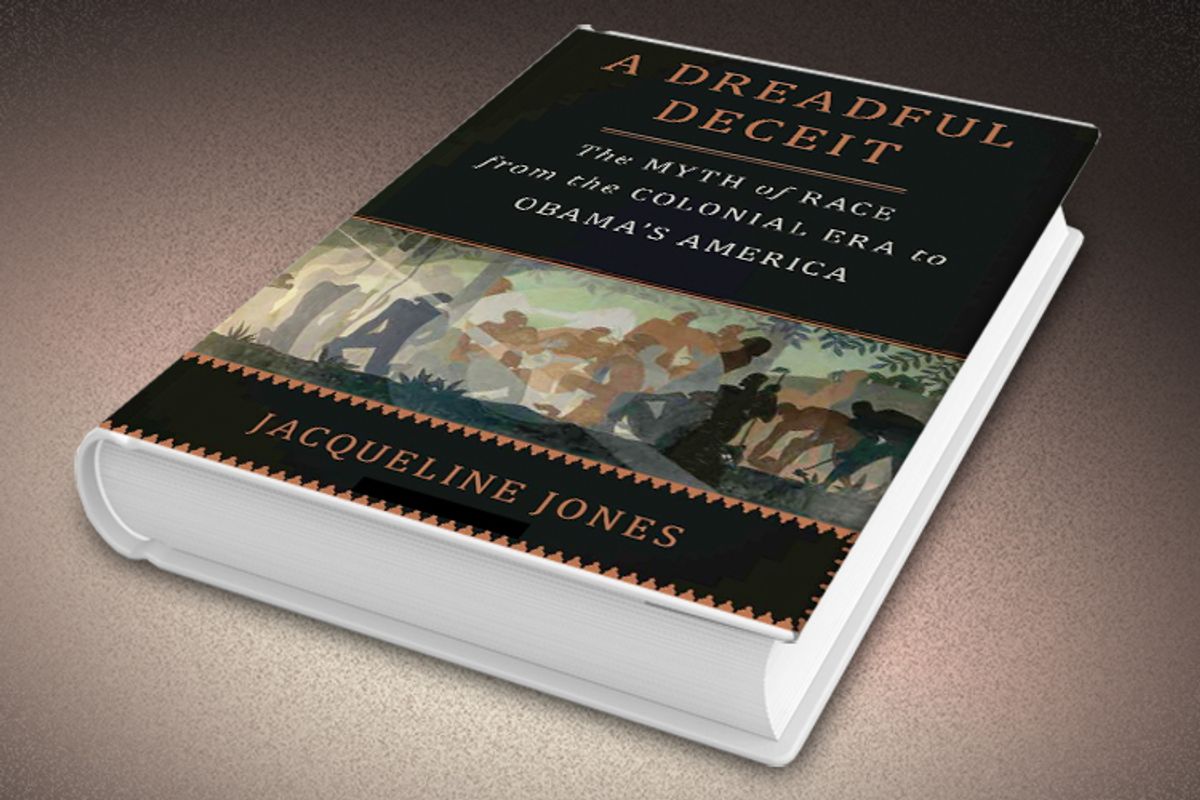 Jacqueline Jones' provocative new history, "Dreadful Deceit: The Myth of Race From the Colonial Era to Obama's America," contains a startling sentence on its 265th page. It comes after Jones quotes Simon Owens, the last of five African-Americans whose life stories she describes in the book. Owens -- an auto worker, labor activist and writer who died in 1983 -- stated, "I understood as a Negro first, in the South, the North, in the union, in the NAACP, in the C.P. [Communist Party] and in the S.W.P [Socialist Workers Party]." Jones adds, "Because generations of white people had defined him and all other blacks first and foremost as 'Negroes,' he had no alternative but to acknowledge -- or, rather, react to -- that spurious identity."

That racial identities are "spurious" is the foundational argument of this fascinating book. Race is a cultural invention, rather than a biological fact (on this scientists widely agree), and Jones, a history professor at the University of Texas and recipient of a MacArthur Fellowship, wants to show how pernicious and persistent this falsity is. In the book's epilogue, she points to an article from the 2012 edition of the New York Times titled "How Well You Sleep May Hinge on Race," based on a study showing that living in high-crime neighborhood or having chronic conditions like diabetes or hypertension can cause insomnia. But, as Jones observes, these are problems deriving from poverty, not race, and so the article "blatantly conflated socioeconomic status with the idea of race."

Of the five people whose life stories are told in "Dreadful Deceit," the first is essentially voiceless: an enslaved man named Antonio, abducted from his homeland in Africa and murdered while being "corrected" by a colonial landowner in 17th-century Chesapeake. As Jones relates, Antonio's race "had no practical meaning" to the man who purported to own him, Symon Overzee. Describing in well-researched detail the economic and political milieu of the time, she argues that what created Antonio's vulnerability to Overzee was not his skin color or any other physical trait but his uprootedness, "without a tribe or a nation-state to protect and defend him in the Atlantic world."

In the revolutionary era, Jones singles out Boston King, born into bondage but able to escape the many designs on his freedom laid by opportunistic American and British whites during and after the revolution. He emigrated to Nova Scotia and ultimately to Sierre Leone. King was part of a group of black men and women who supported the Crown during the Revolutionary War in exchange for their liberty, although holding onto it could be tricky. But Jones is perhaps most interested in conveying the rationales that the wealthy South Carolinians of King's day offered for holding onto their slaves. They "felt no need to justify human bondage by invoking race-based differences; they framed the issue of slavery as a matter of their own self-interest, one they could defend by force without bothering to explain themselves."

It was only when whites felt real pressure to repudiate slavery on moral grounds that they began to concoct theories about how the "nature" of blacks rendered them suitable only for menial labor under the total control of white elites. Sometimes the challenge came from within, as was the case with Thomas Jefferson, whose desire to maintain his luxurious lifestyle forced him to reconcile "Enlightenment theories of liberty with self-interested theories of the limits of liberty." Most propaganda about "race," however (Jones frequently puts the word between quotation marks to emphasize its artificiality), came from the slave-owning classes trying to fend off abolitionists. The consistent refrain in "Dreadful Deceit" is just this: that the very idea of distinct races is a fabrication designed to provide the rich and powerful with a cheap, docile labor force.

None of the life stories in the book supports this argument more forcefully than that of Richard W. White, a Civil War veteran elected to the office of clerk of the Chatham County Superior Court in Georgia. One of his opponents in the election filed suit against White, charging that he was ineligible to hold office in Georgia because he was "colored." White, who was relatively new in town and "from unknown parts and of unknown lineage," appeared to be "white." The evidence marshaled to prove that White was not white consisted, as the judge freely admitted, of "the reputation of the person in his community, that is what he says of himself -- what others say of him -- his associates and his general reputation." In other words, Jones underlines, a man's race in this community "would be a matter not of ethnicity or heritage or appearance or biology. It would be, purely and simply, a social fiction -- one without any appreciable basis in physical reality."

The other individuals Jones profiles include a woman who managed to amass enough real estate in antebellum Providence, R.I., to become the the town's wealthiest black woman and William H. Holtzclaw, who founded a school, modeled after Booker T. Washington's Tuskeegee University, in rural Mississippi in 1908. At times, her thesis gets lost in the particulars of their stories, but this isn't a flaw. The strength of "Dreadful Deceit" lies in its wealth of detail and the precise picture it offers of specific places and times, towns where white workers embraced the ideology of race because it gave them an edge or, conversely, white shopkeepers turned out to be perfectly willing to countenance a black school in their area if good money could be made from doing business with it.

Jones' central argument on the fictitious nature of "race" proves slippery, in no small part because many of the people she writes about don't seem to have examined their own beliefs very closely. Many of them, for example, lacked a concept of the "scientific" and therefore couldn't have made scientific claims about race even if they were so inclined. She clearly admires Owens for his belief that the shared interests of the working class and poor ought not to be divided by the fiction of race. (Owens rejected black separatists and nationalists as well as labor unions that failed to challenge their white members' racism.) According to Jones, he thought of race as "simply a smokescreen -- one that clouded the efforts of all people to secure justice and equality for themselves and their fellow sufferers."

Jones is right, of course, that too much investment in racial division does disempower groups who need all the power they can get. Yet human beings amount to more than just their economic and political interests, and often a person's cultural identification is what feels closest to his or her heart. At the same time, cultural divisions can be as bitter as racial ones.

Jones doesn't address the rise of culture-based identity politics over the past several decades -- a large gap in her account -- but some critique is implied in her embrace of Owens' idea that class identification should take precedence. Race may be a biological myth, but it has become a cultural reality, and it's hard to regard the glories of African-American culture as merely the side effects of deplorable smokescreen. I doubt Jones would argue that they are, but just at the point where you expect her to tackle this knotty issue, "Dreadful Deceit" ends. Fortunately, the reader is left with the stories Jones has told, and they are more than enough.