Ted Williams: Secrets of baseball's greatest hitter -- and an unsung hero on race

We all know Ted Williams is the last player to hit .400. A new biography shows how progressive he was on race 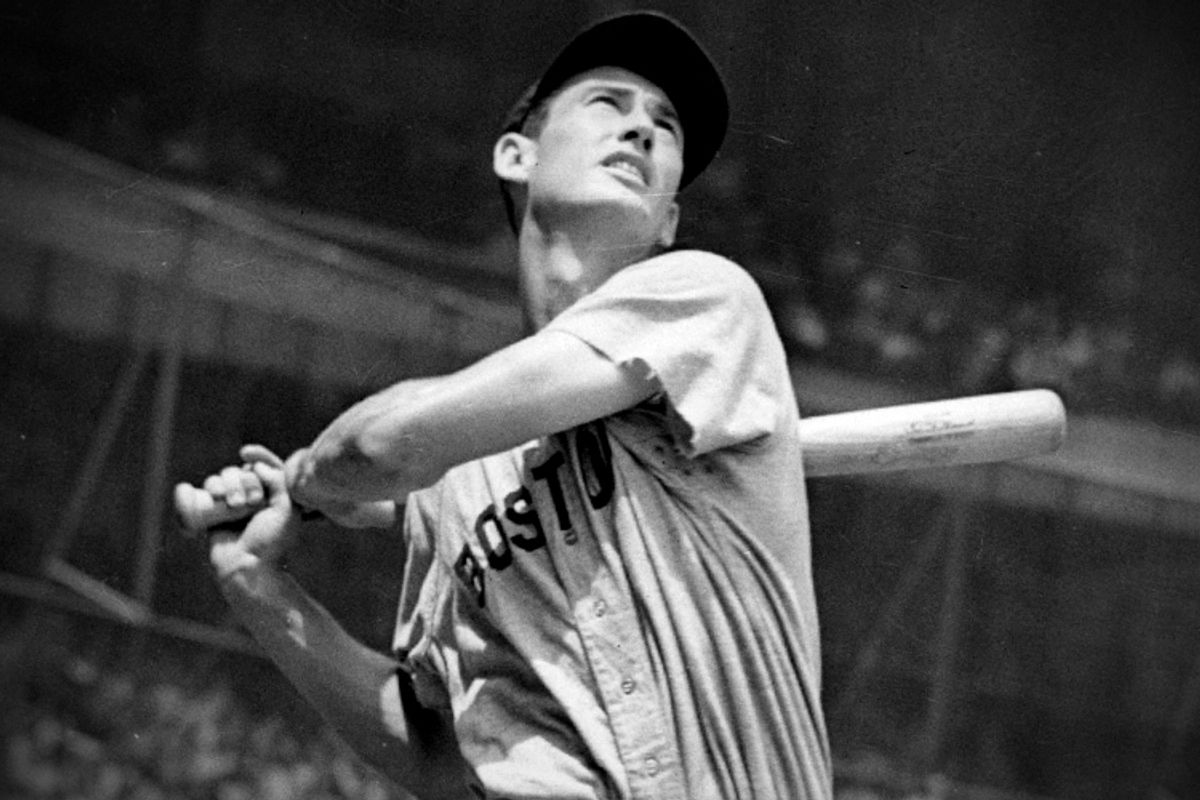 If Joe DiMaggio was baseball’s Cary Grant, then Ted Williams was surely its John Wayne. Some friends thought that in later years Williams developed a persona styled on Wayne’s; it should have been the other way around. Wayne played characters larger than life, but Williams lived a life larger than any character’s. Wayne played Marines in movies; Ted Williams saw the Korean War from the cockpit of a Marine fighter bomber.

He lived big (three marriages, countless affairs), feuded big (many believe at his Hall of Fame induction he mumbled the F-word when describing a longtime enemy in the press who had been dead for years) and swore big (according to a man who knew them both, General Patton was not Williams’ equal at cursing). He left behind a legend big enough to fill several big, rich volumes, most recently and most notably Ben Bradlee Jr.’s "The Kid: The Immortal Life of Ted Williams" (Little Brown).

At over 800 pages, "The Kid" is a book that matches its subject -- and packed with baseball lore, action, romance, profanity and a bizarre sci-fi twist in which the hero dies and his head is cryogenically preserved.

Ben Bradlee Jr., a former reporter, deputy managing editor and Pulitzer Prize winner for the Boston Globe, spoke with us about Williams and his biography this week.

I’ve got to say, I didn’t think it was possible to come up with things about Ted Williams that I didn’t know. You seem to have something new on every page.

I worked on this book for more than 10 years, and I think not a work day went by when I didn’t find some fact or hear some story that I’d never seen or heard before.

Let me get this out of the way. When he was giving his Hall of Fame acceptance speech in 1966, many people thought they heard him say “Fuck Egan,” meaning “The Colonel” Dave Egan, a sportswriter for the Boston Record with whom he carried on a blood feud for years. Do you think he really said it?

Yes, I do. And if he didn’t say it, I can guarantee he thought it.

What knocks me out about that story is that Egan had been dead for years and Williams couldn’t let it go. I’ll bet if they unfroze his head 50 years later he would still feel that way.

And he was, of course, far from the only sportswriter Ted warred with. Don’t you think he exacerbated the situation, constantly pouring gasoline on the fire so to speak?

Oh, he certainly did. But with Egan you have to remember it was good business for both of them, and that was true for other sportswriters in Boston and in fact in every American League city. The press was hungry for all things Ted Williams. One guy in Boston called him “Our Hemingway. He wrote our stories for us.”

Let me get something else out of the way: If you could line up all the hitters in baseball history with all of them at their peak, under the same conditions, against the same pitchers and in the same ball park – would you take Ted over everyone, including Babe Ruth?

Absolutely Ted. You don’t have to make him any allowances for the years he missed in the military to see his greatness, but if you do give him credit for those years, his numbers would be absolutely awesome. Not just the home run totals, and I think he probably would have reached 700, but the points off his batting average by missing those prime seasons.

And not just that. One thing your book made clear to me was the effectiveness of the “Williams shift” --  or, as some called it, the Boudreau shift because it was invented by Lou Boudreau -- which put most of the players on the right side of the field to counteract that dead-pull hitter’s stroke. Why didn’t he go against it by slapping balls to the opposite field?

Pride. Just silly stubborn pride. He just had to show that he could beat it.

Didn’t he realize that he was playing against the percentages, especially when other teams started using it? That by hitting a ball over third base or down into the corner for a double or something might make them stop using it?

He did realize it, but belatedly, and it cost him points on his batting average.

One thing I particularly admire about "The Kid" is that you don’t minimize the distractions that Williams brought to the Red Sox with the constant spats with sportswriters and spitting at fans who booed him – things like that. He did what he did, and you let him take the blame for it. Do you think in some ways he might have hurt his team with this irresponsible behavior?

Yeah, you’ve got to give him the blame for that. I don’t think there’s any way you can make a case that he helped the Red Sox with all the fussing and feuding. But on the other hand, you have to balance that out with the fact that his teammates, most of them, really loved him and believed in him. Dom DiMaggio, Bobby Doerr, others loved him. He went out of his way to help young players, especially with hitting. He was really one of the first batting coaches on a big-league team.

In the book you talk about how much he helped younger players on the Red Sox -- he certainly went out of his way to befriend Pumpsie Green, the first black player for Boston. Whatever else you think about Williams, I think you’d have to say he was years ahead on some social issues …

I think you can credit him with being one of the first to wake up the baseball establishment to the importance of recognizing Negro League greats. At his Hall of Fame speech, he really shocked everyone by saying this out of the blue. Not that it was a completely new topic with him – he had written Jackie Robinson a letter of congratulations when he first came to the major leagues and palled around with Larry Doby of the Indians when he became the American League’s first black player.

Why do you think he was so progressive on this issue?

I can’t say for sure, but it might have had something to do with being half Mexican, on his mother’s side. He was incredibly sensitive on that issue and never let people know about his heritage.

Did he ever learn to speak Spanish?

Why do you think he wouldn’t acknowledge this side of his life?

Probably a couple of reasons. Partly because he was afraid that prejudice would have hurt his career. But he was also resentful towards his mother, who was near fanatical about her work for the Salvation Army and neglected Ted and his brother.

Did he soften on this in his later years?

Well, I think he overcame some of the anger at his mother, but, as we said, Ted didn’t let go of too many things. But it might have been one reason why he bonded so strongly with Nomar Garciaparra, who had a similar heritage and was also from Southern California.

Another thing I like about "The Kid" – I think you frame the relationship between Ted and Joe DiMaggio very well. You include a quote in the book which I think sums it up: “Ted enjoyed being Ted much more than Joe enjoyed being Joe.”

That’s very true. I don’t think Ted resented Joe in any way, though I do think Joe felt some resentment towards Ted …

Ted had no qualms about acknowledging that DiMaggio was the superior all-around ballplayer?

No, outside the batter’s box he knew Joe was a better outfielder and base runner. But he got burned when people suggested that Joe was his equal as a hitter.

I suppose you could say that Ted got a second life, figuratively if not literally, after his son, John Henry, had his father’s body sent to a cryogenic lab and had his head frozen. What do you think was really behind that? Did he think that perhaps the DNA could be reproduced into a whole team of Ted Williamses?

My God, what a thought. No, in some strange way I think it was just a question of not wanting to let go. But it does sound like it would make a great sci-fi movie. You know, some people did call him “The Eternal Kid.”