Loving "Beyoncé" as a black woman: The power of identification in an age of appropriation 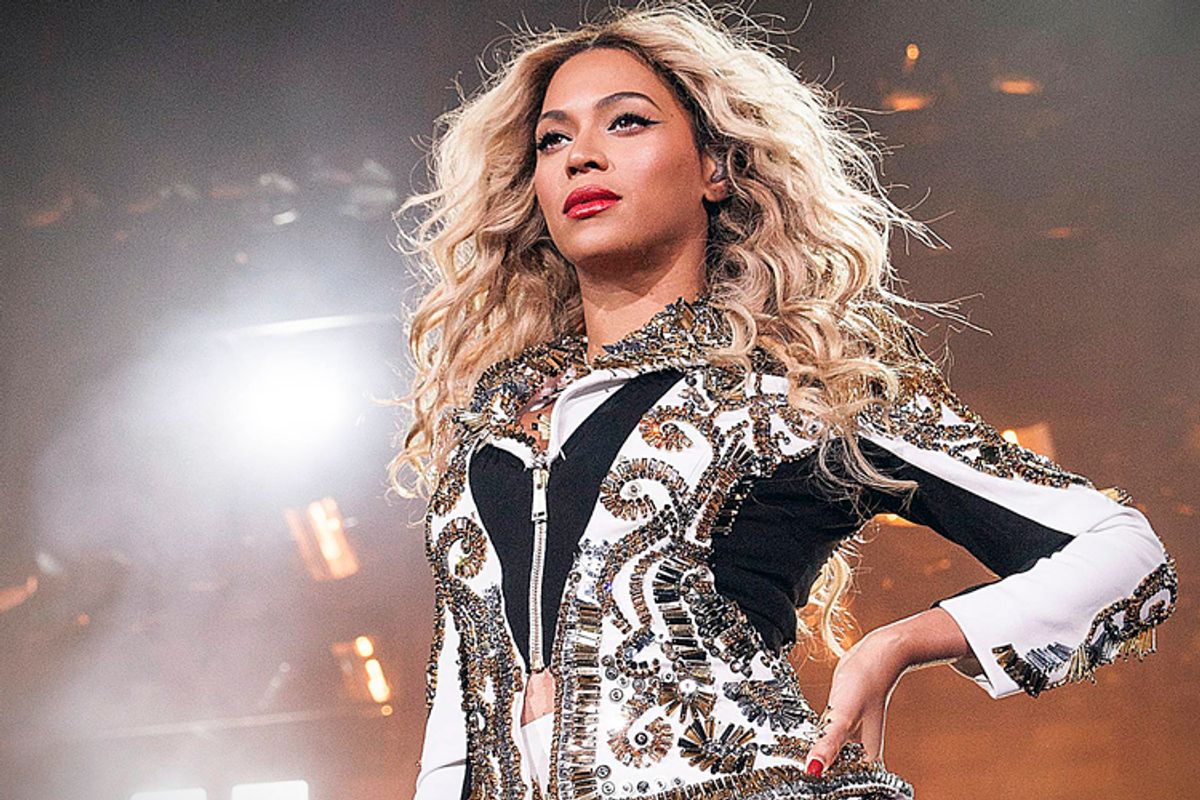 We hadn’t yet recovered from "Scandal" when "Beyoncé" dropped as an iTunes exclusive late Thursday night, and it snapped our collective necks around. The use of digital-exclusive distribution to control its release while flouting conventions of promotion had many people who pride themselves on being insiders scrambling to explain “how,” and left Beyoncé the only one asking “why?” I am a deep fan of this moment. Beyoncé got what she wanted: the ability to be vulnerable, communicate her wants (and how she wanted them) and to call her own shots. Beyoncé the Person revealed parts of herself through Beyoncé the Artist, which only the acumen, work ethic and security of Beyoncé the Billionaire superstar could provide.

As chart-toppingly popular as it is, Beyoncé's music is impossible to appreciate outside the context of her life. Her art is centered around who she is, what she experiences and where she came from. "No Angel" sounds like a romantic ballad and the video looks like a love letter to Houston. Her Houston of candy cars, projects, trunk memorials and strippers. The luminaries of Houston hip-hop are presented with no names. We see her singing to the place she loves because and despite of what is. The complexity of loving her is sonically tied to the complexity of the city’s aesthetic. You can appreciate it on the level of gorgeous Beyoncé and interesting Diane Arbus-like portraits, or you can recognize a complex love song to all facets of the place she sees as creating her. If you get it, you get it. This is how Beyoncé is living right now; you can do with it what you want.

That context includes the fact that Beyoncé is a black woman, and being able to relate to her newest album as one (before the avalanche of analysis in 2013) may have been the most important thing about this album for me. When Alex Hardy sets Kitty Pryde to rights about the lyrics "eat the cake Anna Mae” in "Drunk in Love," it’s a reminder of how flippant people have been with black entertainment. Pryde believes that Jay Z is referencing Japanese anime and uses it to dismiss the track as nonsense. In reality, the lyric is a reference to a scene in the Tina Turner biopic “What’s Love Got to Do With It” where Ike forces Tina to eat a cake for their anniversary, and it has a very specific meaning. Is it problematic? Yes, but rather than being a silly throwaway, it may refer to Beyoncé and Jay Z's relationship and possible bedroom talk between the two. Rather than wonder what it meant, Pryde simply dismisses it, something far too common when it comes to references to black culture.

This year has been a “race-themed” doozy. The experience of being black, living black and making black cultural art has been dissected, refracted and appropriated in ways that sometimes emptied entertainment of enjoyment. Dancing -- particularly twerking and all the vernacular dances that were mislabeled as twerking -- were constant battles. In her documentary “Life Is But a Dream,” Beyoncé references Nina Simone as an artist in control of her medium. These moments reminded me of the song “Images.” Pop culture so often shreds black women by commodifying, deconstructing or degrading them before we get a moment to truly experience them. Seeing someone who looks and moves like you do freely is a beautiful and rare thing. When Trudy of Gradient Lair remembers the dances from “Drunk in Love” as stuff you do in the club, I remember doing it in a living room with my girls in between editing a script. For us, it was a healing moment; for Kitty it was a weak punch line to a weak joke. As scrutiny rises, having a cultural moment to enjoy your relationship to a culture you and a pop star share is increasingly nothing short of magical.

Even as it provides simple joys, Beyoncé also uses this album to make things complicated. Beyoncé answers the “Is she a feminist?” question with a resolute yes. That some feminist sects have an issue with her is not her problem. When “Bow Down” debuted earlier this year, Beyoncé was criticized over her language choice. That snippet is now the intro to “Flawless,” which features an excerpt from Chimamanda Adichie’s TED talk “We Should All Be Feminists” about improving women’s aspirations. The song itself thanks the people in her life: father, mother, sister -- and yes, husband, for helping her become a person who wakes “up like this.” In “Partition,” she shows that being Mrs. Carter doesn’t make her any less of the main attraction. Mr. Carter is presented in snippets and body parts, around the more important spectacle of just how much the Mrs. enjoys what’s happening. You may have unsolicited advice about what their partnership says culturally about sex, but she is far too busy enjoying the benefits of it in spaces she controls. Forgoing the more simplistic either/or proposition, she is happily Mrs. Carter: ardent feminist, Daddy’s girl and loving sister.

Beyoncé challenges her critics and the very nature of the discourse with herself. Rather than take refuge in snark or satire, Beyoncé demonstrates a vulnerability. Feminist calls to action, from Pink’s “Stupid Girls” to Lily Allen’s “Hard Out Here” to Rashida Jones' recent Glamour column, often take a hectoring tone partially cloaked in advice or humor, delivered from a good amount of intellectual distance. Tina Fey may use Beyoncé’s body as an example of the ridiculous requirements of femininity as a punch line. In “Pretty Hurts,” Beyoncé puts herself in the fray. She is insulted, weighed and isolated. The body that Fey mocks is shown as a source of conflict for the whole Beyoncé. Rather than send up or insult the vapidity of beauty culture she validates the desire to “win” while recognizing that merely triumphing or dropping out isn’t a magic solution. Going through this, even as an icon, hurts. Rather than a laundry list or snapshot of branded body parts, Beyoncé uses herself to tell that story.

The act of being a woman in the world is hard, and so much of it is outside our power to control. That is not an issue for Mrs. Carter. In an industry where $25 million press pushes and deeply entrenched racialized sexism often rule artistic decisions, Beyoncé’s will triumphs them all. The complexity of her message mirrors the complexity of her life. Recognizing the simple desires to be happy and loved go hand in hand with a laser focus and world-bending ambition. She got what she wanted, but she recognizes that -- for a girl from Houston -- it takes being a billionaire superstar to do so. In the final video, “Blue,” we see her focus on lovers, dancers, children and musicians. She excitedly picks up dances, samples ice cream, and ends with the sights and sounds of her first child in her arms. She's said her piece -- anything else is just in her wake.