Awards they couldn't accept: The tragic irony of Greenwald, Poitras and Snowden

When I was honored as a top global thinker last week, 3 of my co-recipients didn't come. The reason why is chilling 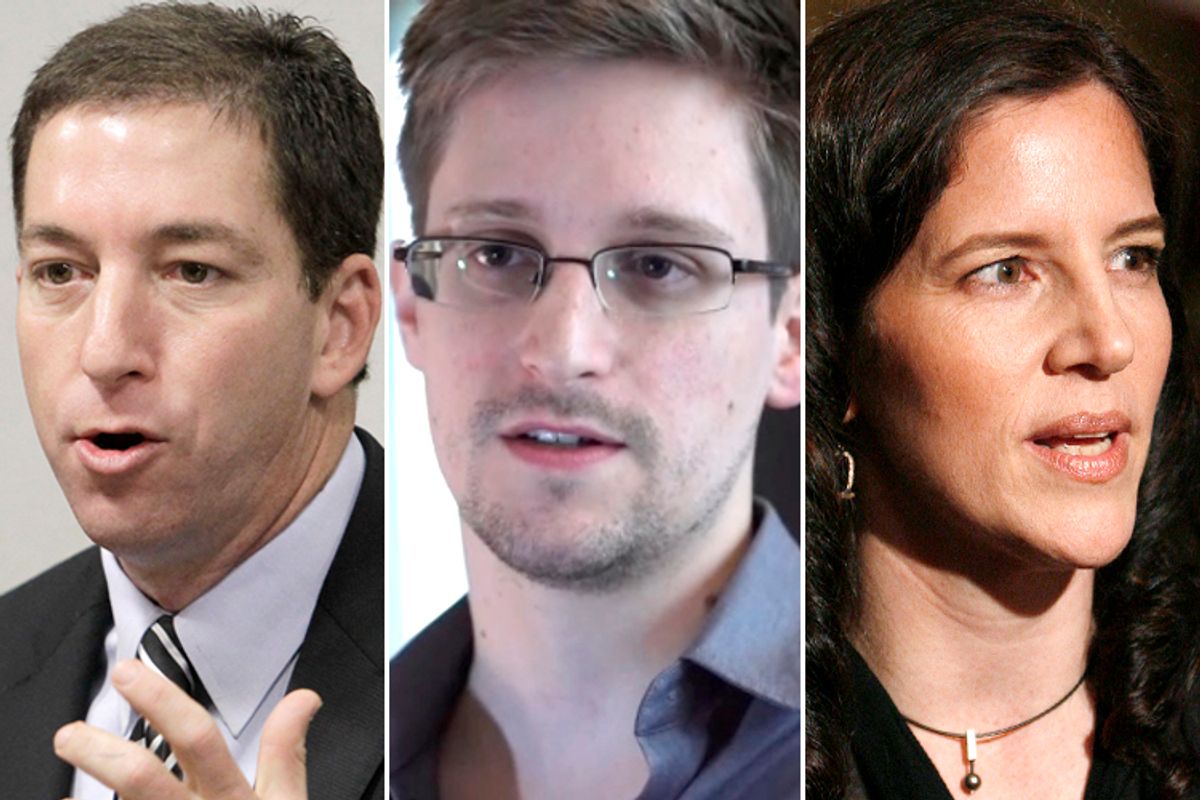 I was humbled to have dinner in Washington, D.C., last week with an incredible group of my co-recipients recognized in Foreign Policy magazine’s 2013 list of leading global thinkers. Conspicuously absent in the category of “The Surveillance State and Its Discontents” were the discontents: Glenn Greenwald, Laura Poitras and Edward Snowden -- not because they did not want to attend but because these three American global thinkers are unwelcome in the United States.

Greenwald has been accused of being a co-conspirator to break the law. The U.S. government has regularly harassed, searched and intimidated documentary filmmaker Poitras at the border. And the U.S. government revoked Edward Snowden’s passport.

Greenwald, Poitras and Snowden are on a growing list of journalists, activists and whistle-blowers who are unable to travel freely because of their First Amendment-protected activities. Their fears of persecution are sadly not exaggerated. The United Kingdom detained Greenwald’s husband, Brazilian David Miranda, for nine hours and charged him with violating an anti-terrorism law because he had met with Poitras and carried information (not some illegal substance or terrorist plans) for Greenwald. WikiLeaks journalist Sarah Harrison, who literally rescued whistle-blower Snowden from Hong Kong, has been advised by her attorneys not to return home to the U.K. WikiLeaks founder Julian Assange has long been the target of a U.S. criminal investigation, and was forced to seek asylum from Ecuador, but cannot get there.

The U.S. has promised not to torture Snowden, but such a “promise” only raises the question: Is that how low a democracy should set the bar -- at not torturing someone -- rather than providing due process and abiding by international humanitarian standards? The Obama administration’s aggressive prosecution of whistle-blowers under the Espionage Act and willingness to embroil journalists in “leak” investigations and prosecutions casts doubt on the legitimacy of the criminal justice system.

Unable to attend in person, Snowden sent an eloquent statement, which I read at the celebration dinner. Unfathomably, maintaining his sense of humor amid exile and ongoing threats, Snowden began his statement with a joke: “I apologize for being unable to attend in person, but I've been having a bit of passport trouble.” Snowden’s inspiring words were food for some of the world’s leading thinkers:

Today we stand at the crossroads of policy, where parliaments and presidents on every continent are grappling with how to bring meaningful oversight to the darkest corners of our national security bureaucracies. The stakes are high. James Madison warned that our freedoms are most likely to be abridged by gradual and silent encroachments by those in power.

Mirroring public opinion, Snowden’s statement was generally well received. But, in a stark demonstration of just how loud the U.S. government’s propaganda megaphone has become, several intelligent thought-makers clung to long since debunked memes about Snowden and his whistle-blowing. One attendee speculated about the nefarious reasons Snowden might have “chosen” to flee to Russia, when, in fact, the U.S. government stranded Snowden in Russia by revoking his passport when he was en route to Latin America. Another condemned Snowden for some unknown, theoretical future “harm” resulting from his disclosures. Despite expending considerable resources looking for it, the U.S. has found no such evidence. Yet another criticized him for not using “internal channels,” either ignorant or in denial of the fact that there are no effective internal channels for intelligence community whistle-blowers, and existent “channels” serve more to entrap than to protect them.

The fact that a third of the honorees in the Surveillance State category of leading global thinkers could not travel to the U.S. to attend a dinner celebrating free thinking is a tragic irony. The restriction on travel is another form of chilling First Amendment-protected activities of speech and association, and is an anti-democratic tactic that is the stuff of dictatorships, not democracies.

Even though Snowden does not seek or want recognition, as a whistle-blower advocate, I am heartened that Foreign Policy magazine recognized his unprecedented and courageous contribution to -- indeed, enabling of -- global thinking on surveillance. Snowden wrote in his statement: “I bet my life on the idea that together, in the light of day, we can find a better balance.” The noticeably absent honorees are testament to how far we still have to go.

Jesselyn Radack represents Edward Snowden and a dozen other individuals investigated or charged under the Espionage Act. She heads the Whistleblower & Source Protection Program (WHISPeR) at ExposeFacts.