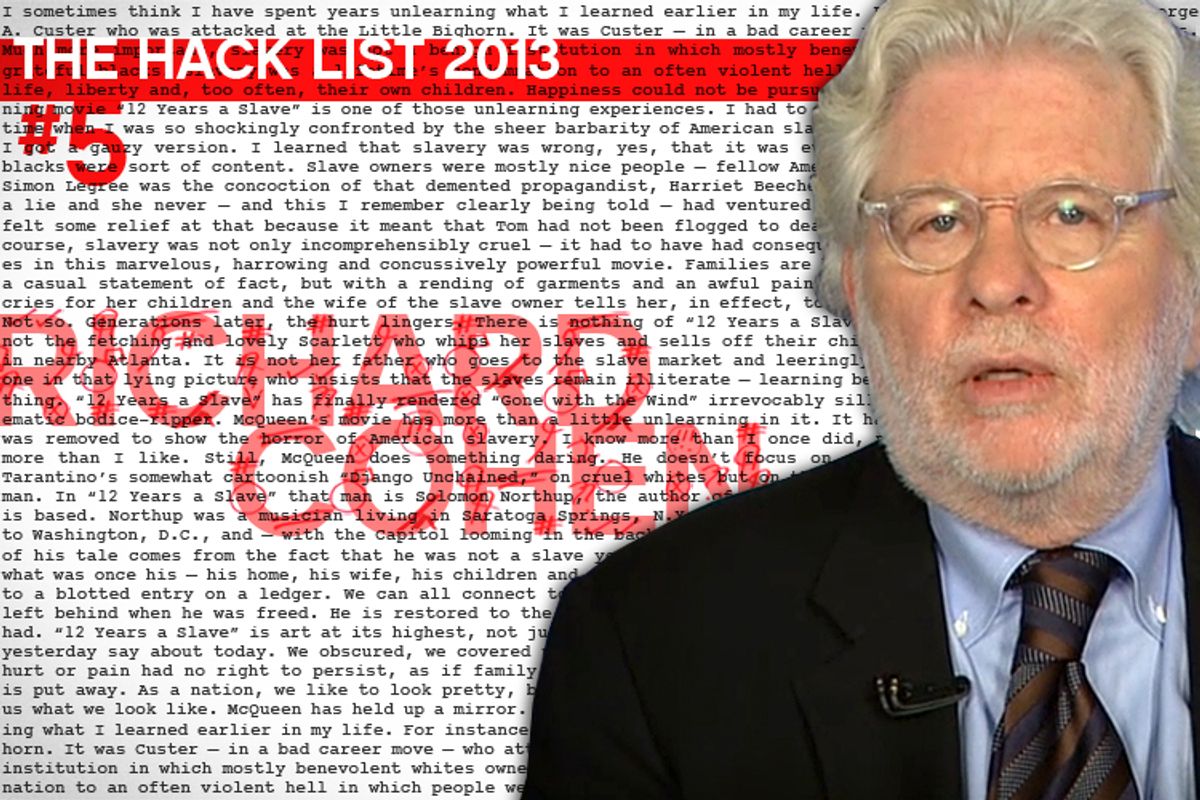 First of all, let me state my credentials: I am a funny guy. And I am not a racist. And I am a critic of Richard Cohen -- in fact I have called him "the worst writer in the world" -- in addition to being funny and not racist. As a funny, not-racist guy who is one of Richard Cohen's biggest critics, I think it's time to face facts. Richard Cohen is right about black people and young women.

I know my critics will have a field day with this. I can already practically see my inbox filling up with nasty missives from the unhinged left. I am sure that someone will call me a racist, since it's impossible these days to write honestly and frankly about the inherent scariness of young black men without getting called a racist. That's a real shame.

First of all, it hurts to be called a racist. It's deeply hurtful, and unfair. I myself have felt the ugly sting of being accused of racism on more occasions than I can count. And I know that if I weren't a reasonably well-off white man of a certain age with a prestigious job in journalism, I'd certainly never be victimized like this.

I think we have a real problem in our culture these days, when a man like Richard Cohen can't make the simple, reasonable argument that Trayvon Martin in some way bears responsibility for his own murder because of his choice of outfit without the ensuing response turning into a modern-day digital lynch mob. We all -- all of us -- know that, while we wish it weren't so, black people commit all of the crimes. To deny that is to deny reality. I'm afraid I can't deny reality. It's time to grow up, and admit that not letting black people go to stores is just a sadly necessary response to the real, and important, fears of white people.

Where is the politician brave enough to address the widespread fear of black violence? No major public figure ever talks about it, besides Richard Cohen. There is a political correctness omerta around the issue of black people committing crime and being frightening. I wish I had a solution to this problem. I thought Barack Obama would fix it, by making it permissible for Richard Cohen to admit to his racial anxieties without fear of any sort of backlash. But did the former Barry Obama make it OK for Richard Cohen to defend racial profiling? No. Is the solution to put into place a criminal justice system designed to detain and imprison as many people of color as possible? I don't know. Does such a system already exist? I don't know. If it does, is it racist? It's a painfully, achingly, staggeringly complex issue, but I think it is not.

It may seem that whenever I ponder a very difficult and complex issue, I, like Richard Cohen, invariably come down on the side that allows me to persist in my existing prejudices. Nothing could be further from the truth. I, like so many Americans, have spent many years with comfortable delusions, only to be shaken of them later in life, when reality, in the form of fiction, intervenes. Take the example of the Salem Witch Trials. Like all of us, I labored for years under the impression that they were just a bit of a prank that got out of hand. It wasn't until I saw the remarkable, beautiful film "ParaNorman" that I realized the terrible truth. Many of the tens of thousands of women publicly executed as witches throughout the 16th and 17th centuries, in Europe and the United States, weren't witches at all. Indeed, most of them weren't. Some of them were just little girls with the power to speak with friendly dead people. Many didn't even have that power.

Alas, not all art is as inspiring as "ParaNorman." I had the distinct misfortune of seeing a photograph of Miley Cyrus recently, and, like everyone else, I was appalled. I'm told she was recently found to be "twerking." Even though Richard Cohen included a definition of the word in his column, I also had to look up the word "twerk," and I had to write that I had to look it up in order to highlight my disdain for all things associated with youth. I also had to look up "WikiLeaks."

Richard Cohen got a lot of grief for arguing that Cyrus is responsible for rape, and for simultaneously arguing that some rape doesn't count as rape, because of Miley Cyrus, but we should be honest with ourselves. Look, I'm a liberal guy, and I love women. As a liberal, not-racist guy, who is funny and who loves women, it's time to admit it: Cohen is right.

Despite what Ta-Nehisi Coates says, the modern Richard Cohen is not sexist, but he is deeply troubled -- about "teen culture," about "sexual harassment" "victims," about the gradual marginalization of what used to be acceptable, like a bit of harmless flirting with someone in a professionally subordinate position. Or sex with a 13-year-old. And it's only natural that Cohen is troubled by all this. The world is changing so quickly, and it takes time -- sometimes more than 70 years -- to learn to treat women as humans and not sex objects with a responsibility to respond approvingly to advances from all men who wish to let it be known that they desire them. People with conventional views must repress a gag reflex when considering a James Bond who is sexually desirable because of his appearance and physique instead of merely by virtue of his power and class. To aging pigs like Cohen, this doesn't look like their country at all.

Now, about the time that Cohen was accused of harassment at the Washington Post office. I don't like what Cohen did. I hate that he created a hostile work environment and repeatedly behaved inappropriately toward a much younger editorial aide. But I can understand why Cohen felt entitled to treat her like garbage and why he thought she was wearing a uniform we all recognize -- that of a female with sex parts.

And all of that was so long ago. I think it's time for the media to forget Richard Cohen's supposed "sexual harassment." Let it go. We were not all so modern then, in 1998. Richard Cohen stands accused merely of being a man. A funny, not-racist, liberal, non-sexist man.