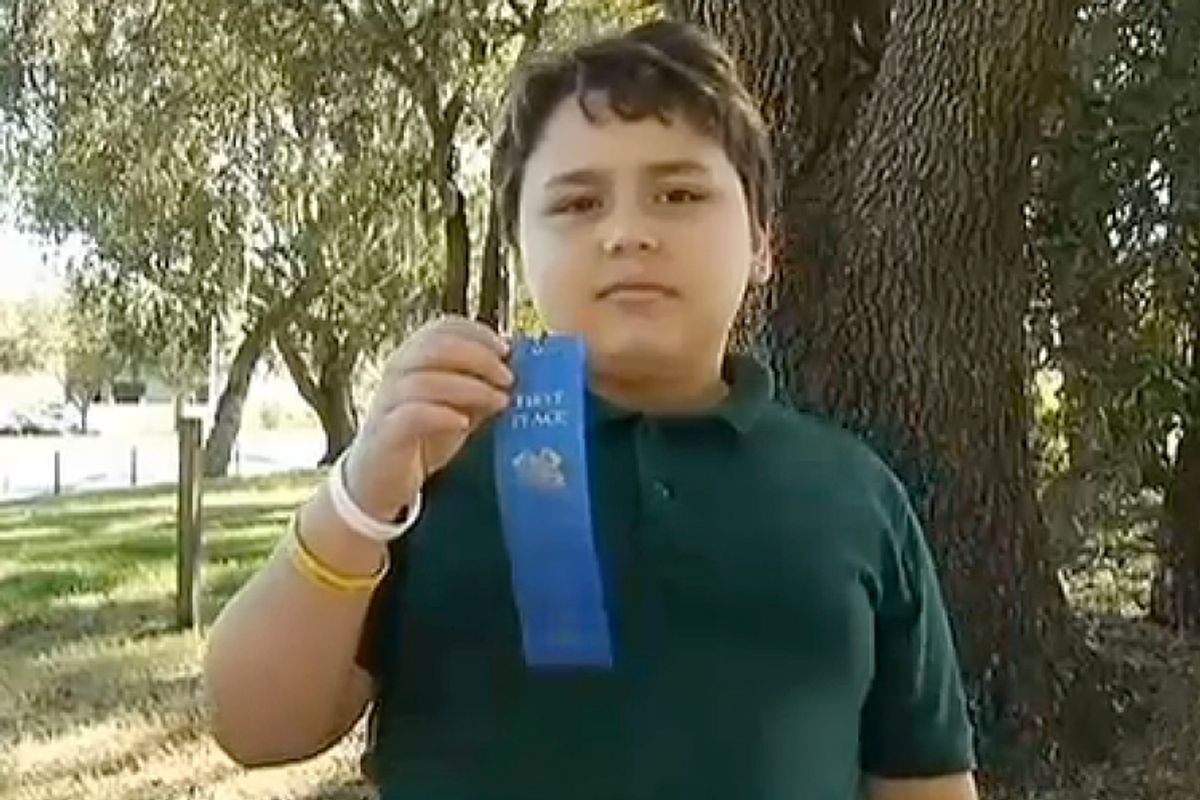 Zachary Golob-Drake is the kind of kid any school would be proud to have representing it. And last week, the Tampa, Fla., fifth-grader won a first place blue ribbon in a class contest for his speech about how to make the world "a better place." He was then set to deliver that speech to his entire fourth and fifth grade, and, if he did well, go on to represent his school at the regional 4-H Tropicana Public Speech contest. Instead, the boy says the school tried to strip him of his prize and block him from sharing his speech with the school.

Titled "In the Name of Religion," Golob-Drake's brief speech notes that "The world’s major religions all have messages about coexisting," but "Religious differences have always sparked conflict, even leading to warfare and mass murder." As examples, he cites the Crusades, the campaigns of Genghis Khan and the attacks on the United States of 9/11. He ends by stating, "Religion provides moral guidance for most of the seven billion people on the earth" and invoking the Golden Rule of "Do not do to others what you do not want them to do to you." Seems reasonable enough. The boy says that after he won the prize, "I was excited and happy to represent my school."

But then Golob-Drake says assistant principal Candice Dodd told him that "She thought my speech wasn't appropriate for fourth and fifth graders and she thought that probably I would have to rewrite my speech, take the religion out or not compete." When he said he wanted to think about it, "She said to me probably the fairest thing to do is to take your ribbon." Shocked at the sudden reversal, his mother and brother talked to the school, which then returned his ribbon and agreed to let him deliver the speech – if his classmates brought in permission slips from their parents. School District spokeswoman Tanya Arja says the problem wasn't that it was critical of religion, but that "The concern was over the topic of mass murders." And a WFLA report adds that the school asserted the topic was "a little too deep for fourth- and fifth-graders" – despite, apparently, the fact that it was written by a fifth-grader.

Discussing religion in public school is a tricky matter. There are seemingly endless battles over whether God should be pledged to in the classroom, whether Bibles should be handed out to students and whether students should use their valedictorian speeches to say the Lord's Prayer. How do we encourage kids to be questioning and critical about the world in which they live without imposing ideology on them, without turning a space that ought to be free of religion into one in which religion is discussed and debated?

These are, no doubt, serious challenges that require sensitivity from educators. That's why it's important to look at each case in context, and err on the side of critical thinking. Whatever its true reasoning for trying to take away Golob-Drake's prize, it's galling that a school would be so brazenly heavy-handed in its methods, and it's depressing that it didn't recognize that the boy's speech was accurate and evenhanded. It wasn't arguing for or against organized religion; it merely pointed out how it's been manipulated and used as a justification for evil acts. That's called looking at information and reaching logical conclusions. Kind of what education is supposed to instill.

The great mistake a lot of adults make is assuming that children are innately trusting and innocent. You know what they are? They're questioning and curious and skeptical and intensely philosophical. They want to make sense of the world and reasons people do the things they do. They have amazing ideas, ideas that are too often wrung out of them by a school culture increasingly devoted to filling in little circles and insisting there's only one correct answer to any problem that comes along, and only one way of arriving at that. Children have doubts, and the best teachers encourage them in those doubts, guiding them to explore more deeply the complexities and ambiguities of their lessons, instead of seeing the world in strictly black and white terms. There is no denying that history is chock-full of terrible things that have been done "In the Name of Religion." Zachary Golob-Drake knows it. Any well-educated fifth-grader should. And if they don't, they should be given the chance to hear it. On Monday, Golob-Drake finally got his delayed chance to deliver his winning essay -- and was chosen to go on to represent his school at the 4-H Tropicana Public Speech regional competition.