How to fight sexism in the toy aisle 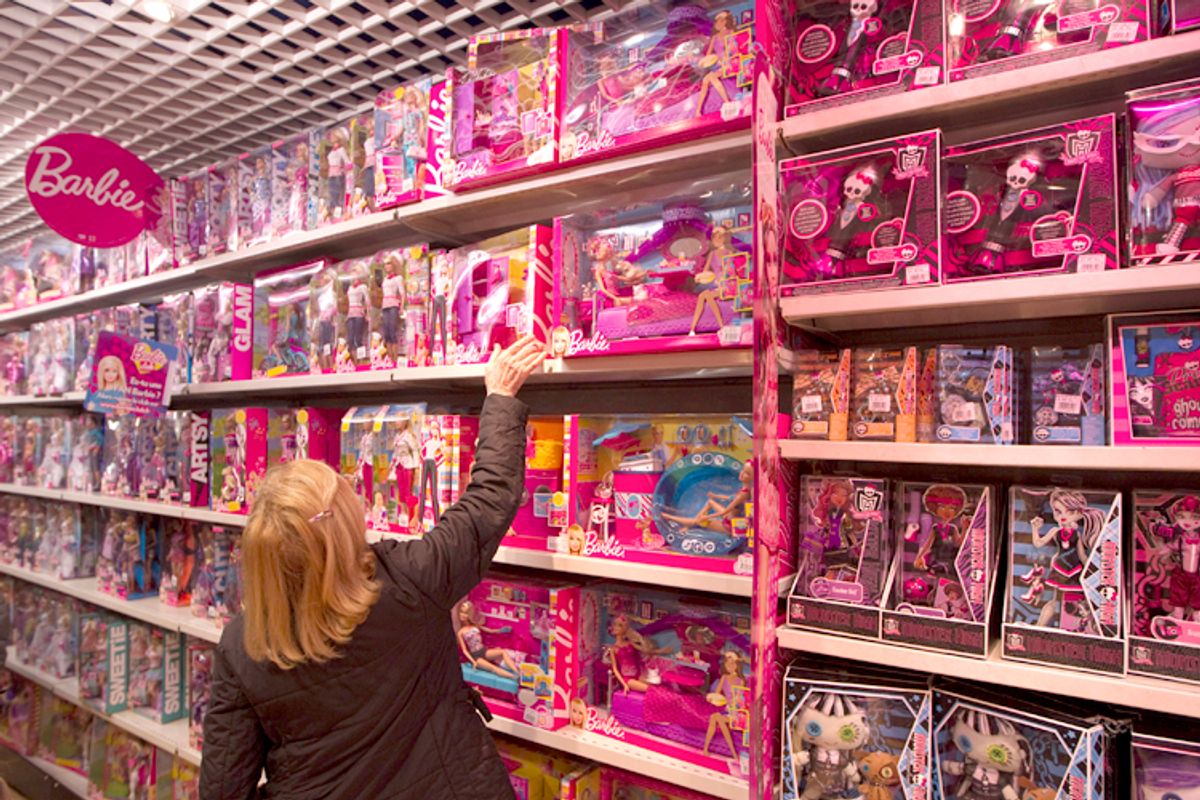 If you've been in the toy aisles recently – and if you have children in your life, odds are good you have – you are well-acquainted with the ludicrous cultural shift between the zones for boys and those for girls. Boy world is colorful and full of action. Girl world is pink and full of tiaras. But take heart, traditional sex role subverting families -- 2014 might be the year that finally changes for good. The British retail chain Marks & Spencer has announced that in the new year, it will do away with gender distinctions for its toys.

The move has come in response to customer complaints about the retailer's "Boys' Stuff" featuring "planes, cars, dinosaurs and racing cars" and its "Girls' Stuff" with "dolls and accessories." M&S now says, "We offer a wide range of fun and educational toys, which are designed to appeal to children regardless of gender. We have listened carefully to feedback from our customers and by spring next year all of our toys will be gender neutral."

Even more encouragingly, other chains are also doing the same. In just the past year in the U.K., "the number of shops organizing their toy departments into separate sections for boys and girls has fallen by 60%." It's the result of similar consumer outspokenness. This past spring, the drugstore chain Boots came under fire for putting its science kits in the "Boy" section and leaving the "Girl Toy" area for tea sets and princess dress-up. In response, it declared, "It was never our intention to stereotype certain toys. It’s clear we have got this signage wrong." Two years ago, Hamleys stores eliminated pink and blue for a consistent red look for its toy area. And when you search for "girl" toys on its Web page now, you're as likely to get a dump truck as a ballerina doll.

Moving toward a less strictly defined toy aisle won't magically change a culture in which boys and girls are told from birth to aspire to very different dreams, but they will open a door for less restrictive roles for all children. Earlier this month, the start-up toy company GoldieBlox earned a brief moment of public goodwill (before they messed with the Beastie Boys) for creating toys meant to get girls interested in science and engineering. But if you take a gander at the GoldieBlox Spinning Machine, it's full of pastel hues and cuddly animals. So while it's nice that somebody's suggesting girls can play games that aren't about shopping or being a princess, it still falls squarely into the "shrink it and pink it" ethos of branding for females. Hint: Science for girls is called science.

Moving away from that segregated model is both simple and deeply meaningful, and not just because it offers girls a better chance of viewing themselves as something other than tiny shopaholic divas – or at best sherbet-hued science Barbies. It matters because it liberates boys from having to be territorial about "their" toys too. Imagine a world in which kids grow up with at least the possibility that play can be whatever you want it to be. Imagine parents seeing that too, instead of avoiding certain toys simply because they aren't there in the aisle belonging to the child they shop for. These things happen because consumers speak up and say they want more for their kids. Bit by bit, together, we can build a world in which an oven can be an appliance and not a statement of gender, and Legos can be Legos again. Just Legos.  Everybody wins. It's going to be a great year to be a kid.