Will Ferrell and pals hit the Big Apple and invent cable news, in a chaotic, idiotic, sometimes hilarious sequel 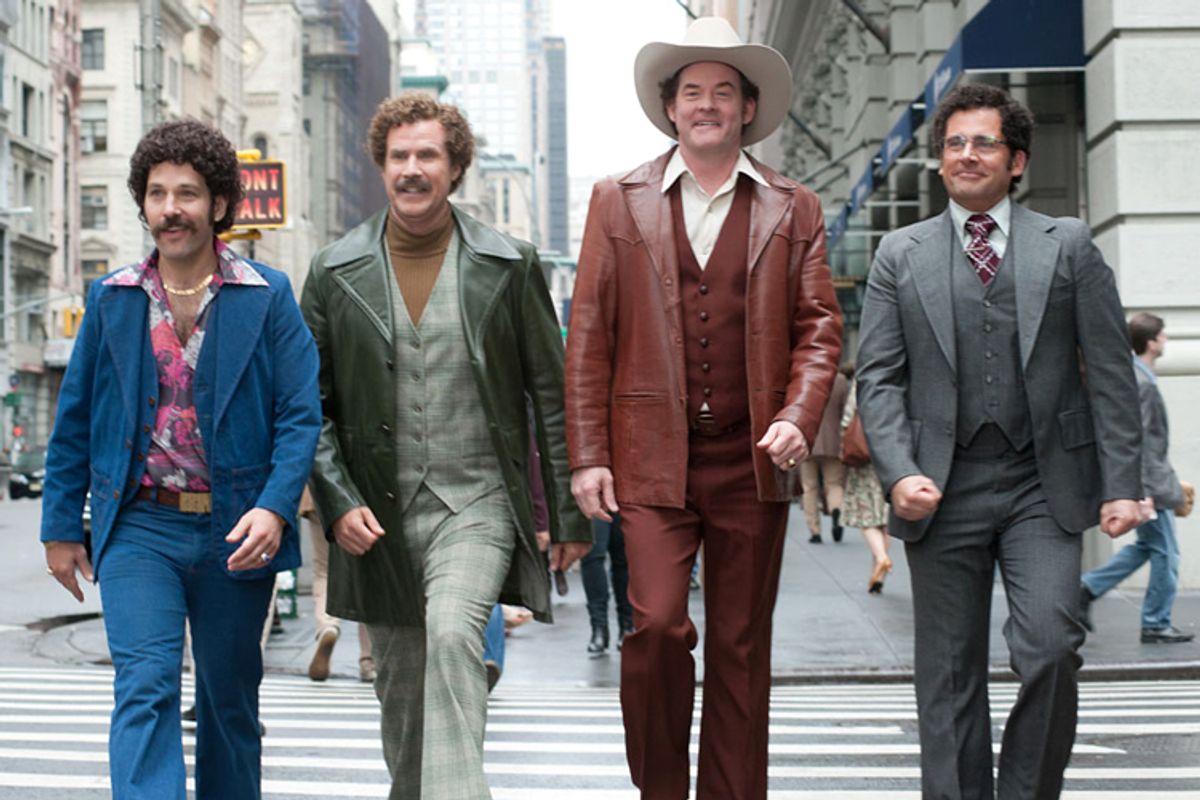 “Anchorman 2” is the inordinately self-aware sequel to a beloved Hollywood movie that has shaped the character of improv, stand-up, TV and film comedy over the last decade. In other words, it’s pretty much critic-proof, which raises the question of why I’m writing this review (and why you’re reading it). I really don’t know! This is the kind of movie where most people know what they want and are pretty sure what they will get, that being “more of the same, please.” I do not delude myself that anyone’s ticket-buying decision is likely to be guided by my snotty attitude, nor by my admission that I occasionally snorted, guffawed and giggled during “Anchorman 2,” especially at its dumbest and most random gags.

Indeed, Paramount Pictures sent the movie-pondering set a pretty clear signal that we needn’t bother: They didn’t screen the movie for critics until Monday evening, barely 36 hours before it opened in theaters, and requested a review embargo until Wednesday. (Review embargoes are weird, and like almost everyone else in the business I feel mildly troubled by them. They are “gentleman’s agreements” with no legal force, to be sure. But most of the time we observe them, because it’s not worth pissing off a studio in search of some minor news-cycle advantage on a movie review.) I skipped that screening to go to a Christmas party, then had a bit of a rethink about it and wound up seeing the movie in a regular Manhattan theater on Wednesday morning, along with a dozen or so other paying patrons. That was where I found out that being self-knowing and critic-proof — and taking an excessively literal approach to “jumping the shark” — does not actually insulate a movie from its own badness.

When I tell you that Will Ferrell’s moronic but lovable Ron Burgundy, formerly the anchor of mid-1970s San Diego’s second-worst evening newscast, jumps the shark in “Anchorman 2,” I am not hauling out an overused cliché and seeking to imbue it with ironic meaning. The movie does that all by itself. Virtually the first thing we see in “Anchorman 2” is Ron, wearing his suit and tie in the ocean, trying to escape from a man-eating great white, a scene we will return to, art-cinema style, later in the film. One could even say that the shark plays a key role in the plot if “plot” were not a ludicrous concept here. “Anchorman 2” isn’t trying to be a regular movie that tells a story, or at least it isn’t trying to do that most of the time, but it also can’t fully escape from Hollywood conventions into free-form, “Kentucky Fried Movie” or Monty Python sketch-comedy lunacy. One of my biggest problems with this movie, in fact, is that Ron Burgundy and his pals are required to learn and grow as people, when almost the entire point, comedy-wise, is that they don’t learn anything, cannot grow and are not like real people.

There’s also the nearly ubiquitous sequel problem, which is that you have to make everything bigger, and bigger is not necessarily better (and is almost never funnier). The original 2004 “Anchorman” was set amid the evening-news wars of San Diego — or, as Burgundy mysteriously pronounces it, “San Di-ah-go” — in the 1970s, which is an inherently funny premise. “Anchorman 2” is set in New York in the dawn of the cable-news era, around 1980, which is something else entirely. If anything, that premise borders on the substantive, the meaningful and the dramatic, which heaps all kinds of responsibility on this movie it really doesn’t want. I suppose it’s sort of amusing or trenchant or something that Ron and his gaggle of supporting idiots accidentally invent the cable-news paradigm: “Breaking news” alerts for meaningless crime stories, cute-animal videos, weather hysteria and empty patriotism. It’s sort of nice to know, in the abstract, that Ferrell and his director and co-writer, Adam McKay, mean well and are not right-wing creeps. But are we really looking for liberal messaging about the O.J. chase and the erosion of news standards from freakin’ Ron Burgundy? I think not, amigos.

“Anchorman 2” plays a bit like the discount-store version of David O. Russell’s “American Hustle,” with Ron and his cohort — ladykilling investigative reporter Brian Fantana (Paul Rudd), dimwit weatherdude Brick Tamland (Steve Carell) and ultra-closeted proto-Tea Party sports guy Champ Kind (David Koechner) — strutting the Manhattan streets in similarly outrageous outfits. None of those guys gets much to do, though Brick’s nearly nonverbal romance with a dysfunctional secretary played by Kristen Wiig is very close to being worth the price of admission. Ron’s wife and sometime rival, Veronica Corningstone (Christina Applegate), is largely kept offstage in this installment so Ron can have an ill-fitting interracial romance with his boss, a fire-eating network exec named Linda, played by Meagan Good.

I admire Ferrell’s instinct to push comedy into uncomfortable places, or at least I admire it in theory, but this whole aspect of the movie doesn’t work at all. There’s an already infamous scene in which Ron scandalizes Linda’s middle-class African-American family by attempting to “talk black.” I recognize that the supposed point is to poke fun at Ron’s racial discomfort, but the net effect is just all-around discomfort that yanks us out of the movie: Ron seems like a racist turd, Linda seems shallow for going out with him, the actors have to labor through a painfully unfunny scene, and Ferrell and McKay apparently never grasped that the whole thing was embarrassing and should be scrapped.

But here’s the good side of “Anchorman 2,” which is that nothing sticks around too long. No sooner have Ron and his buddies reunited their news team, moved to the Big Apple and invented cable news than we’re off on a melodramatic tangent involving blindness, and apparently stolen from a Douglas Sirk movie. Veronica is now with a ponytailed shrink with psychic powers (nice role for Greg Kinnear), and Ron must repeatedly do battle with hotshot young anchor Greg Lime, whose blinding white teeth and studio tan are inhabited by James Marsden. Oh, and then there’s the science-fiction battle royal toward the end, involving cameos by everyone in the damn world, including Jim Carrey, Sacha Baron Cohen, Kanye West, Tina Fey and Amy Poehler, John C. Reilly as the soul-sucking ghost of Stonewall Jackson and many more. Oh, and then there’s the damn shark, reminding us that these people know they’re making a movie that’s dumb as hell and are kind of rubbing our faces in it.