Beyoncé: Smart, savvy -- but not innovative

Savvy musicians like Beyoncé and David Bowie have adapted to the Web. That's not innovative -- just good business 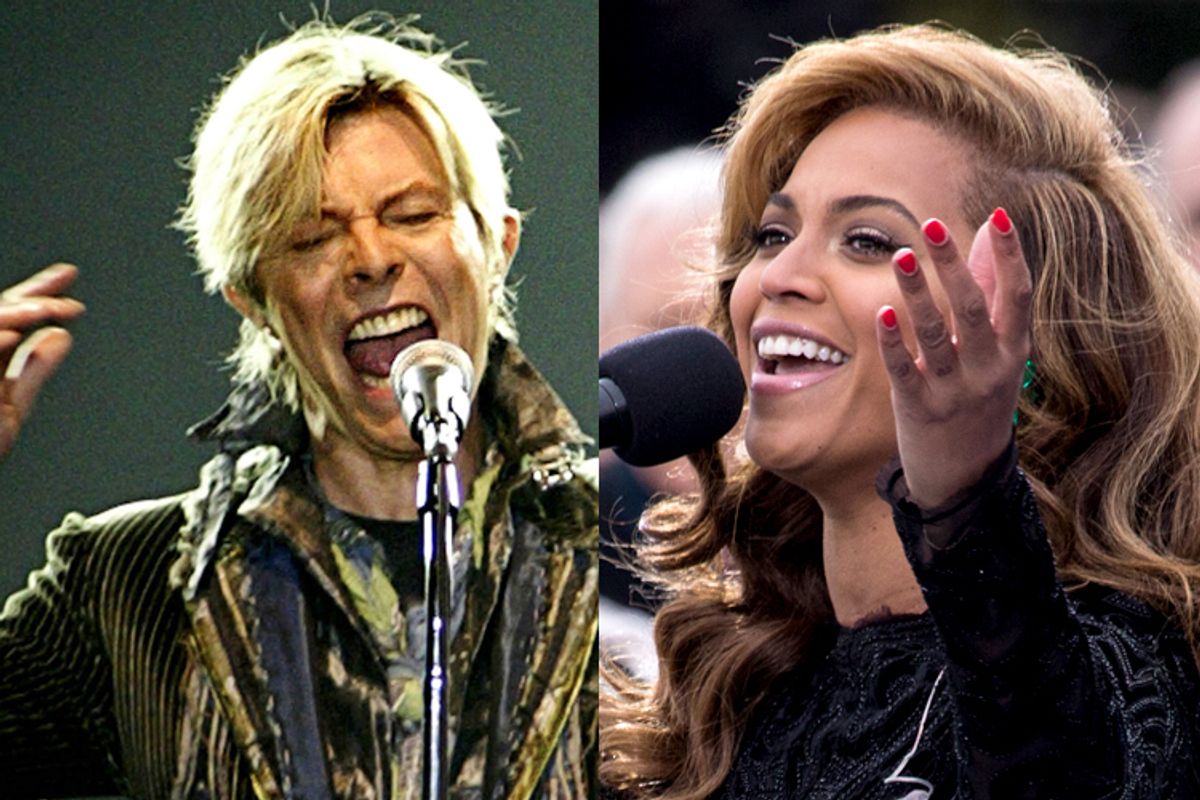 Over at the Washington Post, Dominic Basulto weighs in on the new album from Beyoncé. He argues that somehow the album’s release “distorts our notion of true innovation.” This would be all well and good if the 890,000 people who bought the album in the first three days or so were actually expecting innovation. They weren’t. They just wanted new music from one of their favorite pop stars.

Of course, if you are an Innovations blogger for the WaPo you might see everything through the lens of innovation; i.e., there’s innovation on every corner. I doubt that Bey, Blue and Z were even looking through that lens.

Given the media frenzy surrounding the album’s release there have certainly been distortions, just not the kind that Basulto brings up. As interesting as his piece may be to tech nerds, I think he goes too deep in his appraisal of what took place.

Earlier this year David Bowie released a new album out of the blue too. Also including films and streamed in its entirety on iTunes.

Beyoncé deserves to be credited with simplifying the album release and distribution model. "Innovation" is not a word that covers it. Innovation is often expensive and messy and can end in failure. Bowie and Beyoncé managed to remain in control of their artistic endeavors, and while the enterprise in both cases was surely expensive, failure was not an option.

Let’s look at what Beyoncé and Bowie actually achieved with their  album releases.

1.   Secrecy. In a gossipy world with an always-on social web waiting for every slip of the __________ (insert social platform faux pas here) this must have been hard. Or not. Why would B&B reveal their secret to anyone other than their inner circles?

2.   Simplicity. Apple’s Jony Ive has said: "Simplicity is not the absence of clutter, that's a consequence of simplicity. Simplicity is somehow essentially describing the purpose and place of an object and product. The absence of clutter is just a clutter-free product. That's not simple.” The Beyoncé and Bowie albums were delivered with an eye on purpose and place: via iTunes and social media. Innovation? No. Effective? Yes. Happy fans? Yes.

Both artists understand where their audiences are active. They understand the competition too; how does Madonna, Miley Cyrus or Lady Gaga follow Beyoncé’s lead? For that matter even Jay Z will have to dream up something far more spectacular than giving away his album via smartphones.

Beyoncé clearly took note of the rise of the 17-year-old Lorde too -- you can hear her influence in a couple of the album’s tracks. I’m not surprised that Taylor Swift is cozying up to Lorde, seen here with David Bowie and Tilda Swinton, as she is another contender for the "surprise" stakes. Taylor might get some tips.

Bowie shows us that rock can still be smart and engaging and that his famous chameleon maneuvers are still intact. In his short films for the album "The Next Day," we see him shape-shifting in roles while creating Tilda Swinton in his own image as a doppelgänger. Bowie’s entire career has been innovative. If you don’t agree with me try answering this question: Who is David Bowie?

The innovation that Mr. Basulto would like to see today took place almost two decades ago when musicians and record labels were blindsided by Napster. Like most new technological inventions, Napster and the Web scared them; so much so that they ended up suing their own customers. What they found was that they could shut down a Web company but not the Internet.

Over the years, smart musicians and record labels have successfully adapted to the new platforms that we all use these days.

In the case of the Beyoncé album release, I would argue that our notion of innovation wasn’t distorted at all unless one was desperately looking for further innovation in the music space.

"Innovation" is a word that has spilled out of technology circles into common use. It is an overused word and should be handled with care. You can see the results of that overuse when investors punish Apple’s stock price because the company is perceived as not being “more innovative,” as if that’s even possible. Another overused word is "disruption." Please don’t use it unless you understand its real meaning.

The new distribution platforms and social media work very well for musicians who care to use them.

Dave Allen is the Interactive Strategy Director for NORTH, a brand agency in Portland, Oregon and an Adjunct Lecturer at the University of Oregon specializing in Digital Strategy. He is also a founding member of the UK post-punk band, Gang of Four.