Rep. Jack Kingston has a bold new lesson for poor children: If you want lunch, you better work for it. Literally 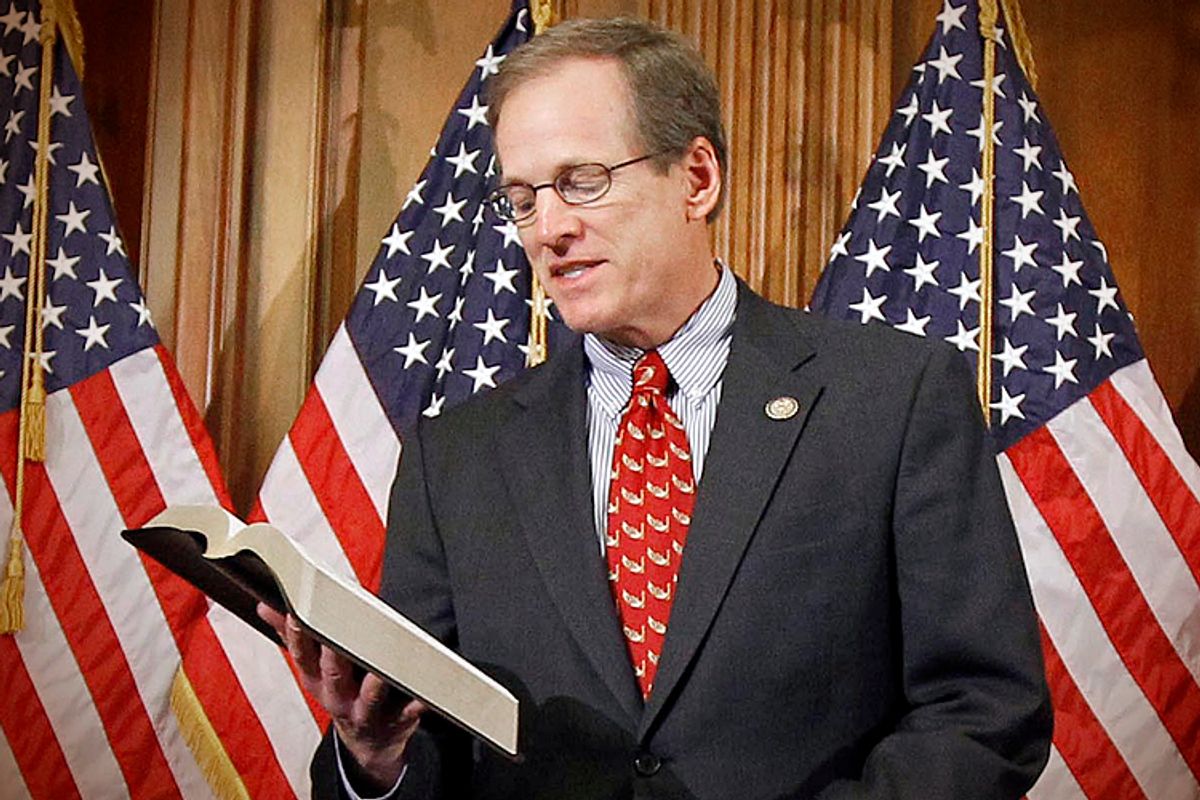 Rep. Jack Kingston seems to be the least crazy of the various House Republicans running to replace retiring Sen. Saxby Chambliss in Georgia. Why? Ha, I don't really know; he got into some sort of fight with Real Conservatives recently for suggesting it wouldn't be "responsible" to "let Obamacare fall to pieces on its own." Sometimes he goes on annoying liberal TV shows. Mostly, he's not Rep. Paul Broun, who is nuts.

Anyway, not-Paul-Broun had a really awful idea the other day! It involves poor children and lunch. Children from families below 130 percent of the federal poverty line can receive free school lunches, children from families between 130 percent and 185 percent of the FPL get reduced prices. This disturbs Jack Kingston, and he believes something must be done.

But on Saturday, Kingston came out against free lunches, saying that children should have to pay at least a nominal amount or do some work like sweeping cafeteria floors.

"But one of the things I’ve talked to the secretary of agriculture about: Why don’t you have the kids pay a dime, pay a nickel to instill in them that there is, in fact, no such thing as a free lunch? Or maybe sweep the floor of the cafeteria -- and yes, I understand that that would be an administrative problem, and I understand that it would probably lose you money. But think what we would gain as a society in getting people -- getting the myth out of their head that there is such a thing as a free lunch," he said.

We're not sure what he means about an "administrative problem" and "it would probably lose you money." Maybe he and Newt Gingrich can flesh these out in a more developed white paper outlining all of the untapped growth potential in the poor children's labor force.

A few problems with this do instantly come to mind, though.

One: Forcing the children from poor families to stick around the cafeteria to sweep up while their better-off friends hitch off to recess would be unnecessarily traumatic to the kid's psyche, especially as the other kids would make fun of that kid for being so poor. Have you ever seen what children are like? God, they're awful. The well-off ones would dump their whole lunch trays on the floor and say to the poor kid, "Hey, Rags, clean 'er up, because ha ha ha, your parents have a low income." Not only would you be scarring poor kids for life; you'd also give a whole new generation of non-poor kids ample practice time to develop into assholes.

Then there is the other thing that Jack Kingston maybe ... doesn't get: No kids have money? Is the other thing? No kids pay for their school lunches. They are all getting "free lunches" because they are kids and do not have money. Their parents give them money to buy lunch. It is not like 7-year-old Tommy comes into school flush with cash after working the overnight shift on drywalling the new waterfront development, while 7-year-old Timmy, who could have been working but didn't, is mooching off Tommy's Hard Work. Seven-year-old Tommy comes into school flush with cash because his parents, who can afford to, gave him some money with which to purchase lunch; Timmy's parents are in poverty and so could not give him any money. Every kid gets a "free lunch." So it doesn't make sense to put one into janitorial labor and not the other because of parental earning disparities.

Here's an idea in the different direction: Have schools provide kids from all families with free lunches, and put everyone in the same boat. There goes your controversy. If people like Kingston disagree with that, though, then the other option should be to stop complaining about the current system because, Jesus Christ, man, why?