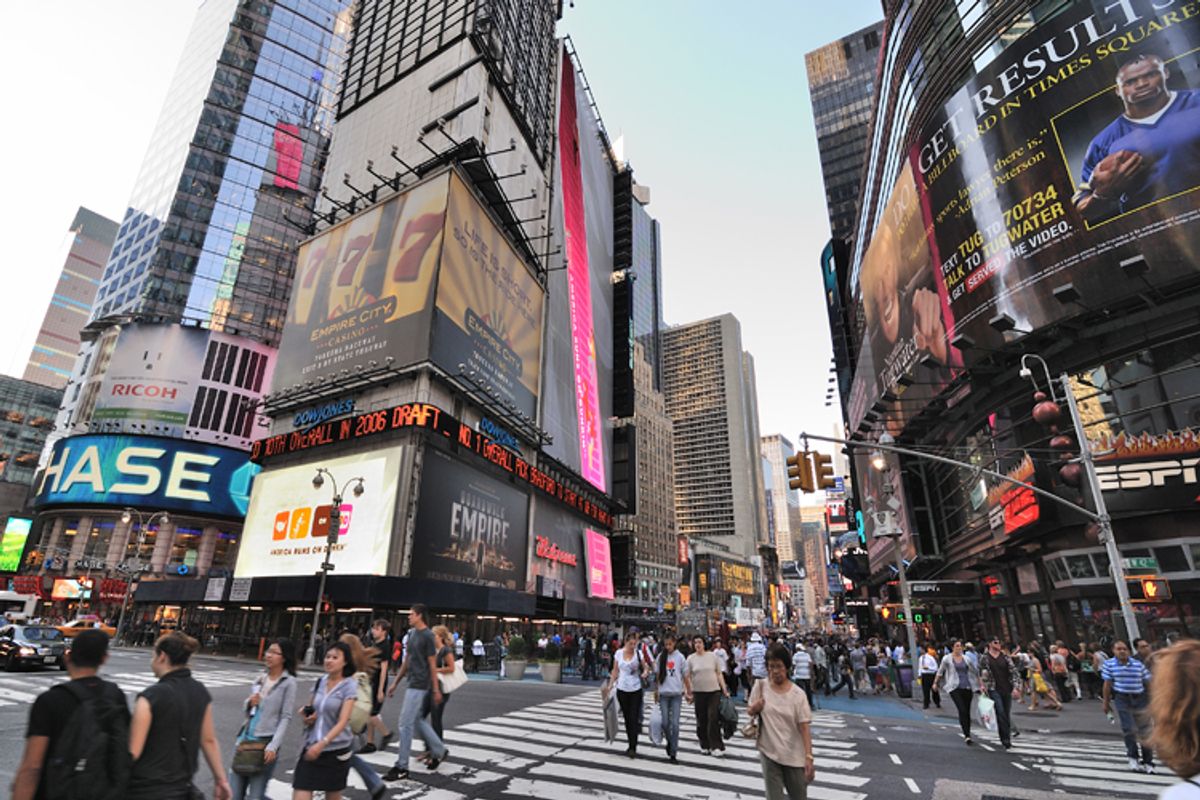 For the past two decades, urban planners and architects in Vienna have been considering how women and men use the city. An article in the Atlantic earlier this year explained that, when asked about their daily lives in a planning survey, “The majority of men reported using either a car or public transit twice a day -- to go to work in the morning and come home at night. Women, on the other hand, used the city’s network of sidewalks, bus routes, subway lines and streetcars more frequently and for a myriad reasons."  "The women had a much more varied pattern of movement," city administrator Ursula Bauer told the Atlantic. "They were writing things like, 'I take my kids to the doctor some mornings, then bring them to school before I go to work. Later, I help my mother buy groceries and bring my kids home on the metro.'"

As a result, Vienna is a friendlier city for women and easier and safer for them to navigate.  Their use of the city isn’t biologically mandated, but squarely pegged to gender roles and their effects, like women’s desire for better lighting to improve their safety. It’s also useful to men who are now more involved in daily childcare.

What Vienna did is known as gender mainstreaming. It’s a strategy for creating more equitable societies that fairly allocate resources by considering a diversity of needs. Vienna’s urban planning initiative is a good illustration of how gender mainstreaming not only considers how certain goals impact everyone, but how goals actually change when you give everyone consideration.

The approach, however, is still not typical. Not even in seemingly simple and intuitive ways.  For example, until relatively recently, using only male body crash test dummies resulted in the deaths of many more women in car accidents.  Having “unisex” military uniforms built for men endangered female soldiers.  Thinking of female bodies as exceptional, basically as a preexisting condition, meant our insurance and healthcare solutions failed us disproportionately. There is no shortage of examples where focusing on the male body alone creates problems or makes existing ones worse.

Consider, for example, what happens in the wake of war or natural disaster. International aid efforts are designed to ensure security and help governments return their countries to some semblance of normalcy. After a disaster we know that everyone affected suffers. We read news stories that talk about water shortages, lack of medical care, food crises and more.  However, according to “In Double Jeopardy: Adolescent Girls and Disasters,” a study released in October by the aid organization Plan International, girls and women are at significantly higher risk for dying and violence after natural disaster. How much more? In disasters, girls and woman are 14 times more likely to die than boys and men.  And they're more vulnerable to a whole host of other ills as well.

The report cites the findings of a 2007 study conducted by researchers at the London School of Economics, "The Gendered Nature of Natural Disasters," which describes the impact of male preference on survival.  This thinking also affects the distribution of valuable relief resources, like food and medicine. Girls are less likely to be fed or to get critical medical health in the wake of disasters. In the Philippines right now, 1,000 women are giving birth a day with almost no medical care as a result of their disastrous typhoon having destroyed virtually every care facility.  Medical teams who have gone to the area are not necessarily prepared or equipped to deal with critical obstetrics and gynecology issues.  The U.N. estimates that as a result of last month’s record-breaking Pacific typhoon, 65,000 Filipino girls and women are at significantly heightened risk for what were already high rates of rape and sexual assault.  After wars and natural disasters, young adolescent girls are particularly vulnerable to sexual predators. A No. 1 reason cited by Syrian refugees for fleeing their country is fear of sexual violence.  Media and governments both minimize what these realities mean in planning courses of action.

In addition, social ideas about gender, purity and honor – so crucial to patriarchal organization - also have a dangerous effect. Aid workers in Pakistan report that girls and women made up 85 percent of those displaced by the tsunami. The LSE study cited above explained the ways in which aid is affected because for women it can be shameful to ask for help from unrelated men.  This exacerbated already extreme harms and magnified suffering tremendously.

Lastly, as things improve and communities attempt to achieve a sense of normalcy by sending children to school after disaster and displacement, girls continue to pay a high price.  Boys are often sent back to school first, either because educating girls is seen as unnecessary, or because they are needed to provide labor and childcare, or because the threat of rape and assault are considered too high. This is happening in Syrian refugee camps. Instead of going to school, many Syrian girls are being forced into early marriage – where they face sexual and domestic violence and a high likelihood of pregnancy and maternity-related illness and death.

Failing to make gender analysis a part of problem-solving is how we end up with benighted State Department officials who think of “women’s issues” as peripheral and, when asked about women in Afghanistan, say things such as “There's no way we can be successful if we maintain every special interest and pet project,” instead of understanding, as Professor Valerie Hudson and others have spent decades documenting, that state security, and international peace, are intimately bound with the status of women.

Which brings us closer to home.  Two weeks ago, the immigration reform organization We Belong Together: Women for Common Sense Immigration Reform, hosted a panel on the status of reform.  The purpose of the panel, which included the organization's co-chair Pramila Jayapal, Gloria Steinem, Sen. Mazie Hirono, D-Hawaii, and a host of other activists and policymakers, was to share information about why gender matters and to correct distorted media portrayals of what immigrants and immigration looks like.

Women and their children make up more than 50 percent of undocumented immigrants and fully 75 percent of those hoping to emigrate to the United States. While they make up the bulk of immigrants, only 27 percent of U.S. work visas are granted to women, nearly 60 percent of whom are involved in domestic and care work. Demand for this work is predicted to grow by 48 percent during the next 10 years.

If you’d listened to congressional debates a few months ago, or read everyday news coverage, none of these facts were taken into account by lawmakers.  The reforms favored highly educated, temporary foreign workers, who are disproportionately likely to be single men.  Not only do female immigrants have fewer educational and employment opportunities both in their home countries and in the U.S., but they face a whole host of dangers and issues that men do not. For example, up to 70 percent of women crossing the border illegally and alone are abused by “border rapists.” Female immigrants are far more likely to be accompanied by children, forced into sex trafficking, experience domestic violence and struggle with debilitating poverty – all of which affect U.S. domestic policy.  Sen. Mazie Hirono formed a coalition, mainly of bipartisan women in Congress, to address the intrinsic bias in the proposed law. There have been important improvements since, but reform is stalled.

Now consider how we talk about our ever-widening wealth gap.  Here, too, the media, far more often than not, slaps “unisex” on everything and calls it a day. Mainstream media assessments rarely, if ever, mention defining gendered dynamics as crucial to finding solutions.  It’s impossible to understand the wealth gap without looking at systemic biases along multiple dimensions like gender and race.

Several years ago, in her book "Shortchanged," professor Mariko Chang made the compelling case that closing racial wealth gaps is contingent on closing gender wealth gaps, and that closing the gender gap is essential to closing the overall gap. Women, for a whole host of reasons, are “wealth poor.” Chang demonstrated that every measured racial category, single women accrue only a fraction of the wealth that men do in the same categories. For every dollar in wealth that African-American and Hispanic men have, their female counterparts own one penny.  Even if the pay gaps were closed, as Chang explains, women would not be able to accumulate wealth in the same measure as their male peers because of gendered expectations.

Looking at problems this way is important. Instead, this CNN piece about race and poverty is typical. It includes a lot of information about differences in home ownership and why it matters, but nothing about wealth, women and mortgage discrimination. According to a study conducted in Chicago and released earlier this year, women are 24 percent less likely to get approved for mortgages. When black women list their names first on mortgage loan application they are "34 % less likely to be approved than if their applications first list a black man.”  When the application was for refinancing, that number went up to 44 percent.

Internationally, the U.S. is formally committed to gender equality, making sure, for example, that women are included in peace process considerations in foreign conflict resolutions. We have a National Action Plan on Women, Peace and Security to assist in those efforts.  However, our just released National Action Plan 2.0 has no domestic initiatives tied to similar ideas.  This may help explain why our country continues to lag in measures of gender equity.  On an informal basis, U.S. government entities sometimes take on gender audits of their own accord. However, unlike many other countries, we have no department or division whose purpose is to understand gender inequality in the law and distribute resources more fairly so that everyone’s needs are met.  The EU, by comparison, has a detailed gender mainstreaming toolkit that all member states employ.  Anything that remotely hints at gender considerations in the U.S., such as the Violence Against Women Act or Title IX, remains mired in controversies that persistently demonstrate a willingness to portray the dismantling of entitlements and the loss of sex-based privileges with oppression. Today, the issue with both the VAWA and Title IX is that people are demanding not just the formal recognition of equal access and protection under the law, but the normative expression of both in daily life.

Gender mainstreaming does have a downside. As Angela McRobbie points out in her book, "The Aftermath of Feminism," despite grass-roots implementations, the practice is “increasingly interpreted as a neo-liberal reorganization strategy.” Additionally, it can be used to perpetuate gender essentialist dichotomies that are, in the end, causing many of the problems it seeks to address.  Lastly, particularly from a North/South global perspective, the implementation of gender mainstreaming can replicate the worst aspects of colonialism.

As it is, however, here in the U.S., we are still often stuck with a “let’s get input from some women’s groups” mind-set that does nothing to alter the fundamental framework that women’s lives and needs are shoehorned into. It’s only when women get angry and outraged, either with public policy or in the private sector, that policymakers are forced to confront bias.

Last Thursday morning, Twitter quietly announced a change to the way people could block abusive users.  Before the day was done, avoiding a potential P.R. nightmare, they’d reverted to their earlier policy. The company appeared to not take into account the response of users who felt that the change enabled harassers, stalkers and cyber bullies and made the platform an unsafe space. These users were primarily vocal women, who make up 75 percent of those targeted online and are 25 times more likely to be harassed with malice than men are.  Understanding needs from a gender inclusive perspective hurts no one -- and it has the potential to help so many.