Because some people can't stand to have their privilege challenged, even a little 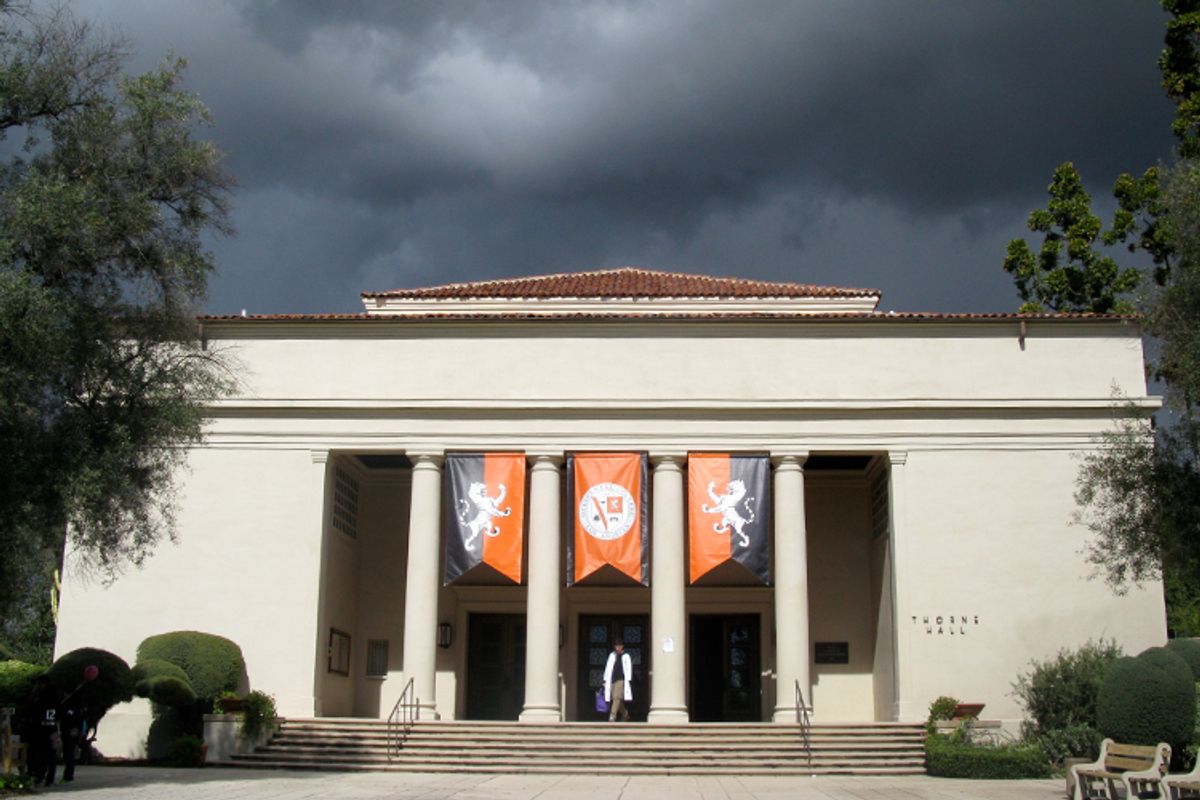 I thought I failed fourth grade.  It’s funny now that I’m a tenured professor at an elite college, but it wasn’t funny then.  I lived a 45 minute walk from school and I ran home that day, tears in my eyes, clutching my unopened report card in my fist.  I don’t remember much from my childhood, but I remember sitting on my front stoop and opening that horrible envelope.  All Es for “excellent.”  Huh.

Looking back I realize that my sense that I’d failed was based on how my teacher treated me.  She was the first adult who didn't talk to me in a baby voice like I was the most specialest little girl in the whole world.  She treated me like a small adult instead of kissing my ass.  But it was terrifying because my ass had been kissed by everyone around me my whole life and when I was demoted to "regular person" without any special privileges, it felt terrible and unfair.  I was being persecuted.

The institution at which I teach, Occidental College, is among an already large and rapidly growing number of schools that are being investigated by the Office for Civil Rights for how they’re handling sexual assault reports. These investigations are happening now because women are getting organized.  A new group called Know Your IX is mobilizing college women around the country, informing them of their rights, and helping them file complaints.

They are doing so because colleges across America are risky places for women and long have been.  One in six women in the U.S. will be the victim of a completed or attempted assault, but among women who go to college, the number is one in five.  Students have had enough and they’re fighting back.  They are, essentially, insisting that we no longer make excuses for and dismiss men’s violence against women on college campuses.  In other words, men are getting demoted to “regular person” without any special privileges.

It must feel terrible and unfair.

It must.  Because since Monday over 400 fake reports have flooded the anonymous reporting form on Occidental's website that allows victims of sexual assault to keep the college informed about crime on and around campus.  Anonymous reporting is important for basic crime tracking and also because survivors are often reluctant to come forward for fear of retaliation from their attacker, his or her friends, or the institution itself.  Importantly, an anonymous report alone, even if it names the attacker, carries no consequences for a rapist.  The form is being targeted by a group of men who got together on Reddit and 4chan, shared their anger over women’s right to report anonymously, and decided to spam it with fake reports and make it unusable, at least temporarily.

Why? Because they're mad that women are being listened to, that men’s voices are no longer given so much power that they can effectively drown out the voices of women.  They're mad because they're not the only ones that matter anymore.  Women around them – women they know, maybe, and women who are allowed to write stuff on the internet, and women on college campuses – well, they’ve stopped talking to men like they’re the most specialest people in the whole world.  And it’s infuriating.

The same thing is going on all across America.  I get it.  My teacher stopped treating me like I was special once too.  I think of the fourth grade me when I hear of white people who fear minorities or immigrants, Tea Partyers in a frenzy about how government doesn’t belong to them anymore, and people complaining that gay and lesbian couples will ruin marriage.  When the phrase "Happy Holidays" and the idea of a non-white Santa makes a certain segment of the population lose their shit, a part of me gets it.

Across this society for, say, the last 150 years (slavery ended in 1868), the ability of the people at the pinnacle of the social, cultural, and economic pyramid to remain there has been slowly (and incompletely) eroding.  Their asses are getting kissed less and less and it makes them so mad and it feels so unfair!   Megyn Kelly's comment on Fox News – “just because it makes you uncomfortable doesn't mean it has to change” -- is the perfect illustration. Who does she mean by "you"?  Because lots of us have been feeling uncomfortable for a very long time.  The difference is that now it's the people in power who are starting to feel uncomfortable.

So, go ahead little boys.  Spam the anonymous reporting form if it makes you feel powerful.  Your childish tactics reveal that your privilege is waning.  And, frankly, it makes me smile.