Robertson's homophobic comments reveal the gap between the simplified, TV version of his life and the real one 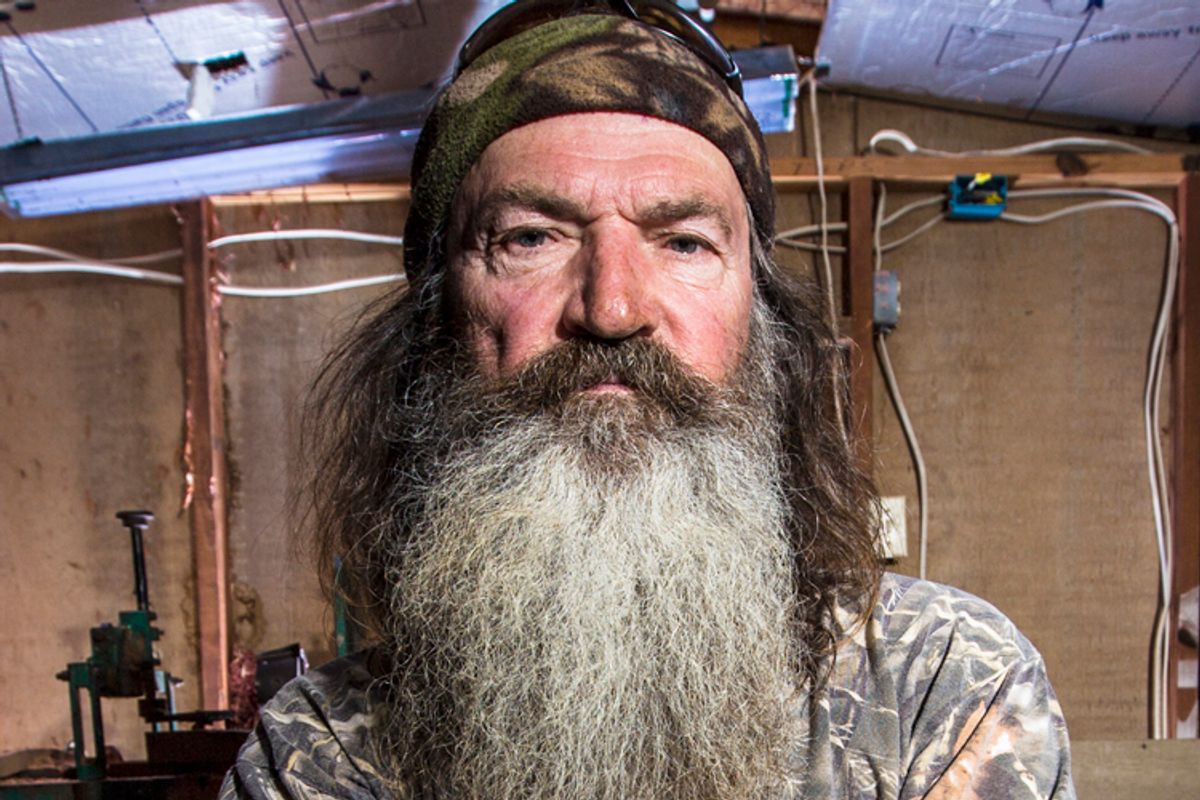 As has been exhaustively reported, "Duck Dynasty" star Phil Robertson was suspended yesterday for anti-gay sentiment he expressed during an interview with GQ. By now, you almost certainly have read the galvanizing remarks in question and may or may not have taken offense. Maybe you've already called A&E to chastise the network for not pulling the program altogether. Or maybe you've signed the petition to put Robertson back on the air. As for me, I was initially disturbed when I read the old bigot's words. But, now, I can't stop thinking that I would love to have watched him say this stuff.

It seems like, to me, a vagina—as a man—would be more desirable than a man’s anus. That’s just me. I’m just thinking: There’s more there! She’s got more to offer. I mean, come on, dudes! You know what I’m saying? But hey, sin: It’s not logical, my man. It’s just not logical.

I've never seen an episode of "Duck Dynasty" in my entire life, but I can't imagine that anything they capture on camera is more real than this. No disrespect to GQ and a long tradition of great print storytelling, but this sounds like it would have made for very engaging TV. Whether or not you cotton to Robertson's beliefs about gays or blacks, you have to admit he seems at least earnest, if not passionate.

Don't worry, I'm not going to go all Salon-rogue and evoke Sarah Palin's uninformed free speech argument. I understand that as a corporate entity with viewership and revenue at stake, A&E has every right to sanction Robertson in whatever manner the network deems fit. I'm only taking a moment to lament the definition of reality as it pertains to the global institution, the reality TV show.

Again, I've never seen "Duck Dynasty." But if it is, as Wikipedia states, about "the lives of the Robertson family," I would hope to see as complete a representation of that family as A&E is able to provide. That includes Robertson's beliefs, as he is the patriarch of said family and the reason for its wealth and celebrity. The fact that I don't share his feelings wouldn't make him less interesting to me. (Were I interested at all.) In fact, I find his transparency in this article kind of relieving. As a black man living post-civil rights, I've always been more afraid of closet racism than the overt kind. With the latter, at least you usually know when it's happening to you.

Of course, this is not the A&E that made its bones airing "Biography." The business of reality television is not to accurately portray the people it claims as subjects. Reality TV reduces people to clockwork golems that either please or outrage in small doses. While Robertson's comments undoubtedly had GQ writer Drew Magary salivating like Daffy over the journalistic treasure trove he'd just stumbled over, such open bigotry is way too polarizing for basic cable. (Kathy Bates calling Angela Bassett a "nigger witch" on "American Horror Story: Coven" doesn't count, silly. Phil Robertson is a real person.)

So, no, I'm not saying put the man back on. That would trample the superficially sensational but political correct baseline for reality television that has been established over years of trial and fantastic error. I'm just saying that on the perfect-imperfect television of my imagination, there is a place for Phil Robertson to freely spew his Bible-based conservative rhetoric and room for me to scream righteous indignation back at the screen -- or simply sit back and be fascinated. The latter is more likely, honestly. GQ made Phil Robertson seem like a pretty intriguing guy.

As it is, however, I have never watched a single episode of "Duck Dynasty." And, now that I know for sure that I am only getting part of the  story -- and that part is just about bearded dudes hunting ducks -- I probably never will.