Pick of the week: The teenage face of inequality

Two teens grow up the hard way in the gorgeous, heartbreaking British indie "The Selfish Giant" 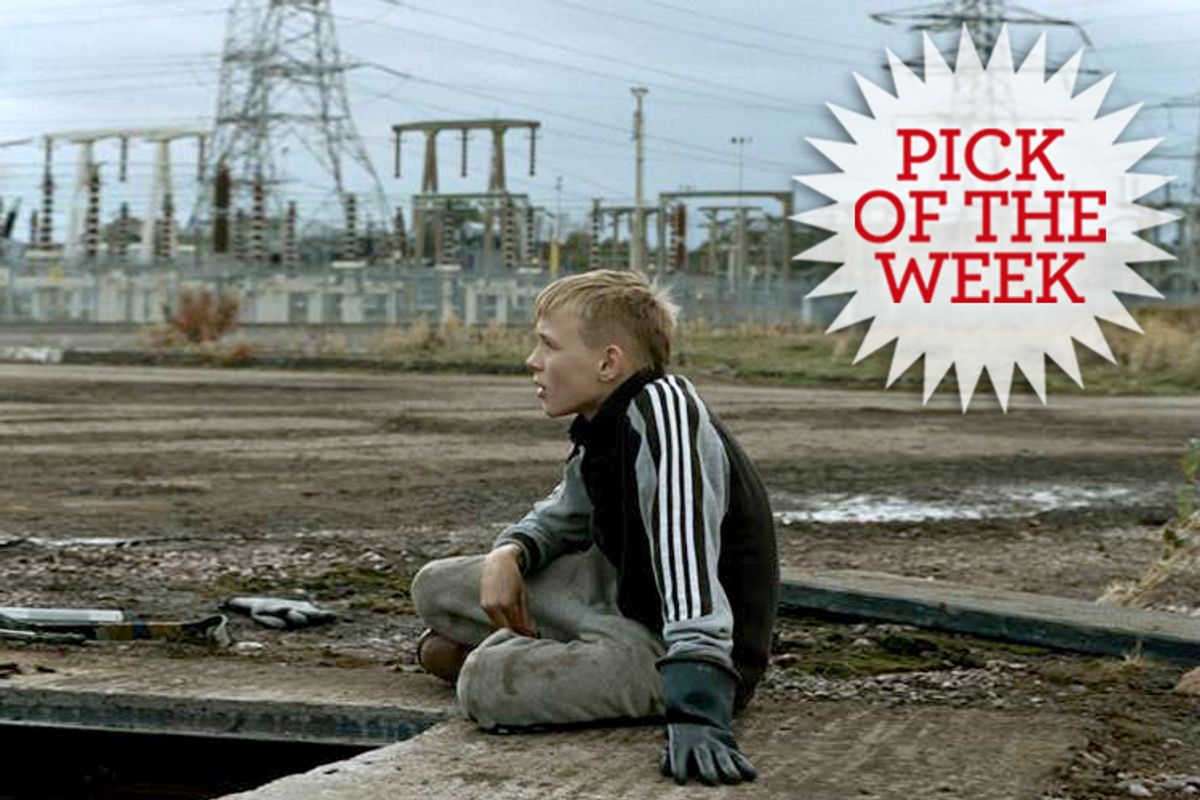 From its opening scene, Clio Barnard’s “The Selfish Giant” strikes a delicate balance between hard-bitten British social realism in the tradition of Ken Loach and Alan Clarke and mist-shrouded fairy tale, a balance that carries through the movie’s shattering, tragic climax and its final hint of redemption. This tale of two dead-end teenagers left to their own devices in the ass-end of nowhere, English division — specifically, on a “council estate” (or housing project) in the West Yorkshire city of Bradford — is not an easy or comforting viewing experience. But it’s so assured and accomplished, so rigorous on both a human and technical level, and so clearly driven by love for this harsh landscape and its hardened people, that I was entirely swept away by its characters and their story. (Yes, the Yorkshire dialect in “The Selfish Giant” will challenge American comprehension, but never fear. Subtitles are provided!)

Barnard is a rising English filmmaker, almost entirely unknown in the United States, whose roots lie in experimental documentary. (Yes, I realize I have just terrified and driven away three-quarters of the potential audience. Shall we proceed?) Although she personally comes from a middle-class, educated background, Barnard grew up in Yorkshire and knows the environment well. While she was making her arresting 2010 documentary “The Arbor,” a semi-biographical film about Bradford-born playwright Andrea Dunbar (who died of a brain hemorrhage at age 29), Barnard befriended two local boys, school dropouts who were ostracized even amid the downtrodden working-class districts of Bradford. They were young but seemed like throwbacks to an earlier era of British life; they weren’t interested in fashionable clothes or Nike shoes and didn’t do drugs. Instead, they spent their days working as “scrappers,” roaming Bradford with a horse and cart collecting scrap metal and copper cable, by fair means or foul.

Barnard’s real relationship with those two boys becomes the basis for her fictional portrayal of a pair of Bradford teens called Arbor and Swifty, played respectively by Conner Chapman and Shaun Thomas, two remarkable nonprofessional actors she recruited from Bradford’s council estates. (The name Arbor specifically recalls both the title of Barnard’s previous film, and Andrea Dunbar’s best-known play.) From the perspective of middle-class adult officialdom, Arbor and Swifty are delinquents and misfits: They do poorly in school, get in fights and commit petty crimes, and have evidently dysfunctional family lives. Arbor’s older brother is a drug addict in debt to serious criminals; Swifty’s dad, whose universal nickname appears to be “Price Drop,” survives by way of a low-end scam in which he rents furniture from discount retailers and then sells it for cash.

But we largely see the world through the lens of the ferociously loyal friendship between hotheaded, precocious Arbor and gentle, introverted Swifty, who in spite of everything are devoted to their families and determined to seize the opportunities life presents them. As Barnard has put it, this is a story of profound love and friendship played out against “an adult world where something has gone horribly wrong.” That something could certainly be described, from my perspective, as the profound inequality engineered into the capitalist societies on both sides of the Atlantic since the era of Thatcher and Reagan, which has left poor kids from Bradford to the Bronx permanently excluded from so-called prosperity. On the other hand, I’d love to read an intelligent conservative take on “The Selfish Giant,” which could also be understood as a fable about the risks of entrepreneurship. (If Arbor and Swifty believe in anything, they believe in never relying on anyone or anything beyond themselves.)

Arbor is delighted that he has finally been expelled from school and can spend his days roaming the urban-rural fringe of Bradford — so memorably captured in Mike Eley’s digital cinematography — in an ever more dangerous quest for contraband metals. (Apparently stripping the copper from overhead train wires and electrical pylons is a significant aspect of Britain’s underground economy.) Swifty has only been suspended from school, and more or less intends to go back, but in the meantime he can pick up a few bob caring for Diesel, a racehorse owned by a nefarious scrap-yard proprietor called Kitten (Sean Gilder, of the British TV series “Shameless”). Kitten is a powerful and ambiguous character, part surrogate parent and part shameless exploiter, and on both sides of the equation he can tell himself he’s teaching these two lost boys how the adult world actually works.

Kitten plans to run Diesel in an illegal “road race,” driven by a rider in a sulky or small cart and run on an empty highway just after dawn. (This is yet another piece of genuine sociology: The road races of rural Britain and Ireland, long associated with the “traveling people,” have made a comeback in the era of YouTube.) Meanwhile Arbor has begun to contemplate braving a high-voltage power line in search of its arm-thick strands of copper wire, and perhaps because the accomplished adult thieves around Kitten’s scrap yard insist it’s an insane and desperate endeavor. Barnard mixes scenes of Swifty and Arbor alone against the impressive Yorkshire countryside with buzzing, chaotic, claustrophobic scenes of family and pub life. (One of the locations she uses is the pub where Andrea Dunbar suffered her fatal hemorrhage.)

The two young boys in the lead roles are amazingly strong, so convincing and absorbing that they almost overwhelm accomplished adult actors like Gilder, Siobhan Finneran and Rebecca Manley. (The latter two are Swifty and Arbor’s mothers, respectively.) While the British media have understandably drawn a comparison to Loach’s groundbreaking 1969 British film “Kes,” Barnard is just as much following in the footsteps of François Truffaut’s “The 400 Blows,” Vittorio De Sica’s “Bicycle Thieves” and Ramin Bahrani’s strikingly similar 2007 New York indie “Chop Shop.” I advise you to brace yourself; like those films, “The Selfish Giant” may tear your heart out. But the passion and possibility Barnard shows us among forgotten people in a forgotten place are fully worth it.

"The Selfish Giant" is now playing at the IFC Center and the Elinor Bunin Munroe Film Center in New York, with wider release to follow. It's also available on demand from cable, satellite and digital providers.