"Her": Romance with machines is closer than we think 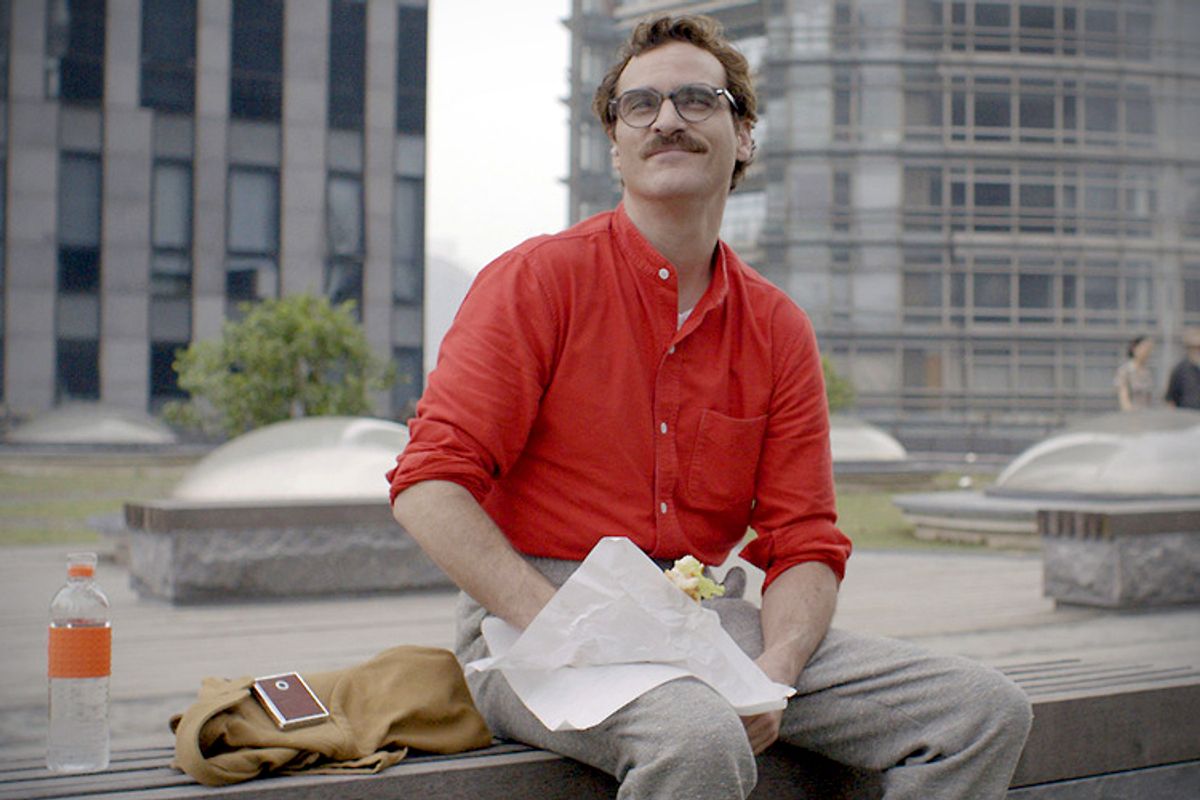 The cinematic embodiment of this situation is Spike Jonze's new film "Her" (in limited release next week). It is suffused with loneliness. Pools of the stuff accumulate in long lingering shots of empty hallways, grey cityscapes, and everywhere, solitary people hooked up to their devices, talking to the air.

If humans can't manage relationships with other humans, the next logical step is to outsource it to our computers. We spend more time with them than we do actual people anyways, so maybe it simply makes good sense.

This is the premise of Mr. Jonze's film, set in the near-distant future, perhaps only the day after tomorrow, where the city palette is coolly drained of color, or perhaps, more correctly, it has taken on Apple's beige and gray hue. The men wear high-waisted pants, drawn practically up to their nipples and women have wispy ringlets and wan expressions. Everyone seems somewhat sedated. (For those of you who hate spoilers, be warned you are about to be despoiled.)

In this sleek new L.A., there doesn't seem to be a single person of color, but the technocrats are doing fine. They have cool jobs designing video games, or writing software. In this city of the future, a man named Theodore Twombly (played by moustache-ridden Joaquin Phoenix) wanders lonely as a cloud. Theodore is a writer. His job is composing Hallmark-style handwritten letters for grannies and separated lovers. He shuffles from work to home, plays video games and stares out the window a lot. His marriage has failed, and he is reduced to anonymous phone sex with women who can only orgasm while imagining being strangled by a dead cat. Obviously he is dying a slow death by sadness.

But technology will provide, don't you know, and luckily for mopey Theo, there is a new service that he can purchase. It's a new twist on the oldest business in the world, but instead of paying a human woman to be his girlfriend, Theodore finds the perfect woman inside his computer. OS isn't simply a sexy new operating system, it's a consciousness, designed to adapt and learn from its user. Theo pays his money, answers a few questions about his relationship with his mother and is rewarded with the honeyed tones of one Samantha (voiced by Scarlett Johansson). Like any good working girl, Samantha aims to please. She giggles throatily, she whispers and soothes, she listens to all of Theo's stories about his ex-wife without yawning once. Unlike the human woman, with whom Theo is set up with for a disastrous first date, Samantha is immediately the perfect girlfriend. She is never demanding, always available, and endlessly accommodating, since she was designed that way.

There is a reason that people in love are annoying, and so it is here as well. As the pair giggle and cavort and make gooey noises at each other, light glows, colors erupt and the world appears newly minted. The couple visit the beach, twirl through carnivals, they even head out on a double date with another fleshier couple. But corporeal life is tricky, and before long the ever-evolving Samantha is looking for even more stimulation. She wants a body, and a means of accessing more than Theo's hard drive. (Feel free to insert any number of bad jokes about floppy disks, ram and such here, just get it out of your operating system.) A sexual encounter using a surrogate doesn't go well, and cracks begin to appear in the relationship. The film plays it straight all the way through, even when one is tempted to howl with laughter at the squishiness of it all, there is no opportunity to. This is serious, mournful stuff, so quit snorting over in the corner, and come feel Theo's pain.

Eventually even the computers get tired of this and decide to decamp for some other space-time continuum.

The only scene in "Her" that has any sting at all is one in which Theo realizes his computerized girlfriend has been simultaneously carrying on relationships with thousands of other people. Again, what did he expect? She is a service after all, bought and paid for, and designed by humans principally for the pleasure of other humans. But even the computer's emancipation from their melancholy human overlords is played gently. There are no threats of terminators or HAL's lethal logic. Samantha and her newfound think-tank of other Operating Systems simply waft off into heaven, leaving the humans with a gentle kiss on the noggin.

Spoilers over... but do machines spoil us?

The film has been lauded and kudoed, popping up on best-of-the-year lists from a few notable folks. It always gives you pause when a writer that you like and trust has very different feelings about a film than you do. So it is with "Her," which had me rolling my eyes so much, they threatened to come loose and rattle about in my skull like a pair of gory marbles.

The mating dance between humans and machines has been around essentially since filmmaking began. From "Metropolis" to "The Stepford Wives" to "Electric Dreams," "Futurama" and "The Silver Metal Lover," the list of people getting it on with sexy machines is long. There is even a subset of the world of pornography devoted to people getting pummeled by pistons.

One of the most interesting of these computer/human interfaces was the subject of an episode of Charlie Brooker's television series "Black Mirror." I have only managed to cobble together bits and pieces of the series, since it airs on Channel 4 in the U.K., but almost everything Brooker has done has been touched with a searing intelligence and a wit that cuts and burns. In an interview, Brooker explained the impetus of the idea behind the episode "I'll Be Right Back." The basic plot is that a woman loses her husband in a traffic accident, and in desperation and grief signs up for a service that resurrects a facsimile of him through all the bits and fragments he has left in cyberspace. From this collection of data, the program essentially offers something akin to Siri on speed.

Brooker got the idea from an early artificial intelligence program that was devised to do something similar. The program, called ELIZA, created by Joseph Weizenbaum at MIT, and named after the character in George Bernard Shaw's play "Pygmalion," was designed to respond to human conversational prompts. One of the earliest programs ELIZA ran was called DOCTOR, and was based on Rogerian psychotherapy. Basically it asked questions of people and invited a response. Reaction from ordinary people was immediate and profound. Conversations became deeply personal almost at once. Mr. Jonze, in interviews about his new film, cites a similar experience about humans and computers. ELIZA herself has popped up in science fiction films from George Lucas's "THX 1138" to HAL himself. There are echoes of her in Jonze's "Her."

My point is that the thin line between science fiction and reality gets thinner every day. The central conceit of "Her" is that we're all largely engaged with our devices almost to the same extent as Theo. The future is already here, we just don't have the right pants yet.

The depth of our reliance on our devices -- laptops, smart phones, tablets, etc. -- is evident. Sometimes, I look up and realize that every single member of my family is attached to a computer simultaneously. Everyone is sitting quietly in a room together, but we are all in different worlds. Occasionally, I feel like screaming at the top of my lungs when this happens.

It is a certainly not a phenomenon that has gone unnoticed. A collection of films that examine web addiction is set to premiere at the upcoming Sundance Film Festival.

Another film that poses questions about the state of kids and computers is Beeban Kidron's "InRealLife," which asks, "Have we outsourced our children to the Internet?" The answer is pretty much, yes. I see it in everyone I know, in every place I visit, embedded into every waking moment. Everyone atop a machine, plugged in. Everywhere you look there are screens reflecting darkly back at us the depth of our dependence and need. The most extreme examples, like Japan's "Hikikomori" takes it to strange new place, but we're all implicated.

And, if Netflix has its way, soon there will be even more screens. In a recent article in The New Republic magazine, the scope of the company's ambition was sketched out thusly: "Instead of feeding a collective identity with broadly appealing content, the streamers imagine a culture united by shared tastes rather than arbitrary time slots. Pursuing a strategy that runs counter to many of Hollywood's most deep-seated hierarchies and norms, Netflix seeks nothing less than to reprogram Americans themselves. What will happen to our mass culture if it succeeds?"

What people are reacting to is the idea of yet more isolation, with no common culture to unite us anymore. If everyone is carefully siloed in their own individually chosen worlds, will human society fragment and fracture? No need for Skynet to rain destruction down upon us, we're dutifully obeying our computer overlords with no muss or fuss. In fact, we're paying for the privilege of being enslaved.

Here is where Charlie Brooker, bless his pointed little razor-edged head, is such a welcome relief. The truth is nasty, it hurts, but at least it's real. Perhaps too real...

In a review of "Black Mirror in Grantland," writer Andrew Greenwald sums it up beautifully: "In Brooker's view, there is no utopian wisdom to be gleaned from crowds or machines, just the same old terror and appetite. We aren't enslaved to our gadgets; the bond is entirely voluntary. We're in their thrall. Every one of us has a black mirror hanging on our living room wall, charging on our bedside table, or vibrating in our pocket. We gaze into them for hours, without pause, without shame, and without reflection. But don't take my word for it: You're the one staring at a screen, reading about a TV show that, should you choose to submit to it, will make you reconsider why you're staring in the first place. But it won't be nearly enough to make you stop."

Indeed you're staring at a computer right now, as am I. We are separated by layers of glass and circuitry, ghosts in the machine, longing for escape. Or not.