When beasts were people: The long, strange history of animals in court

Modern law scoffs at the suggestion that animals have legal rights. That wasn't always the case 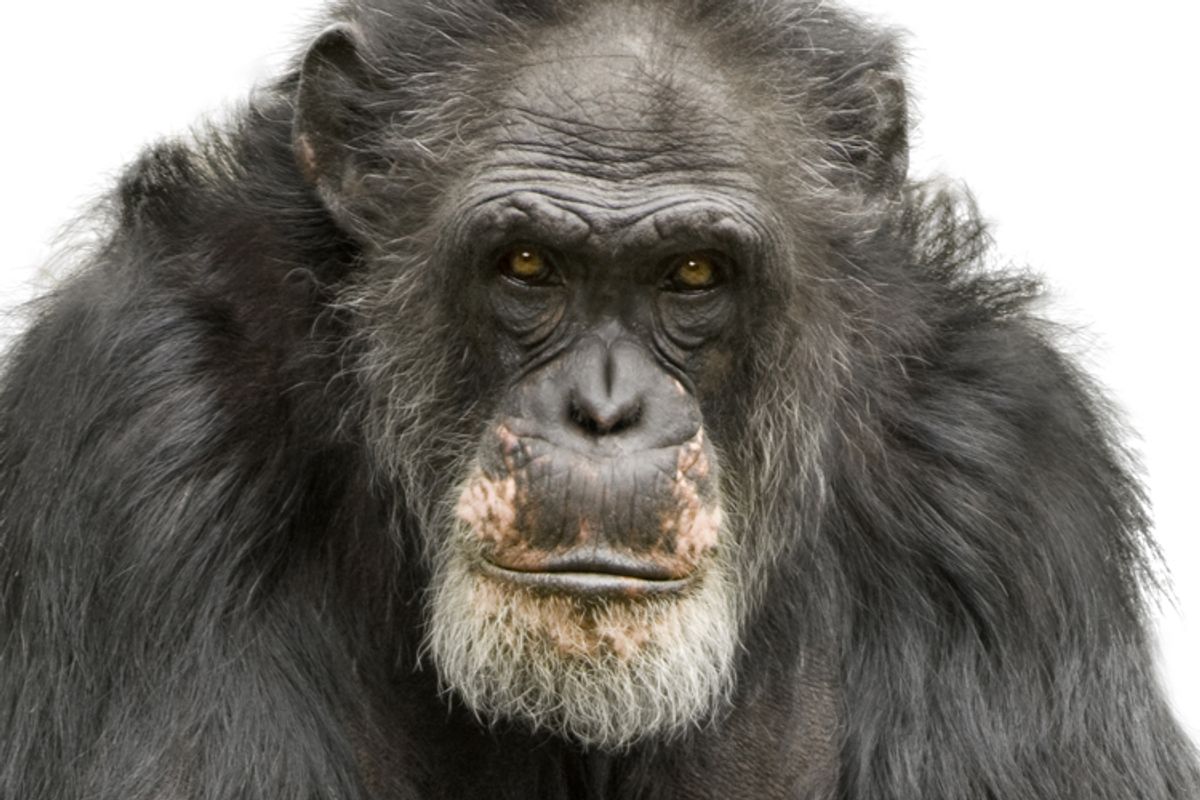 A funny thing happened in some New York courts this month. Lawyers filed writs of habeas corpus with three judges seeking to end the allegedly illegal detention of their clients. It would have been unremarkable if the plaintiffs — Tommy, Kiko, Hercules and Leo — hadn’t all been chimpanzees.

Because they were, the writs made headlines around the world. The judges all dismissed the lawsuits, but the animal rights activists who brought them have vowed to wage a protracted legal campaign. To supporters, the move is a bold step forward for animal justice. To detractors, it’s worse than bad legal theory — it’s just plain bananas. Either way, the prospect of a chimp filing suit in court has been greeted as a total novelty. But , in fact, the idea of treating animals as people before the law isn’t new, it’s just long forgotten.

The notion of animals taking their human captors to court is at least a millennium old, first set down in writing by a brotherhood of dissident Sunni scholars in 10th-century Iraq. More strikingly, the actual practice of trying animals as defendants in court dates back to at least ancient Athens, and it was common practice in Europe into the 18th century. The history of animals on and at trial, in both thought and deed, is more than just a curiosity. It serves as a reminder that human attitudes toward animals are anything but fixed, and that the current legal paradigm, in which animals are property, is as much a historical curiosity as older systems for treating them.

For hundreds of years, European animals were regularly tried in court for their alleged misdeeds. Ecclesiastical courts went after rodents and other pests for damaging crops. The locusts, serpents, weevils, rats and flies tried before these courts weren’t just liable to damages and banishment, but also excommunication. Civil criminal courts, meanwhile, tried livestock for violence against human victims. Judging by surviving records, pigs were particularly fond of killing babies, and at least one such pig was dressed in human clothing for her 1386 hanging — raising the question of whether something can be “adorably macabre.” And of course there were the bestiality trials, in which both parties to the coupling faced prosecution.

The authoritative source on the subject is E.P. Evans’ 1906 tome, "The Criminal Prosecution and Capital Punishment of Animals." It’s filled with countless unlikely tales, like that of the 16th-century French jurist Barthélemy de Chasseneuz, who showed early signs of brilliance by his defense of a group of rats who were accused of eating a barley crop. When the rats failed to show up for their first court date, he argued that the summons had not been issued widely enough. After a new summons was issued from all the pulpits in the region, and the rats failed to show up for a second court date, de Chasseneuz justified their absence “on the ground of the length and difficulty of the journey and the serious perils which attended it, owing to the unwearied vigilance of their mortal enemies, the cats.”

The trials were serious affairs, and the four-, six- and non-legged defendants were treated about as well as humans. They were afforded due process, given counsel at the public's expense, and sometimes even vindicated. In 1750, a French she-ass was caught in flagrante with one Jacques Ferron. At trial, the prior of the local convent and other citizens attested that, having known the she-ass for four years, “they were willing to bear witness that she is in word and deed and in all her habits of life a most honest creature.” The donkey walked; Ferron hanged. When a French sow murdered 5-year-old Jehan Martin, her six piglets were charged as accomplices, having been found at the scene covered in blood. But, for lack of evidence, they escaped conviction.

Sometimes, animals fared better than humans. In 13th-century Burgundy, horses and oxen who killed people were sold to new owners. Jews, meanwhile, were hung by their hind legs. It’s an alarming reminder that legal categories like white, male and Christian were once as fundamental as human is today; in Shakespeare's "The Merchant of Venice," Gratiano accuses Shylock of being infused with the soul of a wolf who had been hanged for murder.

With the distance of centuries, stories of animal trials make for good entertainment, but they also offer a window into a different mindset. It seems that these medieval villagers and jurists were at once more attuned to animals and more confused about them than we are today. Living side by side with livestock, they understood that cows and pigs are capable of personality and individuality, a truth that’s lost on the modern world, where livestock are treated as commodities. But the trials also betray a naïve pre-Enlightenment anthropomorphism, imputing to animals a humanistic moral agency. It was always the animals that were considered at fault for their actions, not their owners, who sometimes even received compensation when their livestock were executed.

The medieval legal treatment of animals reflects at least in part an intuitive desire to treat them fairly. But the fact that they enjoyed rights only as defendants reflects also a Christian belief in a spiritual distinction between humans and animals. Channeling Aristotle, Thomas Aquinas concluded that unlike man, animals have no immortal soul. Though very few medieval Europeans would have direct knowledge of Aquinas, it’s likely in part due to his influence that the idea of bringing charges against humans on behalf of animal plaintiffs did not occur to them.

It did occur, though, to Ikhwan al-Safa', or the Brethren of Purity. The Brethren were a secret society of freethinking Muslim philosophers who lived in Basra (modern-day Iraq) during the 10th century. They produced an encyclopedia with 52 treatises. One of those treatises, "The Animals’ Lawsuit Against Humanity," contains some striking parallels to the lawsuits filed this month.

In it, animals want freedom from the dominion of men, and they seek redress in the court of the king of the genies. The men contend that “[a]ll beast are our slaves, and we are their masters.” That is essentially the position of the American legal system, that animals are property.

In the Brethren’s treatise, the animals detail the great injustices they’ve suffered at the hands of men. The men muster all sorts of arguments in defense of their behavior. They cite the Koran and the Bible to argue that animals are made to serve humans and appeal to the virtue of humans and the variety of their accomplishments. But the animals beat back their arguments, taking particular care to delineate the faults of all categories of humans, including astrologers, lawyers and merchants. (They reserve their harshest scorn for writers, “for in the whole world there are no men more villainous and rascally.”) The animals are so convincing that, at one point, the king of the genies makes preparations to compensate the men for the imminent loss of the animals.

Only at the very end do the men come up with a convincing defense for themselves: that humans are superior to animals because they have the ability to dwell eternally in paradise if they are obedient to God, and that even “if we are sinners, and we do not obey him, still our salvation will be effected through the intercession of the prophets.”

For the men, it’s a deus ex bestia, God from the beast. Bowing to this logic, the king of the genies rules, “Let all animals be submissive and obedient to man, and let none depart from their allegiance.” Even the plaintiffs were sold, for “[t]he animals consented, and being satisfied, they all returned to security and peace in their homes.”

And there we have the state of thinking a thousand years ago on the question of whether animals should be slaves of humanity or be given the right to their freedom: Humans’ treatment of animals would be indefensible if it weren’t for the fact that God had granted humans a favored status. All of their other defenses fall short, and they are only saved by appeal to an immutable divine truth. It’s a defense that would have held up with Thomas Aquinas, had he considered the same question.

But times have changed, and the assertion that God has simply granted homo sapiens a special exalted status no longer makes for a great legal argument. The theory of evolution long ago undermined the certainty that humans are fundamentally distinct from other animals. Recent science points us to the conclusion that many of them are more similar to us than we’d thought — something our medieval forebears apparently intuited.

The notion of granting animals legal personhood and formal rights may strike us as radical, but considering that the law ought to reflect science and a society’s philosophy, it’s actually long overdue. In 1792, the English philosopher Thomas Taylor wrote "A Vindication of the Rights of Brutes." It was a satire, in response to Thomas Paine’s "Rights of Man" and Mary Wollstonecraft’s "A Vindication of the Rights of Woman," those cornerstone expressions of humanistic enlightenment values. Taylor hoped to show that extending rights to all men and to women was comparable to extending rights to animals. As it turns out, he was right; just a few centuries ahead of — or perhaps behind — his time.