Edward Snowden's heroic work: Our media must match his courage 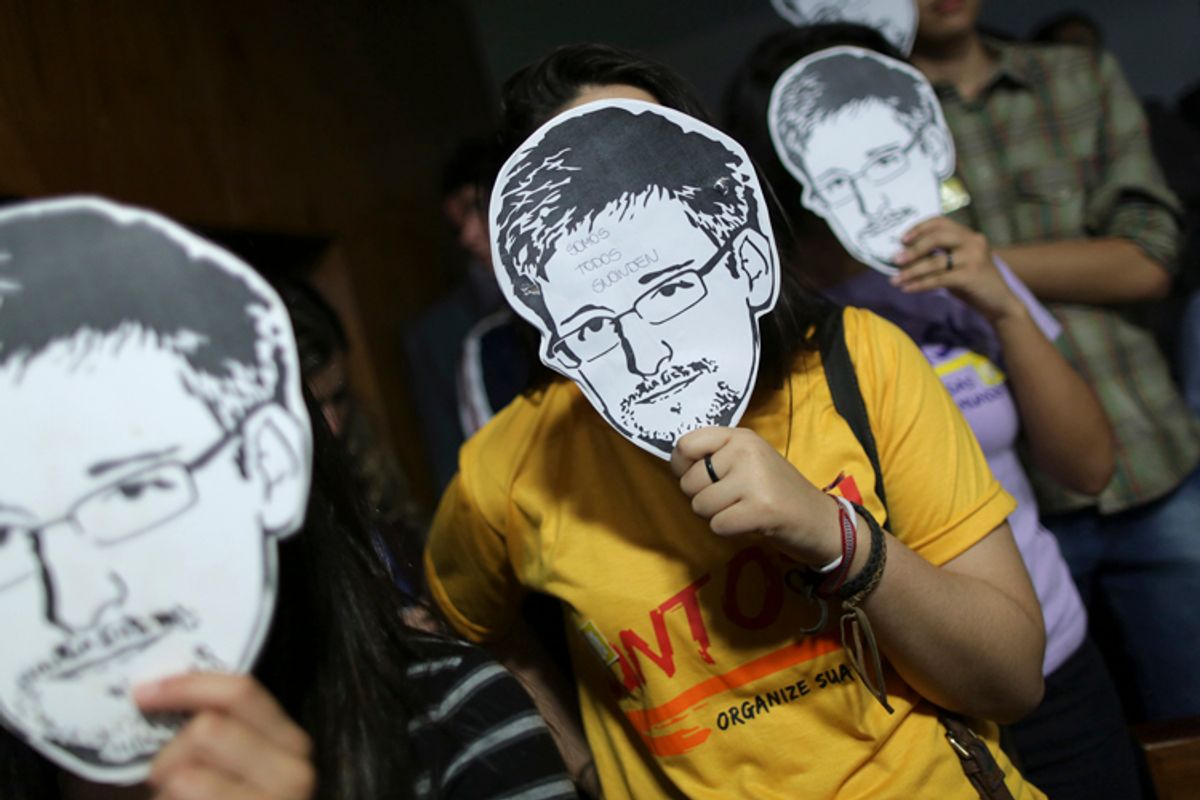 Across the globe, journalists continue to face threats, invasions of privacy and violence simply for doing their jobs. Those threats aren't coming just from criminal syndicates and dictators -- they're coming from the world’s most powerful governments.

2013 saw a litany of attacks on the media too numerous to cover in one article. From the Department of Justice tapping scores of AP reporters’ phones, to China coercing journalists into self-censorship under implied threat of expulsion, to the U.K. hauling the editor of the Guardian before a hostile Parliamentary interrogation, we have seen an unprecedented rise in the scope and intensity of efforts to silence journalists.

Unfortunately, these attacks are working. Nearly one in four American reporters have self-censored for fear of government surveillance, according to an October survey. This self-censorship is taking the form of turning down assignments, limiting research and avoiding some topics altogether for fear of falling under the watchful eye of our government’s sprawling, quasi-legal surveillance apparatus.

Even worse than the self-censorship is the outright hostility many in the media have shown toward those who have revealed -- and continue to reveal -- the mind-blowing scope of the mass surveillance dragnet that is currently monitoring and/or storing what appears to be a huge percentage of all of our digital communications, including phone calls. Edward Snowden, working with Salon alum Glenn Greenwald, Laura Poitras and Barton Gellman, revealed that those at the very highest levels of our ostensibly democratic government are lying to us. Instead of investigating and demanding accountability from the perpetrators, too many in the media have opted for metaphorically shooting the messengers (indeed, some would apparently prefer the shooting to be literal).

Given this state of affairs, discussions of objectivity and activism in journalism take on an urgent importance. In a recent conversation, David Daley, our editor in chief, said, “There are higher ideals than objectivity,” a quote I carry with me in my work.

For those of us in the media, some of the questions we’re grappling with are born of an immediate pragmatism. For example: How can journalists work when they’re unable to protect their sources electronically and with the ongoing threat of legal repercussions?

As citizens, the questions we face become more broad and cut to the very core of what it means to live in a democracy: What is the impact to businesses when Internet traffic and private networks are breached or they're required to provide backdoors or hackable vulnerabilities in their products? What will become of our relationship to technology if no one trusts the platforms we use all day long? What is the impact on personal relationships when NSA employees are able to monitor loved ones', co-workers' or enemies’ Internet traffic? What are we condoning?

Although a White House advisory committee report released last week urges reform and suggests a possible shift away from the “total surveillance” ideology, we can’t expect the surveillance state to rein itself in on its own accord, nor can we expect technology giants to solve these problems. Confronting these questions, exposing the facts and pressuring the government to restore our rights and abide by the laws they created is the responsibility of the people -- and the media’s job is to be a voice and advocate of the people.

Despite the complacency and hostility of many in the media regarding these ideals, I’m hopeful about the rising chorus of critical voices. From brave editors like the Guardian’s Alan Rusberger to mainstream U.S. outlets including the New York Times and Washington Post to First Look Media, Glenn Greenwald’s exciting new venture, to independent sites like us, the work of exposing and demanding accountability of unchecked power will continue.

As we enter a new year, Salon will continue its mission of producing fearless journalism, sparking meaningful conversations and providing a platform for a diversity of talented writers. We are grateful to you, our readers, for supporting Salon, and hope we can continue to inspire the dialogues we see on the site every day exploring these questions of democracy, technology and power.

Early this year, Edward Snowden said, “Truth is coming, and it cannot be stopped.” Our goal in 2014 is to help make that prediction a reality.

Cindy Jeffers is the CEO & CTO of Salon.