The POTUS doesn't just love newspaper columnists, he has terrible taste in them. Here they are, in order of badness 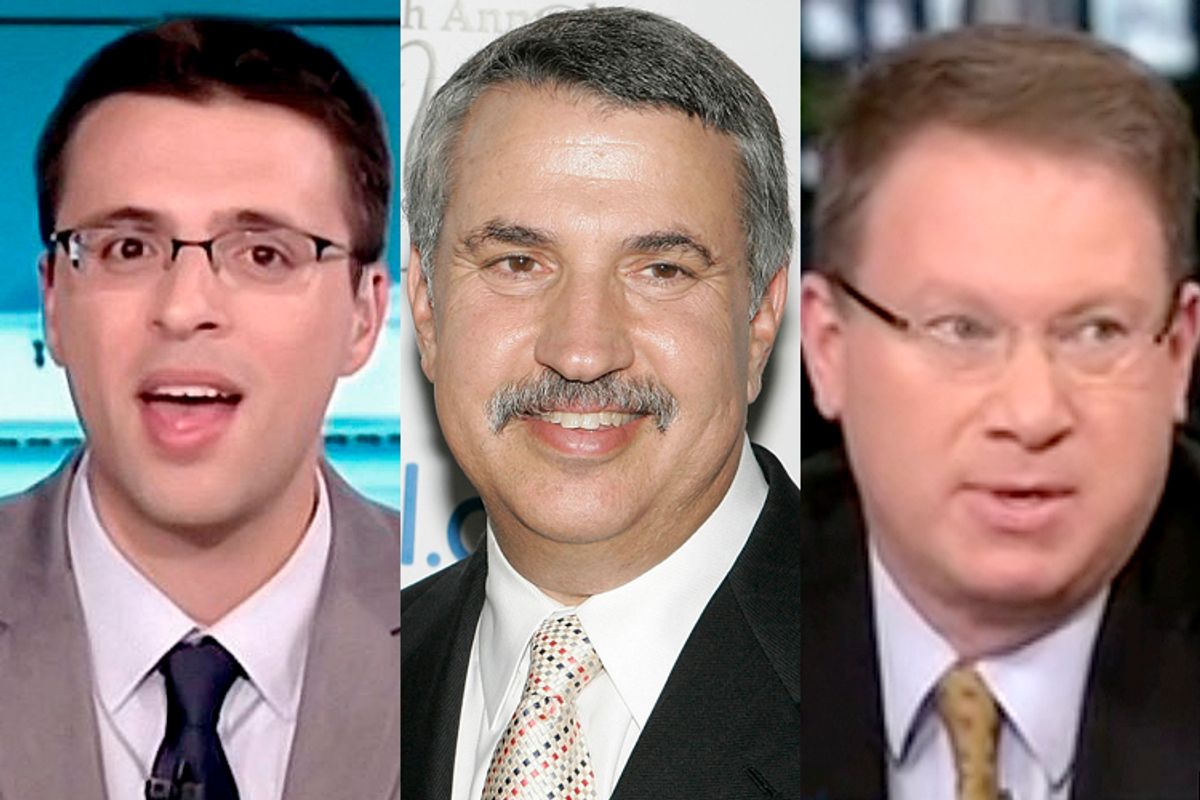 The Hack List is finished (thank god), but its honorees are not. Each of them will continue writing, likely without changing a thing, for, in most cases, years to come.

The list has a point beyond making fun of silly, overpaid people with inflated egos (though I concede that that is a big part of the point). Columnists and pundits can seem inconsequential, especially in an era of media fragmentation. We can plainly see that the Internet has "democratized" the "conversation" to some degree, and our struggling newspapers have less influence, nationally and locally, than ever in American history. A tiny portion of Americans care about Mike Allen's daily email newsletter. Thomas Friedman, perhaps the single most influential newspaper columnist on the planet, reaches an audience of a few million people in a nation of 300 million.

But as a Politico editor could tell you, it's not how many you reach, it's who. Among Friedman's readers: much of the nation's executive class. Among Allen's? Nearly everyone who works in any capacity for every member of Congress. That's why it's necessary to criticize them. They really do "drive the conversation," to use a particularly odious Politico-ism. Both what is considered politically possible and politically desirable in this country depend in large part on what a handful of mainly older, mainly white and overwhelmingly male columnists and pundits say. Who is let into that conversation and who is left out of it has consequences for all Americans. That was made clear 10 years ago, in the run-up to the invasion of Iraq, which the nation's premier political opinion makers (what we once called "Thought Leaders") almost universally supported. The Bush administration was aware of this, too, and devoted more efforts to convincing them than to trying to win over what we vaguely call "the people."

President Barack Obama. Barack Obama loves newspaper columnists. He reads them, because he thinks they offer smarter commentary than one hears on cable news, and he invites them to the White House regularly, so he can influence their writing. Unfortunately, judging by media reports of his favorites, he has terrible taste in newspaper columnists. Every columnist ever specifically named as an Obama favorite, with one exception, is white. None are women. Nearly all of them, to a man, vigorously supported the invasion of Iraq in 2003. Is President Obama ... the biggest hack of all? (No, Mike Allen is. The president is a decent writer, everything else about him aside.)

Because people like lists, and in the spirit of every media outlet's decision to stop thinking and just rank things in the week before this holiday break, I have ranked Obama's reading list in order of hackishness. Every name on the list is directly from articles naming media figures Obama meets with or reads regularly, which can be found here, here and here.

12. Eugene Robinson, Washington Post. The worst you can say about Robinson is that he's a bit dull. He's more right than wrong, which is commendable for any Washington Post opinion fixture. He is, notably, the sole person of color on the list. (He didn't have a column in 2003, so his at-the-time position on Iraq is unknown.)

11. Jonathan Chait, New York magazine. I'm glad to know the president reads Chait, but that gladness is itself a bit demoralizing. While Chait is a top-notch writer, any list in which he represents The Left is a list that isn't challenging any reigning Democratic Party orthodoxy. The guy is among the best in the business at analyzing (and mocking) the right, and we can perhaps thank him for convincing the president, after a few years, that the modern Republican Party does not actually feature a silent majority of David Brookses yearning to break free of a small radical fringe.

10. Josh Barro, Business Insider. Barro is exactly the sort of columnist Barack Obama would read, because he represents a common Washington Fantasy: The Reasonable Republican! Barro and I barely have much in common politically but he is quite smart and much more in tune with reality than most "Reasonable Republicans." He is also a vocal opponent of deficit hawkery, which makes up for a lot in this climate. It is funny to imagine the president scrolling past BI headlines like "THE ULTIMATE GUIDE FOR TIPPING THIS HOLIDAY SEASON" and "GLENN BECK: 'Chris Christie Is a Fat Nightmare'" to get to Barro's columns but we all know that Obama is the sort of boss who has his underlings "print out the Internet" for him.

9. Ezra Klein, Washington Post. Klein is already an institution, and the cutesy "wonk" tendency to imagine that the right charts will eventually lead to the right policy is a dangerous fantasy, but Klein is at least a better influence on Washington policymakers than the various pundits who are constitutionally opposed to empiricism and data.

8. E.J. Dionne, Washington Post. Practically a living caricature of a longtime liberal newspaper columnist. He is, I think, the only person on this list to have openly opposed the Iraq War in 2003, though to call his opposition "soft" would be an understatement.

7. David Brooks. The Columnist increasingly seems like a man who does not really want to be a newspaper political columnist, which makes him perhaps a bit sympathetic, but he's so out of touch with what anyone on the right or left thinks that reading him is completely unnecessary. What is the point of him?

6. Gerald Seib, Wall Street Journal. Too boring for me to even have an opinion about.

4. Jeffrey Goldberg, Bloomberg View. Goldberg has spent years now carefully making himself the most "reasonable" and "rational" voice advocating war with Iran. He is also, for some reason, a self-appointed arbiter of who is allowed "in the Jewish tent."

3. Joe Klein, Time. It seems like everyone has forgotten exactly how terrible Klein was in the Bush era, as one of the most prominent of the many Democrat-hating Democrats who worshiped the cartoonish masculinity of the Bush bros. Everyone, including Joe Klein -- though Klein tends to forget everything he says and writes, once history renders his judgments inexcusable.

2. Thomas Friedman, The Davos Herald-Register. Possibly the dumbest human being ever to write a column for a major newspaper. It's terrifying that a president would take him seriously.

1. Fred Hiatt, Washington Post Editorial Page editor. Hiatt is responsible for the employment of some of the people on this list, which is enough to put him near the top (and obviously publishing Richard Cohen is good for top three), but it's the Post's own unsigned editorials that make him this list's worst. Every week, the Post editorial board pumps out an endless supply of deficit hysteria and calls for "serious" discussions of "entitlement reform" and war-mongering belligerence. Hiatt's influence is felt in nearly every bad idea that won't die in Washington.