10 most surprising things interviewees told me in 2013

From an angry Tea Party congressman to an MSNBC host, here are the quotes I received in 2013 that surprised me most 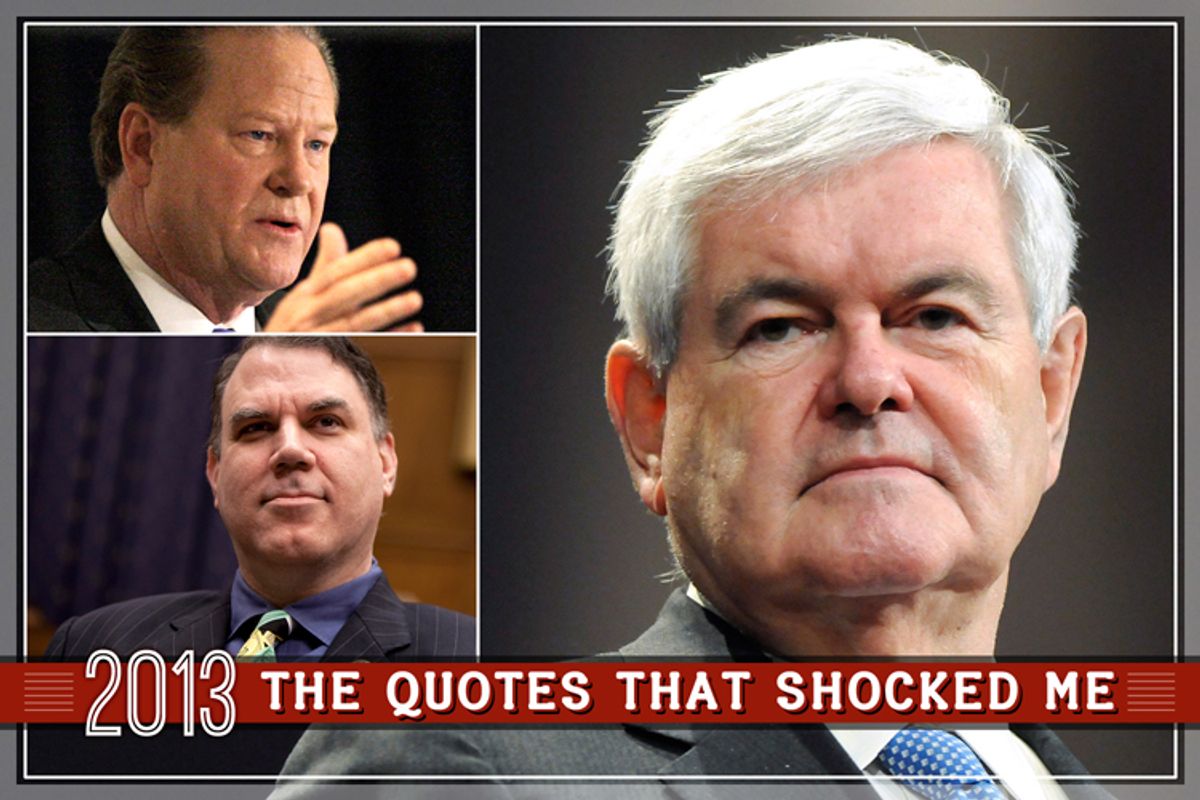 As a reporter, sometimes people tell you just what you’d expect they would. But not always. Here are ten of the most surprising on-the-record things I’ve heard since joining Salon in September – from unexpected candor to creative self-defense, and from surprisingly generous assessments to surprisingly blistering critiques. To keep things interesting, I won’t list anyone – you know who you are – more than once on this list. Feel free to fire up your “I’m surprised you’re surprised” tweets…

U.S. Congressman Alan Grayson, on congressional Republicans: “Many of them [GOP members of Congress] seem loaded…It’s a fact that we all have to live with, and it’s making them violent and abusive towards America.”

U.S. Congressman John Culberson, on President Obama: “He shook hands – first time the United States president has shaken hands with the dictator of Tehran since 1979 is Barack Obama, and he did it right in the middle of when he was telling us [Congressional Republicans] no negotiation. I mean, these are facts. And you’ve seen the response is no negotiation. I mean, that’s inescapable fact. Right? What am I missing?”

MSNBC Host Ed Schultz, asked about workers seeking support against alleged union-busting at NBC-owned Peacock Productions: “Moveon.org has never been an ally of Ed Schultz; why should I help you with a story? Give me a reason.”

Tea Party Congressional candidate Art Halvorson, on the “chained CPI” Social Security cut favored by Obama: “It’s classic government – it’s classic big government, so I think that it’s stealing from the American people…the government borrows money with no intentions of paying it back, and so how they – the way they deal with it is they allow the money to inflate…Without a gold standard or any real standard upon which – with just fiat money, the government is free to do that almost without any limitation…It’s reprehensible."

Former House Speaker Newt Gingrich, on citing “Kenyan, anti-colonial behavior” to explain Obama: “I think that the — what I was citing was a very interesting book, which became a movie, which I think does give you some sense of the origins of some of, of his values. I mean, go back and read his Cairo speech, and look at reality, and ask yourself how could somebody have been that wrong. And I think it’s because he actually believed the mythology of the left… that everybody’s ultimately nice, that everybody wants to have a democracy, that we can really all get along easily, that the U.S. has to be very cautious and restrained because, after all, all these nice people mean well.

Resort Collection of Panama City Beach Vice President Paul Wohlford, on extreme labor abuses alleged by subcontracted workers cleaning his company’s buildings: [The relationship is] like if I go buy a hamburger from McDonalds…If they’re working for our company, they’re going to be treated fairly and equally. But these people didn’t work for me...I’m a victim in this too, because I’ve paid money that may or may not have been paid appropriately.”

NOW President Terri O’Neill on President Obama: “…when even he [the president] has trouble picking the best-qualified person who happens to be a woman, I think that is a startling reminder that even our friends who are men are so used to being in control that so far putting a woman in that position just doesn’t compute for them.”

U.S. Senator Ron Johnson, on whether markets should be concerned if the debt ceiling deadline arrives without a deal: “Not if you had a responsible administration. There would be no cause for concern…it doesn’t have to be Armageddon if you did a little planning, if you were responsible about this.”

U.S. Senator Sherrod Brown, on President Obama and his Trade Representative Michael Froman: “Clearly, trade policy’s not worked for us as a nation. It’s meant profits for companies that outsource, but it’s not worked for communities, for jobs, for manufacturing, for local small manufacturing especially. And so the answer of the elite in Washington is “let’s do more trade deals, let’s do more of it,” when it’s not working. And I think Froman understands that. I think the president understands it. It doesn’t mean they’re as aggressive and forward-looking as I would like to be, but we’re always making that battle.”

Former U.S. Congressman Barney Frank on big banks: “In terms of ‘too big,’ they’re not too big for people to have competition. I guess some people think they have too much political power. In fact if you look at the last few years, the big banks have very little political power…There’s a lot more competition between financial institutions in America than in most parts of the world. There are enough financial institutions I don’t think there’s an anti-competitive situation…I think we in fact took care of the problems that existed in the past. I don’t know what new problems might come up.”