The 5 most compelling video game characters of 2013 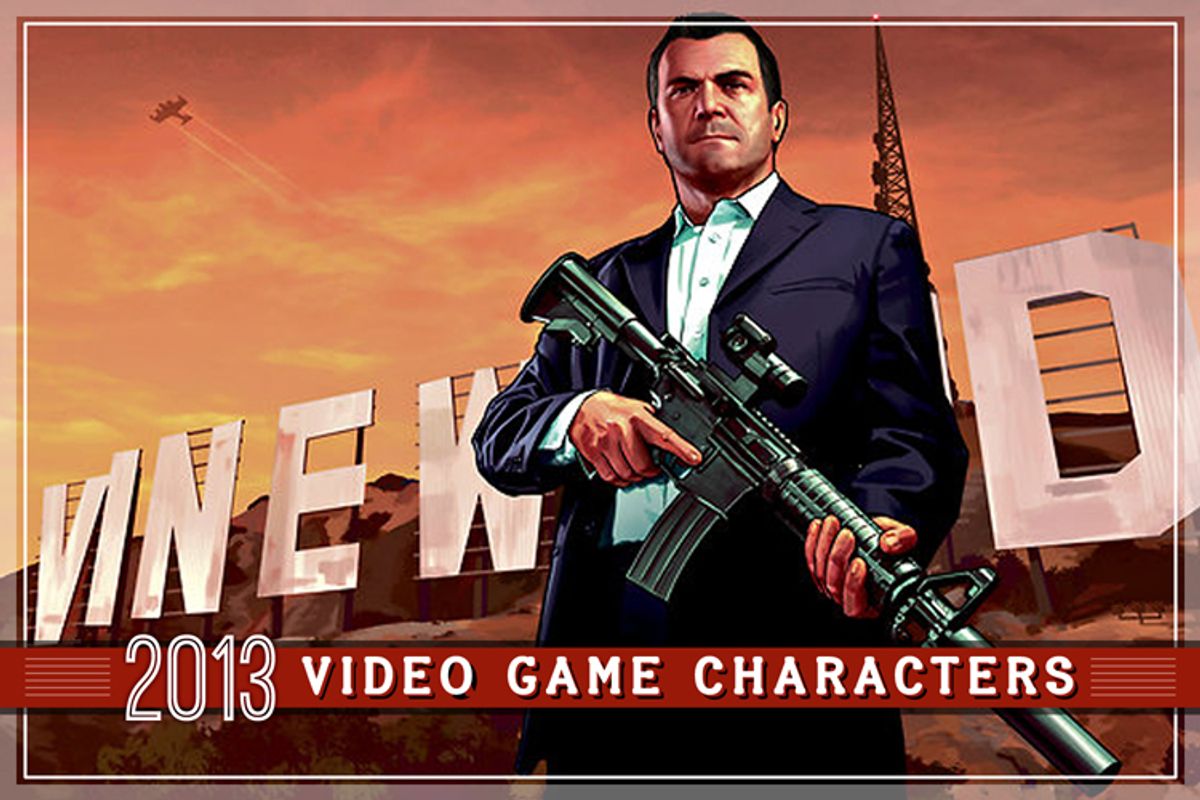 Video games have always come in for criticism. In the early ’90s they were blamed for youth corruption and school shootings, in the early 2000s people like Jack Thompson wrote them off as artless murder simulators, and these days, at least within the community, the debate focuses on the less-than-acceptable gender and racial representation in games. It’s an industry that’s been perpetually dominated by white men, making games for white boys. But things are changing. More than any year before, 2013 was a time of subversion, questioning and action. Developers have listened to the criticisms, and are making games filled with people of all sorts of dispositions. Here are a few characters from this year that show how video games have grown up.

On the surface, Michael looks like the stereotypical "GTA" antihero. He’s angry, he’s funny, he robs banks, and he stockpiles a lot of guns. It’s the usual cartoonish fun, but there are some dark details that really make Michael tick. He’s estranged from his wife, he has a deeply strained relationship with his children, and his return to crime is painted as a sad, depressing response to his wounded masculinity. Some of the most enlightening moments in "GTA V" happen when you take Michael to his psychologist, as he tries to understand the maniac he’s become.

Some people were displeased with the way Lara Croft was portrayed in this year’s reboot of "Tomb Raider." It was a very violent, brutal game that put one of gaming’s oldest heroines in some devastating situations. Within the first few seconds of controlling Lara, we’ve already struggled out of an upside-down binding and have landed hard – really hard – on an ugly metal stake puncturing all the way through our hip. Scenes like that can read as exploitative -- on the other hand, developer Crystal Dynamics finally allowed Lara Croft to build her own legacy. She became not a ridiculously proportioned, double-pistol wielding vixen, but a capable, if frightened, explorer attempting to salvage a really bad day. For the first time in her history, Lara Croft was a little bit human.

The Narrator, "The Stanley Parable"

I love the Narrator because he never sets any rules. You’re nothing in "The Stanley Parable," just a mindless cubicle drone following (or not following) the instructions of a distant, guiding, vaguely sinister voice. It’s funny, it’s charming, it’s even a little bit scary here and there. Mostly though, The Narrator serves as excellent commentary on the very nature of interactive entertainment. We’re always following someone’s command, even when we don’t want to.

I’ve written before about "Gone Home," and how it tells a remarkably touching story entirely out of contextual information. Its biggest triumph is Lonnie. You never meet her, you only hear her voice for a few moments on a lonely answering machine, but her essence is everywhere. Lonnie is the girl your teenaged sister falls in love with while you’ve been traveling abroad. When you return home, neither of them are anywhere to be found, but the fragments left behind tell everything you need to know. You pick up notes coated in her wild, giddily reckless handwriting, your sister talks about her grace and passion in her journal. You might stumble across the zines she printed in the basement, or the endless mixes taped in the attic. Despite never appearing on screen, she’s one of the biggest characters of the year.

"The Last of Us" gets chided for being the sort of big-budget, Spielberg-directed Oscar bait that tends to rack up plenty of critical buzz despite playing things kind of safe. With all due respect to those detractors, they couldn’t be further off base. Joel, the main character, is a grizzled, disturbed old man who’s simultaneously deeply sympathetic and utterly damnable, but the real star is Ellie. Has there ever been a teenaged girl so comprehensibly real? She’s funny, she’s bloodthirsty, she’s weary, she’s kind, she’s vulgar -- she comes from a broken world full of broken people, and still maintains a stubborn optimism. Zombie fiction has been done to death over the last few years, but I can’t think of someone who’s come out of that world better-rounded than Ellie. At this time and from this angle, she seems like a landmark character for video games.