My son is getting an American Girl Doll for Christmas

He loves dolls, and in our house toys aren't "for girls" or "for boys." Toy catalogs need to catch up 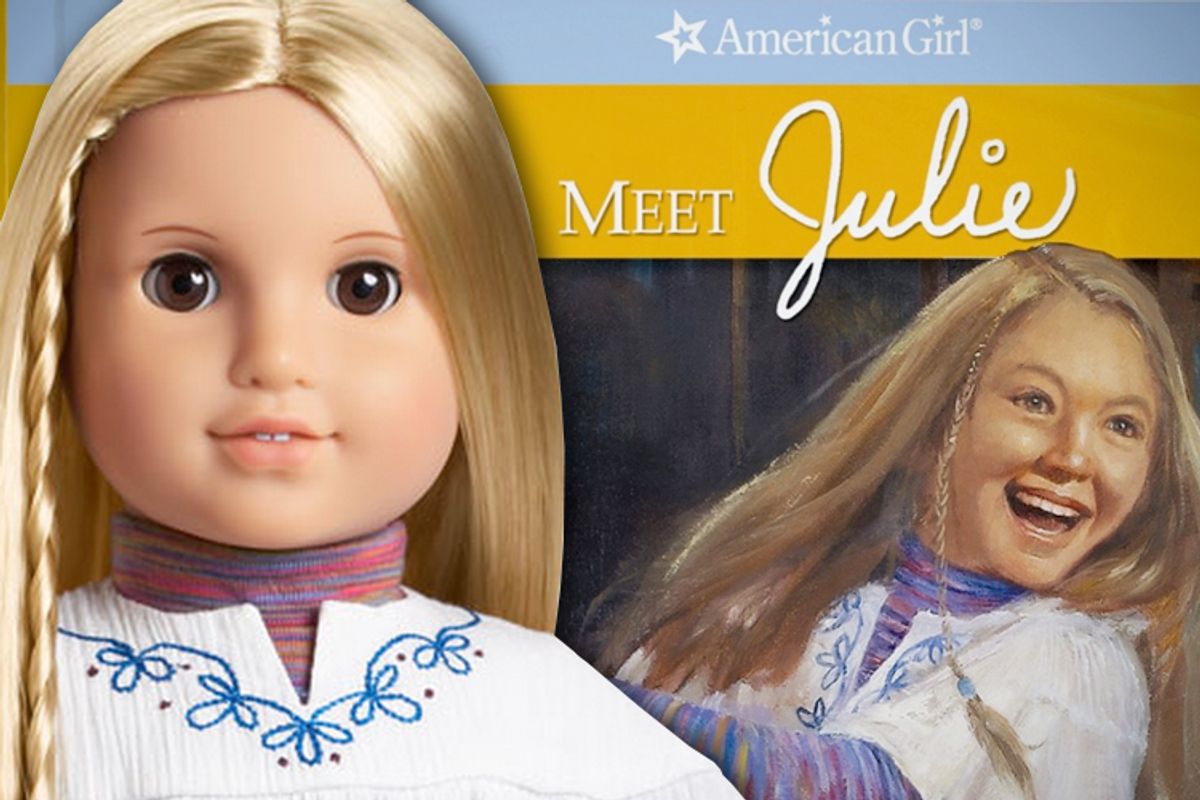 For more than half of his life, my son has preferred dolls, toys and clothes that are marketed to girls. It started when he was two and a half and he picked up a Barbie and refused to put her down. He’s gone through all of the toy phases that girls his age usually go through.  Barbie gave way to Disney Princesses gave way to My Little Pony gave way to Monster High.

My son is now almost 7 years old and I thought that our pocketbooks were going to luck out and that he was going to skip over the very pricey American Girl doll phase. I really thought we were in the clear. Then American Girl catalogs started arriving in our mailbox a few months ago in preparation for the holidays. He has memorized every page of every catalog and decided that he wants a $130 doll, an $85 gymnastics equipment set and a $350 bright-blue Volkswagen Beetle.

In the process of writing his Christmas list in his very best first-grade penmanship, he looked up from the catalogs and asked me a very serious question.

“How come there aren’t any boys in this catalog? Boys can play with American Girl dolls.”

“Then how come they don't have boys in here?"

I did know why; I just didn’t want to admit it to my son. The sight of boys playing with dolls makes people uncomfortable. When people are uncomfortable, they look away. If people look away from your catalog, your sales sag. Brands want customers, not controversy.

Toy catalogs in Europe have started to erase the gender lines that were once drawn for their merchandise. Now, girls play with toy weapons and trains. Boys play house and care for baby dolls.

That’s how it is in our house. Our children – both boys – are allowed to like the colors, clothing, toys and hobbies of their choice. Things aren’t “for girls” or “for boys.” Our children know that and appreciate that – and so do their friends who play free of gender policing at our house, but don’t enjoy the same freedom at home. But my sons see things differently in the pages of the toy catalogs of all major U.S. brands.

Society continues to see masculinity in female children as a strength and femininity in male children as a weakness. We ignore that up until the 1940s the color pink was for boys and blue was for girls; that doll play has been shown to help with language and social skills in all children and helps develop fine motor skills; and that men wearing skirts, long hair and strappy sandals go back to the time of Christ.

The images in the American Girl catalog don’t change my son’s desire for the doll named Julie. They don’t change the fact that she will be sitting under our tree on Christmas morning – sans her gymnastic equipment and car. But the absence of images and examples of boys thriving as they embrace supposedly feminine qualities is a disappointment and unfortunate.

We make a point to tell little girls that they can be anything they want to be: doctors, lawyers, scientists, engineers, president. But we shy away from giving little boys the same courtesy of unlimited potential. How often do we tell boys that they would make a wonderful primary caregiver parent, elementary school teacher, hairstylist, fashion designer, dancer, nurse, spouse of the president?

I wish we lived in that kind of world. I think we are moving in the right direction; I just wish we were moving a little faster.

I sat down at my computer to order Julie the American Girl. I entered my order, my shipping information, my billing information -- and then American Girl asked me about the girl for whom I was buying the doll. They wanted to know my daughter’s birthday. I don’t have a daughter. I have a son; a son who wants Julie for Christmas and who wants to see a boy playing with a doll in a catalog. Those are the two things that he wants most for Christmas. I can only give him one, and dream that maybe next year his second wish will come true.