The year's top 10, from Sarah Polley's family chronicle to "12 Years a Slave" to Scorsese's audacious comeback 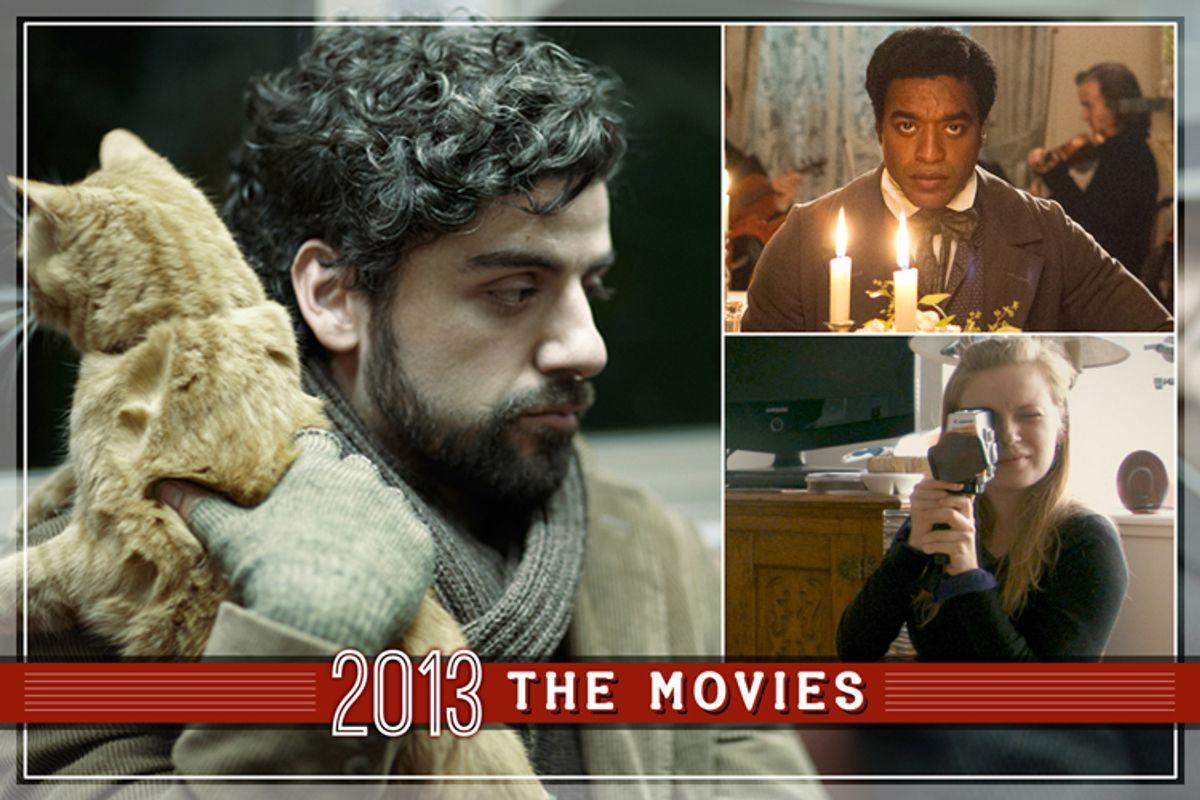 Everybody who writes about movies dreads making these lists, yet all of us want to read each other’s lists. Partly we’re looking for affirmation, partly we’re looking for ideas, and partly we’re looking for guidance on how to approach this strange exercise in subjectivity and perspective. I kept my movie-watching in 2013 to an almost human scale at roughly 175 films, about half the number I typically watched in the days of Salon’s “Beyond the Multiplex” column. (I know plenty of people in and around the film business who watch 450 to 500, or even more.) Even so, you wind up faced with ridiculous conundrums: How do I decide whether a contentious French drama about a love affair between two young women is better or worse than an absorbing and informative documentary set in Tahrir Square? Can’t we say they’re both terrific, and leave it at that?

Sure we could, but that would be cheating. I decided sit down one day in mid-December and make the list quickly, without much deliberation. I don’t fiddle with it for weeks and I don’t try to make guesses about historical importance or whatever; that won’t make me happier, and the odds that I’ll look at it six months or a year from now and think I screwed it up are pretty high in any case. Suffice it to say that what everybody says about 2013 is true: It’s been an explosive year for movies in general and especially for American cinema. We may be in the “post-theatrical” age but movies continue to play surprisingly widely on the big screen, even as more and more people watch them at home, on mobile devices or via brain implants. (OK, that technology’s not quite ready, but just you wait.)

The 10 movies on this list all moved me, challenged me, thrilled me and delighted me; I recommend them all without hesitation. The honorable-mention list (which I always stretch to 11 movies, because it’s my list and I can do what I want) tend toward the specialized, the eccentric and the offbeat. Every one of them — yes, including “Lee Daniels’ The Butler” — felt like a startling discovery, if maybe one that comes with an asterisk. Your favorite film totally isn’t here? I know the feeling; please educate me as to the glaring omissions.

1. "Stories We Tell" Canadian actress-turned-director Sarah Polley has sneakily become one of the best young filmmakers in North America, and this subtle, heartbreaking documentary proves it. Masquerading as a straightforward family memoir about Polley’s long-dead mother, “Stories We Tell” gradually becomes something else, an inquiry into the nature of memory and reality, a love letter to Polley’s English-born dad (who narrates the film), a puzzle box with unanswerable questions about how we become who we are at its center.

2. "12 Years a Slave" Unsettling and formally rigorous, Steve McQueen’s fact-based tale of a free black man sold into slavery in the 1850s puts America’s darkest secrets on screen for the first time. Yes, it’s sometimes a difficult film to watch, and lacks the blood-drenched fantasy retribution of Quentin Tarantino’s ludicrous “Django Unchained.” But the performances of Chiwetel Ejiofor, Michael Fassbender, Lupita Nyong’o, Benedict Cumberbatch and the rest of the stellar cast are so strong, the created 19th-century world so compelling and the filmmaking so confident and complicated that the experience is completely worth it.

3. "Inside Llewyn Davis" Simultaneously one of the Coen brothers’ most mysterious films and one of their most accessible. Little-known Oscar Isaac zooms toward stardom as the eponymous Llewyn, a talented folk-singer in 1961 Greenwich Village who’s on the verge of making it — or screwing everything up. Justin Timberlake sings “Please Mr. Kennedy,” Carey Mulligan curses a blue streak and John Goodman is at his ogre-like best when this immensely evocative, shaggy-cat saga goes on an allegorical road trip.

4. "Ain’t Them Bodies Saints" Rooney Mara and Casey Affleck are a doomed pair of Bonnie-and-Clyde lovers in 1970s Texas in this mesmerizing, mythological crime saga from fast-rising director David Lowery. Magnificently shot by Bradford Young and unforgettably scored by Daniel Hart, “Ain’t Them Bodies Saints” has the fatalism of a classic country song and the spiritual undertow of Tolstoy or Tarkovsky. (And yes, it was influenced by Terrence Malick’s “Badlands.” You got some problem with that?)

5. "Blue Is the Warmest Color" Debate over French director Abdellatif Kechiche’s magnificent 21st-century love story got derailed first by everyone’s obsession with the film’s intensely graphic nine-minute lesbian sex scene, and then by actress Léa Seydoux’s feud with Kechiche over his reputed tyrannical style. First-time actress Adèle Exarchopoulos (the movie's big discovery) got caught in the middle of all this; about the only thing all three agree on is that they made a sensational film, one that’s not about sex but about love and loss and possibility and European life in a new millennium.

6. "The Great Beauty" Director Paolo Sorrentino and actor Toni Servillo, the team behind the eye-popping “Il Divo,” are back with another hallucinatory odyssey into the soul of modern Italy. Servillo plays a debauched Roman journalist named Jep Gambardella, a ladykilling aesthete who celebrates his 65th birthday amid the glorious, cynical wreckage of the Eternal City in the postmodern age. An unforgettable visual and auditory experience; just let go of your desire to understand it all.

7. "The Square" Arab-American documentarian Jehane Noujaim spent most of two years documenting the protests and counter-protests of Tahrir Square, meeting secular feminists, mainstream liberals and Islamic fundamentalists. The resulting film puts us on the ground in Cairo's historic center, amid a rolling climate of social turmoil that may determine the future of the Middle East and the world. One of the truly urgent viewing experiences of the year.

8. "The Invisible Woman" Sure, Ralph Fiennes is one of the most acclaimed British stage and screen actors of our time — he’s played Voldemort! He’s played Hamlet! — but his directorial efforts have failed to make an impression on either critics or the public. Well, that’s crazy and I’m here to undo it. Fiennes’ “Coriolanus” was one of the best Shakespeare adaptations of recent years, and “The Invisible Woman,” with Fiennes as Charles Dickens, opposite the magnificent Felicity Jones as Nelly, the author’s much younger mistress, is a perfectly executed work of historical revisionism, hard-edged, heartbreaking and utterly convincing. (It opened Christmas Day in limited release, with wider national release to follow in 2014.)

9. "Her" You never see Scarlett Johansson on screen in “Her,” but it’s no mystery that Theo, the tormented and introverted geek played so marvelously by Joaquin Phoenix, falls for her so hard. Johansson’s Samantha is sexy, open-hearted, sympathetic, witty and loving. Oh, she’s also the operating system on Theo’s computer, in Spike Jonze’s alternately wistful and whimsical near-future rom-com, a lovely and slightly troubling vision of utopia as designed by Marshall McLuhan and Ralph Waldo Emerson.

10. "The Wolf of Wall Street" Martin Scorsese is back — not that he ever went anywhere — and Leonardo DiCaprio gives his greatest screen performance in this Gatsby-update parable based on the true story of penny-stock zillionaire Jordan Belfort, a robber baron of the Clinton years. This deliriously and deliciously vulgar tale of the American dream realized is loaded with cocaine, hookers and wretched excess of all kinds, with cinematic verve to match, all of it unleavened by any moralistic messages about crime and punishment.

HONORABLE MENTION: Toby Jones plays a mousy English sound engineer hired to do effects for a legendary Italian horror director in Peter Strickland’s deeply strange and original "Berberian Sound Studio"; ultra-indie legend Andrew Bujalski used actual 1980s video technology to make his surrealistic faux-documentary "Computer Chess"; Robin Weigert goes from lesbian housewife to lesbian hooker in first-time director Stacie Passon’s merciless social satire “Concussion”; a true-life tragedy forms the basis for an intriguing study of American possibility in Ryan Coogler’s “Fruitvale Station”; if you want to learn about the relationship between international shipping and Somali piracy, skip “Captain Phillips” and see the crackling Danish thriller “A Hijacking”; though overloaded with schmaltz and sentiment, “Lee Daniels’ The Butler” packs a historical and emotional wallop; Mexican art-film god Carlos Reygadas goes autobiographical in the dreamlike, unforgettable and deeply NSFW “Post Tenebras Lux”; explore the mysteries of Stanley Kubrick’s “The Shining,” and all the nutty theories around it, in “Room 237”; Clio Barnard’s “The Selfish Giant” is an instant classic of heartbreaking British neo-realism; hit the road with disgruntled ‘70s Euro-leftists in Olivier Assayas’ gorgeous, despairing “Something in the Air”; James Franco and Harmony Korine live Sunshine State life to the fullest in “Spring Breakers,” and why y’all actin’ spicious?