Some say modernity killed the rom-com, but movies like "Enough Said" prove the genre's alive and well in 2013 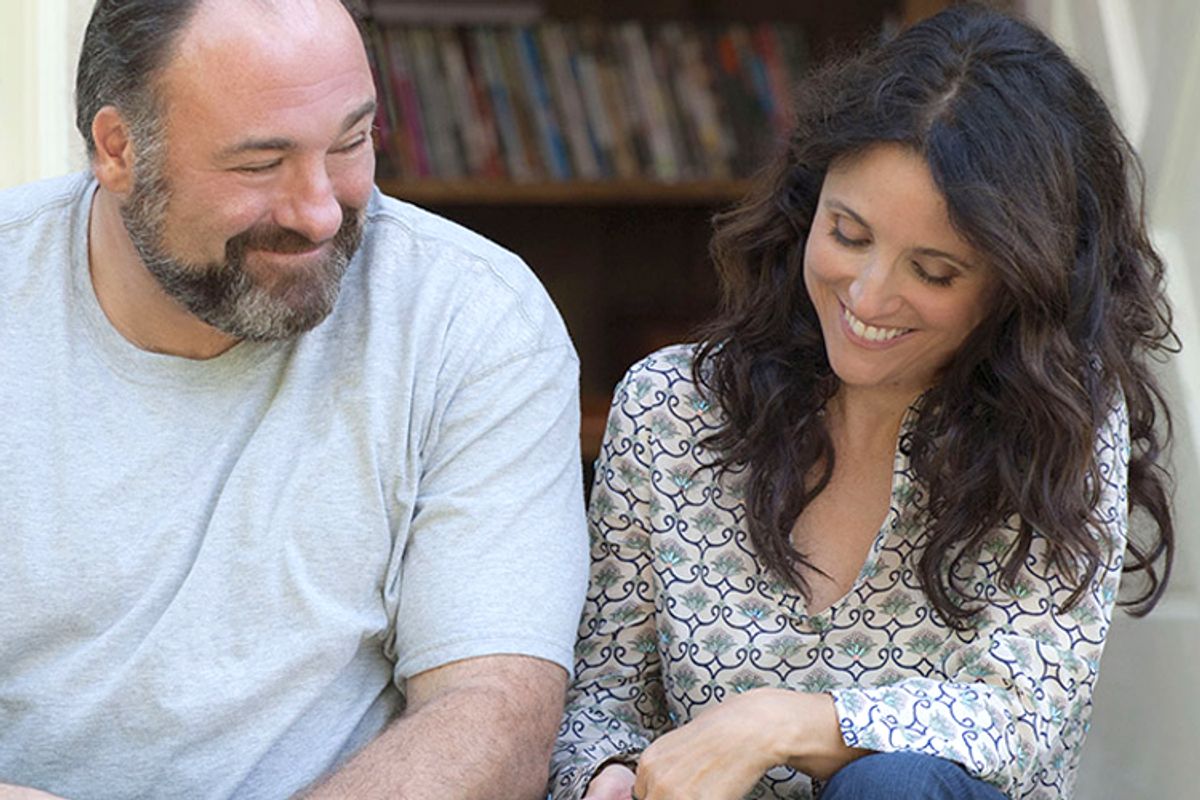 Contemporary romantic comedies make for an easy punching bag. This is evidenced by the fervor with which critics chomp at the bit when given the opportunity to decry "Love Actually" as an unromantic bit of poppycock or bemoan Katherine Heigl and Kate Hudson’s inability to replicate the screen magic of past Hollywood luminaries like Katherine and Aubrey Hepburn. And while it’s hard to find fault with impassioned critiques of awful pictures like "The Ugly Truth" or "How to Lose a Guy In 10 Days," that doesn’t mean Hollywood lacks the wherewithal to churn out good romantic comedies in this day and age. In fact, 2013 saw the release of several excellent romantic comedies, which creatively pushed the boundaries of what even at its best can be a somewhat staid genre. These films may not have broken box office records or generated the mass hype and excitement which accompany every new comic book film, but those shortcomings don’t diminish their achievements.

Let’s start with the excellent "Enough Said," Nicole Holofcener’s film about two divorcees in Los Angeles who test out the dating waters and find many surprises, both good and bad, in the process. The protagonist of "Enough Said" is Eva (Julia Louis-Dreyfus), a divorced mom who dreads her daughter’s impending departure for college and the loneliness it will precipitate. Eva’s fortunes take a turn for the better when she meets Albert (James Gandolfini), an overweight, somewhat slovenly television archivist. Though Albert is not exactly Eva’s “type,” she’s surprised by how much she enjoys his company. The two bond over a shared fondness for witty banter that comes across as natural and charming as opposed to trite and forced. Their attraction grows when they consummate their budding relationship in bed, and for a moment it seems as if the two have made a match made in middle-aged heaven.

The obstacle standing in the way of the new couple’s continued happiness, a plot staple of any good romantic comedy, is Albert’s ex-wife Marianne (Catherine Keener.) Eva unknowingly befriends Marianne when she begins dating Albert. Though the two women seem to have little in common, Eva can’t help but be awed by Marianne’s stature — she’s a renowned poet who receives personal correspondence from Joni Mitchell — and reverts to a teenage mindset when around her, behaving like the nerdy girl who swoons when the prom queen chooses to acknowledge her existence. Eva realizes the connection between Marianne and Albert just when Marianne begins opening up to Eva about her ex-husband, a process that entails talking trash about Albert and all his shortcomings. Rather than stand up for her new beau or even disclose that she is now dating her new friend’s ex-husband, she allows Marianne’s perspective to influence her perception of Albert. Eva also refuses to tell Albert that she’s spending time with his ex-wife. This deception leads to a scene that could have been cribbed from a classic screwball comedy in which the three end up in the same room together, Eva in the middle trying to explain herself to the two people she’s kept in the dark.

"Enough Said" is the most refreshing romantic comedy to hit theaters in years. Though the tricky landscape of middle-aged dating is the film’s primary terrain, the truths it communicates about romance and the unpredictable nature of attraction are applicable to all age groups. The film exudes a warm energy so often missing from a movie landscape filled with reboots, remakes and comic book films.

The second remarkable romantic comedy of the year is "Don Jon," the first feature film directed by Joseph Gordon-Levitt. Though some might argue "Don Jon" does not quite fit the requirements for categorization in the romantic comedy canon, the film has all the markings — a romance at the heart of the plot, obstacles to nuptial bliss, a love triangle — of one. It even has some fun at the genre’s expense: The film’s main female character Barbara (Scarlett Johansson) is an unabashed fan of romantic comedies while the protagonist Jon (Gordon-Levitt), with whom the audience is clearly meant to identify, abhors them. In spite of their differing tastes in film, Jon and Barbara start a romance that seems precarious from the start. She wants to date a career striver; he has no problem continuing to tend bar. They even argue over the preferable methods for cleaning an apartment, and the entire relationship seems to hinge on both characters' desperate need to possess a piece of arm candy from the opposite sex, rather than to experience any sort of real, human connection.

But the film’s central premise is far more interesting than any of these details. It asks if it’s possible in a world where gobs of Internet porn are available at the click of a mouse for a man to find satisfaction in an authentic relationship. That’s a difficult question to answer but in posing it, "Don Jon" expands the list of possible conflicts for contemporary romantic comedies to explore. In an essay in "The Atlantic," Christopher Orr argued that the awful nature of contemporary romantic comedies has as much to do with changing social mores as the film industry, in that obstacles to romance in the present day are not nearly as prevalent as they were in the 1930s and 40s. Premarital sex is no longer frowned upon and relationships that match individuals from different socioeconomic backgrounds or “different sides of the tracks” are no longer as problematic as they once were. Even geographic boundaries seem less challenging with up-to-date communication technology keeping us always connected. Orr suggested this is the reason why the writers of romantic comedies have stooped to ridiculous gimmicks, like matching ghosts with living human beings or making the female protagonist the daughter of the president, premises that inevitably lead to terrible filmmaking.

"The Spectacular Now" rounds out this year’s solid offering of romantic comedies. Though the two main characters are high school seniors, the film has more in common with adult romances than typical high school fare like "American Pie" and "Fast Times at Ridgemont High." The story focuses on the relationship perils faced by atypically matched teens as they transition from adolescence to young adulthood. Sutter Keely (Miles Teller) is an affable slacker with a budding drinking problem and no plans for the future. He prefers to live in the now and sees adulthood as an unappealing proposition. His brainiac girlfriend Aimee (Shailene Woodley) is preparing for college in Philadelphia and wants him to come with her, a path Sutter’s insecurities prevent him from taking seriously.

In spite of the cherub-faced actors who play the two leads and set-pieces including a high school dance and keg party near the river, "The Spectacular Now" feels incredibly mature. Hereditary alcoholism, parents who can’t stand on their own two feet and the extreme consequences of seemingly everyday life decisions permeate the film, giving it wisdom far beyond the years of its protagonists. It’s the heir to "Say Anything."

Three good romantic comedies do not necessarily constitute a trend, and one fears that next year Hollywood will revert to its old habits. If such a bleak future does come to fruition, however, we have only the screenwriters, directors and studios to blame. "Enough Said," "Don Jon" and "The Spectacular Now" proved there are, in fact, interesting narrative set-ups on which to stage 21st century romances. So let’s hope Hollywood took notice of these films, and that others follow in their creative footsteps.