Where that Christmas feast really came from 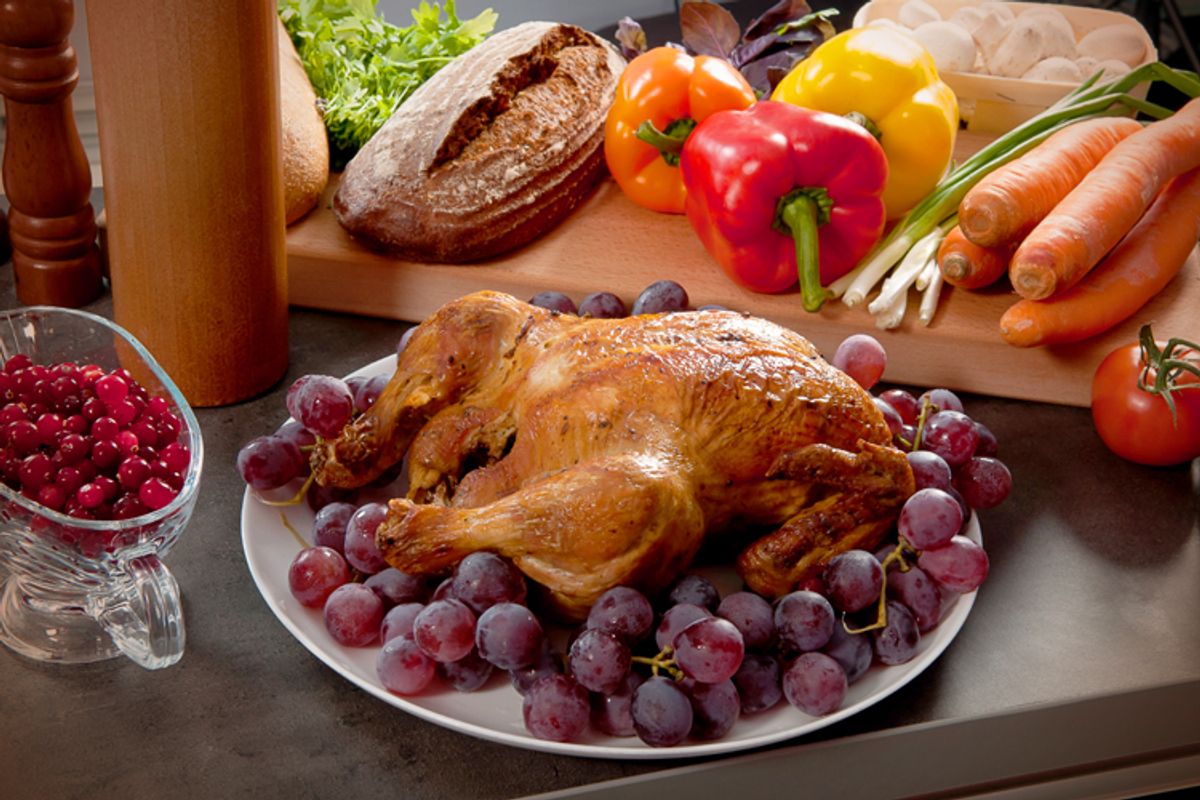 A former chef in the Seattle food scene turned small-scale dairy farmer, Kurt Timmermeister is in a better place than most to set the record straight about where our food comes from. He grows his own vegetables, slaughters his own meat, even roasts his own coffee beans — and for five years, he profited from doing so, hosting weekly farm-to-table meals for small, exclusive groups of guests.

Growing a Feast, Timmermeister's second book, tells the story of one such meal, made entirely of ingredients from his farm. The saga begins a full two years before the feast in question, with the birth of a future dairy cow, and progresses through the months of labor that made its many courses possible. It's the story, in other words, of how food gets to the table, in far more detail than most of us are likely to have seen for ourselves. In many ways, it's a beautiful story — but it's nowhere near as idyllic as people make it out to be, he said.

Timmermeister spoke with Salon about the romanticism, real and imagined, of a life dedicated to growing food, and about why the world needs more of its best and brightest to return to the farm. This interview has been lightly edited and condensed.

What inspired the idea for you — first to serve this extremely local meal for visitors, then to tell its origin story?

I needed a way to pay the bills. I had been to this place in Portland years before, run by Michael Hebb and Naomi Pomeroy — it has since closed — that was doing a private dinner club, and I thought it was really intriguing. It sounds kind of funny now, in 2013, but at the time nobody was doing what they were doing, where it was private, you had to be on an email list, you didn’t know what was going to be for dinner, there were no menus and you were going to sit at a community table — it’s now hysterical that that was unheard of, but it was. A private dining club was this crazy idea, and I was so excited about it.

I wanted to do it here at the farm, and I realized I was making great food, so why didn’t I try and make everything for the dinner from what we grew here? It seems very obvious now, but at the time it seemed kind of like a crazy idea. Once I ended it, I realized that it was something special, and it was something interesting, and that it had become very commonplace to me: of course you grow all your own food, and of course you make extravagant meals. But I realized it wasn’t commonplace to other people, and that it would be a beautiful story to tell people of where food comes from.

The idea of connecting with your food is something that’s really touching a nerve right now — what is it about going to the farm and seeing where their food comes from that appeals so strongly to people?

I want to believe that we’ve always wanted that connection, but we weren’t allowed to for so long. Now we’re able to — you can figure out where the pork comes from. I think we want some story in our life. We want to know about what’s going on around us, we want to be participants in our lives. We don’t want to just eat what’s in front of us — we want to decide what we’re going to eat, and we want to eat well. We now know what bad food is, so I think we very much want to know what great food is.

Do you find that the people who came to your meals romanticize farm life, and the idea of local food?

Yes, [laughs] it’s actually kind of a problem. I did, so that’s the first thing. I’m as guilty as anyone. When I quit my job and first started doing this, I had a very romantic notion of it. It was very, very quickly dispelled. I didn’t have any employees, at the beginning. And I had cows, and there was all this manure and mud, and it was winter. They were dairy cows, which are the hardest, because you can’t quit. There can be a foot of snow out there, and it’s Christmas Eve — it absolutely doesn’t matter. You still have to go out there and bring the cows into the barn, and milk them and feed them and water them. You just have to. It’s kind of a trial by fire: you can’t say, “Oh, I don’t really think this is as cute as I thought it would be.” There’s no way of stopping it.

But people have a very romanticized notion of it. The dilemma for me is that I perpetuate it, also. I write books that describe the romantic nature of it in many ways, so I’m guilty of keeping that myth going. But I try to push it, always, as well. Especially with meat. When I was doing the dinners for customers, I’d be very clear: “We’re having beef for dinner: This was a calf named Jesus, it was slaughtered a month ago, then we hung it for 14 days, and now we’re roasting it up and we have this beautiful dinner.” Some people really didn’t like that. And I don’t care.

That’s definitely the part of the book that’s hardest to read.

I want to be incredibly clear: I think you should enjoy this beef roast, I think it’s really good, and it was an animal a month ago. We killed it just so we can have this lovely dinner. You need to be aware of that. So I won’t gloss over those bits at all. But this farm is very pretty. It always looks very good, and so people can easily fall for that.

The hardest part is when it comes to my personal life. I will meet people and they’re like, “I love your life and I want it because it’s so fabulous.” And I’m like, “It’s a life just like yours, except that there’s cows outside of my window and not an office building.” They think that because it’s visually very pretty out here, and the food is very tasty, that therefore I’m happy every day.

You mean you’re not?!

No! I have a very real life, and it’s very hard for people to understand that. I no longer really argue with people about that, but I used to confront them and be like, “No, actually, I had a shitty morning today.” And they’re like, “No you didn’t. You got to wake up with the cows and that’s glorious.”

In the book you write: “There is a current trend in food to obsess over the heirloom nature of a plant or animal or process ... Little thought goes into this aggrandizing of varieties beyond the sense of ‘things were better in the past.’” Can you explain a bit more of your thoughts about that?

That’s a big one for me. I’ve seen a fair number of small farms. Some of them are gorgeous and produce amazing food. I’ve also seen an equal number of small farms that are disgusting, and produce wretched food that they then sell at the farmer’s market. The lesson I take from those things is to have a discerning eye about everything. If it’s a good tomato, it’s a good tomato — I don’t care if it’s heirloom or hybrid. Small is not better, large is not inherently bad. Old is not inherently good, and new is not inherently bad. Good things are great, you know? And bad things are bad. I don’t care where they come from.

I don’t romanticize the past much at all. I love a very modern world. If I can pick and choose things from the past, I certainly will, but I just don’t like the blanket statements of “anything old is good” or “any heirloom is good.” Because some aren’t.

How do you feel about GMOS as one of those modern innovations? That’s definitely a sticking point where you are.

And it got voted down! I was shocked.

The first thing I would say is that I doubt one percent of the population could actually tell me what a GMO is. If you really can explain it to me, and why it’s harmful or beneficial — I think a lot of it is described in this kind of superficial manner.

The labeling, which is what was on the ballot here in Washington and somehow failed — I voted yes for it, because I thought any information is good. But what I wanted, kind of flippantly, for labels to say was: “This can of Progresso soup does not have GMO product in it, but the people who picked the beans for it were paid $6 an hour, and they live below poverty, and the chicken in it was raised in these conditions, and it was killed, and its flesh was mechanically taken off so that you can enjoy your soup.” I want all that information: you’re eating meat; the soil was ruined because of these green beans in here; the people who work there make no money. All that information is interesting to me. The GMO is probably the least worrisome to me; I value more the other parts of the story.

I’d love to talk more about this need for educated people to go back to manual labor by becoming small farmers. How much of farming is just physical labor, and how much of it really requires that creativity and innovation from people coming into it?

It depends on what scale of a farm it is, and what product it is, and so on. We do physical labor here every day, although I do very little of it anymore. I for better or worse spend a fair amount of my day answering emails, and this is not really what I ever had in mind. So it’s not a job that’s one hundred percent manual labor. But it’s certainly not zero — I can see out my window here and they’re bringing the cows down already for the evening milking, so there is certainly labor to be done.

I think we certainly need innovative people doing part of that work. And that would change the business. It is a feat, if you will, that I have managed to make this very small farm — 13 acres, which is huge, but it’s tiny, also — I’ve managed to make this profitable. And very few people pull this off. I mean, it’s pretty rare. To make a product from a not-large piece of land that’s not really extraordinary farmland, and make a great product that ships all over the country and is very well-known and regarded — it’s because I’m innovative and good at marketing and creative and so on. If it had just been a regular dairy farmer here, he would have long since gone bankrupt. So yes, we need the most creative and innovative people running farms.

In regards to Ben, who works for me — I mean, he went to Cornell. He has this extraordinary degree that is valuable, and is very well-educated and very smart, and he’s clearing the manure off the pad in the barn once a week too. It’s like, as a culture, is that how we should use that human and his skills? I don’t necessarily think so. It seems kind of wasteful, as a society, to do that. But for certain parts of this kind of resurgence of small farms, it’s really very necessary. It’s what will change the country, I think.