The year music videos made a comeback 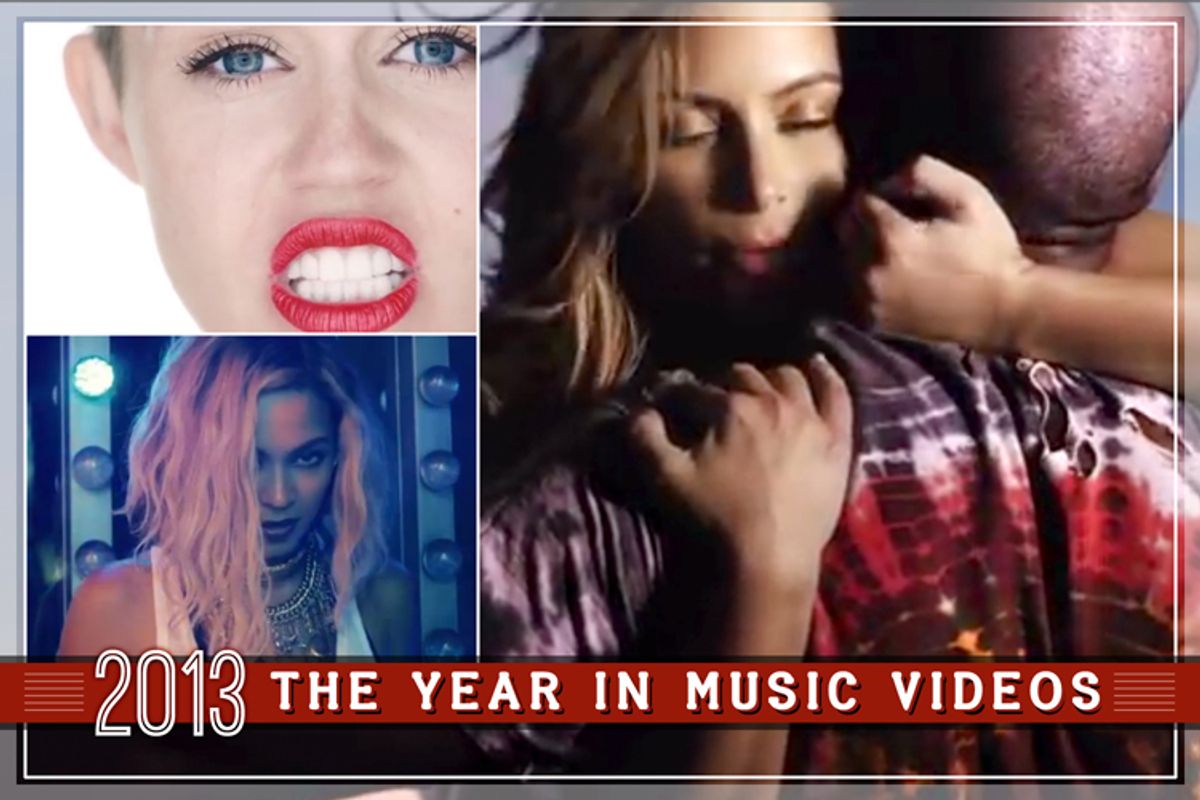 For years in the early- to mid-2000s, music videos were declining in importance -- with MTV moving more and more away from a video format and streaming video not yet a part of the Internet, they looked like an endangered species. These were the years when a declining-in-influence "T.R.L." would play 30-second snippets of music videos so unimaginative as to be not even worth that much time, post-Madonna's peak but before the rise of Beyoncé. MTV gave Video Music Award nominations to artists who'd never consistently make it onto their air (Johnny Cash, the White Stripes, Fatboy Slim) in the early 2000s, simply because there weren't enough people doing interesting things with the medium to fill out a category.

Who would have guessed that the music video would become the most vital sort of art in 2013? The year's two most resonant single cultural moments both revolved around music videos. At the Video Music Awards this summer, Miley Cyrus's twerking on Robin Thicke was in fact an homage to his "Blurred Lines" video, which had been a smash online; her dancing at the beginning of the performance and the general aesthetic was directly taken from her "We Can't Stop" video. And Beyoncé's recent album drop was so striking in part because it included a music video for every song; part of the reason one had to buy it as soon as possible was to experience the visuals for each track.

Cyrus and Beyoncé, in very different ways, proved that the music video matters. In Cyrus's case, she was able to advance, through a consistent visual aesthetic, her new persona as a sexually frank and drug-using twentysomething; in Beyoncé's case, she put forward a diverse slate of videos with entirely different looks and dance moves.

Thanks to YouTube and sites like it, music fans no longer need to wait for MTV to broadcast videos in order to see their favorite artist's clip. Indeed, placing the power to choose what to watch in the hands of the viewer, rather than that of an MTV producer with relationships to artists and labels, has meaningfully changed the game. Music-video streams online now count toward a song's chart success -- this is how "Wrecking Ball," whose video features Miley Cyrus, nude, atop the titular destruction device, became the singer's first number-one. So an anodyne video is hardly worth making at all. Look at the case of Katy Perry, whose "Prism" album release has been burdened with dull videos with whiplash-inducing changes in persona. In the "Roar" video, Perry is a jungle goddess; in "Unconditionally," she's in a sort of "Dangerous Liaisons" milieu. Why? She fully commits to neither.

By comparison, there's Rihanna, who released no new music this year but did drop a video for "Pour It Up" that briefly set the Internet ablaze as she, perhaps in response to Cyrus, twerked in a throne. This was less artful than purposefully provocative, a line Kanye West straddled in his pop-art masterpiece "Bound 2," in which he and fiancée Kim Kardashian rode a motorcycle through a self-consciously stagy green-screen landscape.

As a statement on celebrity, self-indulgence, and what it means to be in love, the video for "Bound 2" was powerful stuff; West put together the entire thing to showcase his beautiful fiancée, but couldn't restrain himself or make something that wasn't brash and tasteless. It's remarkable! And, though it'd be unlikely to play on MTV ever (the single it's promoting wasn't a major hit, and Kardashian's nudity makes it not really safe for the airwaves), the video, watched on loop at home, adds a dimension one couldn't possibly have gotten from the song alone.

Culture has moved closer and closer to a series of trending topics over the course of the Internet era; unlike songs, which can only do so much that is new while still relying on standard tools of songcraft, videos can go in any direction. They're also explicit where songs are metaphorical or open to interpretation; the beauty-pageant metaphor in Beyoncé's "Pretty Hurts" video, for instance, is a bit on-the-nose, but as the New York Times points out, it also lends itself to images tailor-made to be shared on social media. In an era when so little is lasting, a poorly-done video relying on shock value is the perfect sort of meme. You watch and are agog and share it with a pithy comment. And a well-done music video, like those Beyoncé toiled away on in secret, can do the impossible to an ostensibly sophisticated audience -- it can impress them.