Fights, meltdowns and Donald Trump -- our picks for the best of the worst 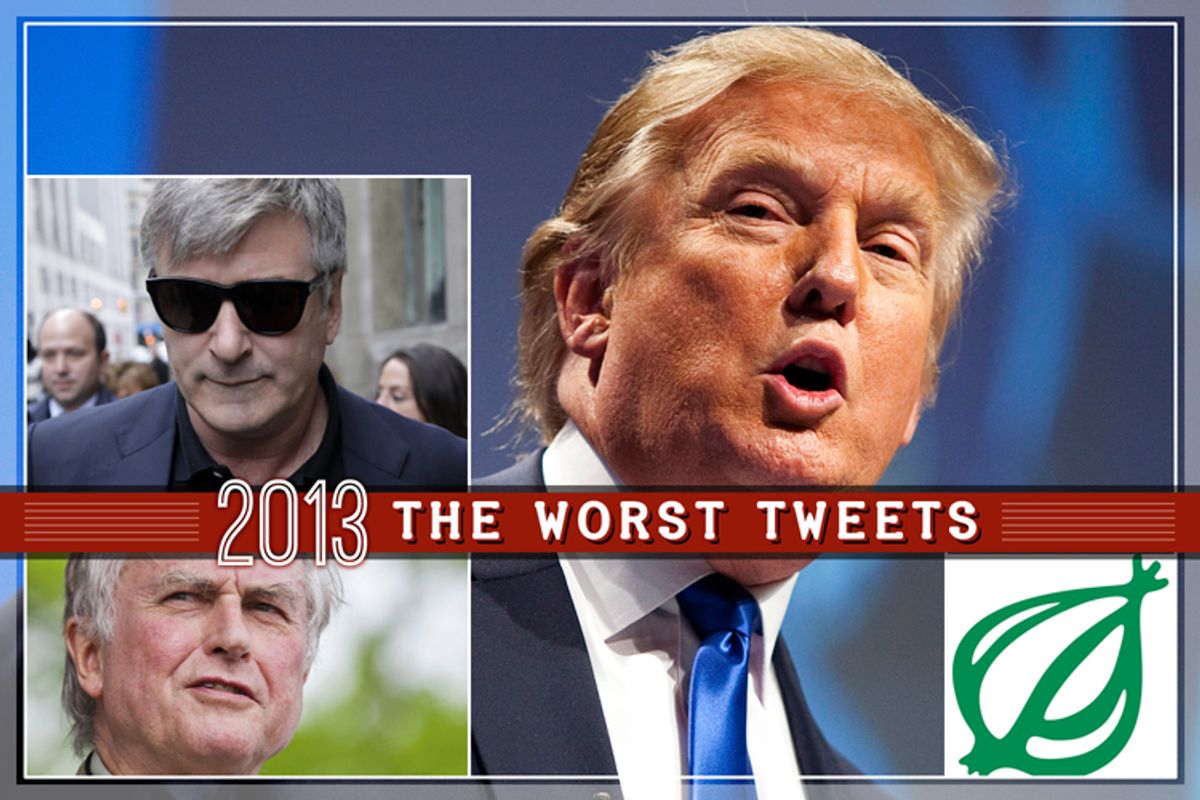 Picking out the worst tweets of the year is like picking out the prettiest snowflake. There are just too many to see, let alone single out. And in a year crowded with the likes of Geraldo Rivera and Amanda Bynes and Kenneth Cole, it was hard to choose. But for their sheer inanity, hastiness or just plain crabbiness, we've got to give a big hand to those who really went beyond the call of duty this year, revealing so much in so few characters.

A late entry in the year's competition, but a powerful one. While heading off on a December trip, the PR exec, who has subsequently "parted ways" with her employer, tweeted, "Going to Africa. Hope I don't get AIDS. Just kidding. I'm white!" That she could be so horribly wrong and then so unsatisfyingly unavailable for the duration of an international flight led to an inevitable #hasjustinelanded hashtag Twitter storm. It also caused a fury of Internet rage, a deleted tweet and an apology "for the pain I caused." One upside -- some clever person registered justinesacco.com -- and had it redirect to Aid for Africa.

The author and professional fly in the ointment of religion had faint praise for Islam in August, when he dryly noted the religion's poor showing in the Nobels. Gosh, if only the whole system of faith were built on prize winning, it might have been a real burn.

All the world's Muslims have fewer Nobel Prizes than Trinity College, Cambridge. They did great things in the Middle Ages, though.

The Republican representative for Texas's 36th congressional district is very, very angry, very, very often. He calls "Obamacare less popular than Chlamydia" and uses his Twitter feed to sell bumper stickers that say, "If babies had guns, they wouldn’t be aborted." In short, he's a veritable geyser of awful commentary.

Maybe he was just tired of all the attention BatKid got. In December, the TV writer cracked about sick children – comedy gold! And for what it's worth, joke writers, a child doesn't have to be terminally ill to qualify for Make-A-Wish.

I'm all for Make-A-Wish as long as they can guarantee the kid won't pull through at the last minute. — Gary Janetti (@GaryJanetti) December 8, 2013

When late-night host Jimmy Kimmel poked fun of West on his show in September, the rapper went into full caps-lock mode, ranting, "JIMMY KIMMEL PUT YOURSELF IN MY SHOES … OH NO THAT MEANS YOU WOULD HAVE GOTTEN TOO MUCH GOOD PUSSY IN YOUR LIFE…" and "YOU CAN’T PUT YOURSELF IN MY SHOES. YOUR FACE LOOKS CRAZY… IS THAT FUNNY?… OR IF I HAD A KID SAY IT WOULD IT BE FUNNY???" and telling him he resembled SpongeBob. Naturally the whole thing ended with Kanye doing much deleting, guesting on Kimmel's show, and warning him, "You shoulda saw the second set of tweets!"

In one of the summer's strangest meltdowns, a man who built his reputation as a "male feminist" – and who'd announced just days before he was going offline to get away from the "toxicity of take-down culture" -- had what he called an "episode," posting dozens of tweets in which he detailed how he'd "hurt so many people with lies." Though Schwyzer called himself "a reminder of what [the] manipulative mentally ill can do," his saddest revelation of all was the weary observation about his own infamy.

The Onion vs. Quvenzhané Wallis

On Oscar night, the usually brilliant humor site belly flopped badly by remarking of the 9-year-old Best Actress nominee, "Everyone else seems afraid to say it, but that Quvenzhané Wallis is kind of a c--t, right?" Even Onion fans weren't amused. The post was quickly deleted, and the company CEO called it a "senseless, humorless comment masquerading as satire."

This is not how you remember Pearl Harbor – with an anthropomorphized piece of canned pasta. But tell that to the clueless soul who was at the Twitter wheel December 7, when the brand did exactly that, advising, "Take a moment to remember #PearlHarbor with us" and featuring its jaunty, orange-sneakered mascot waving a flag. Though the tweet was quickly yanked, the most troubling mystery of the whole controversy is the lingering question as to why SpaghettiOs has almost 13,000 twitter followers.

It hasn't been a great year for the impulse-control-challenged former "30 Rock" star and short-lived MSNBC host. In April, incensed that a reporter suggested Baldwin's wife had been tweeting during James Gandolfini’s funeral, he raged about the "little bitch" and "toxic little queen" and warned he'd like to put his foot in one of the writer's orifices -- except that he worried "You'd dig it too much." Unsurprisingly, Baldwin deleted the entire sputtering mess soon after.

The reliably toxic professional troll capped off America's summer of racially explosive ugliness in August by declaring that "I am thankful this week that America is big enough and great enough to survive grown-up Trayvon Martin in the White House!" He must have changed his mind about his gratitude though – he deleted the tweet soon after.

It's always hard to pick just one incident of the Donald being utterly nonsensical on Twitter, but there's got to be a special prize for his entirely predictable tinfoil-hatted reaction to the December death of Loretta Fuddy.

How amazing, the State Health Director who verified copies of Obama’s “birth certificate” died in plane crash today. All others lived

On the historic day DOMA was overturned, the Director of Issues Analysis for the American Family Association expressed the deep fear of homophobes everywhere. It was almost too hilariously ridiculous to offend. Almost. Happy new year, tweeters. And sodomy-based marriage for all!

Sodomy-based marriage is an egregious violation of the "Laws of Nature and Nature's God." May God have mercy on us.