One photographer's mission to change the way we look at animals 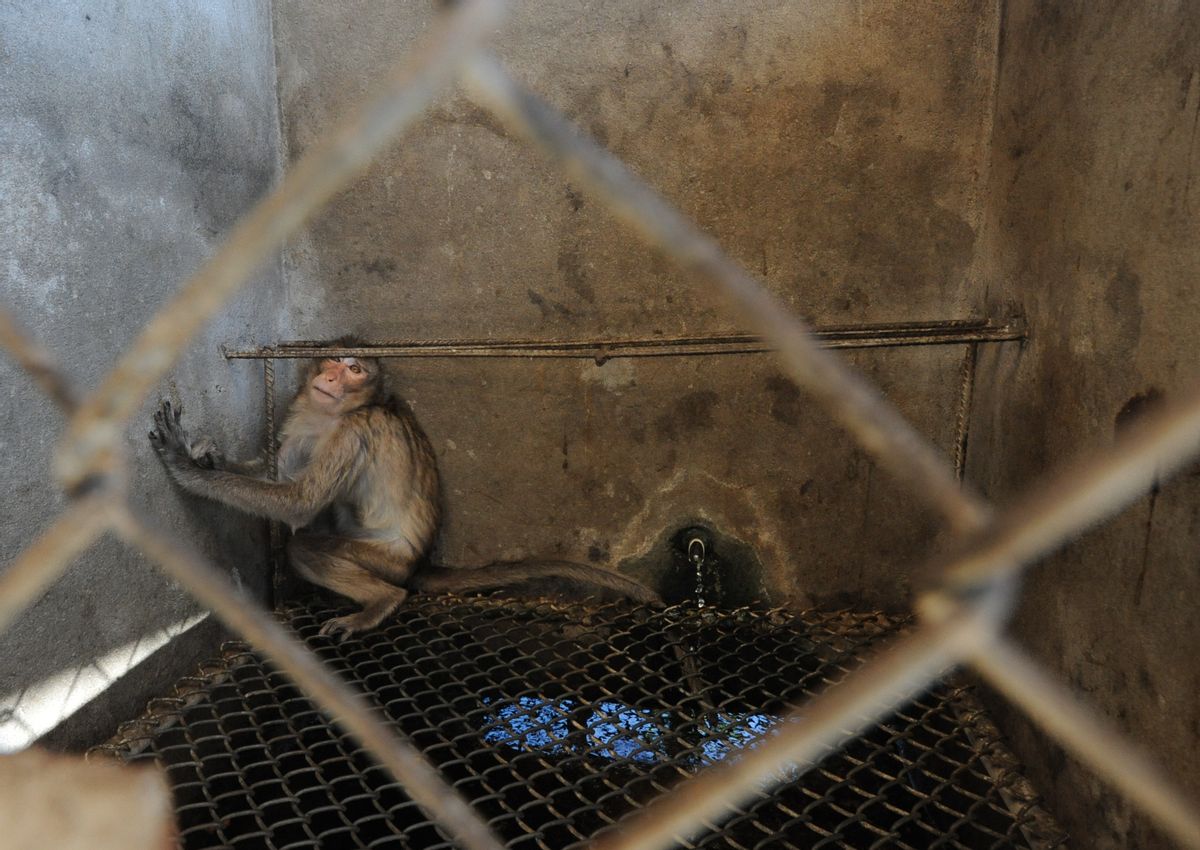 A terrified macaque at a monkey breeding farm in Laos attempts to hide behind a small metal rod inside his cage. (Jo-Anne McArthur/We Animals)
--

Most people don't see animals the way Jo-Anne McArthur does. Be they lab rats, meat for the slaughter or wild animals trained to perform tricks for an audience, they are, in her eyes, victims of our "common disregard for non-human animals."

An award-winning photojournalist and activist, McArthur has dedicated her career to making others see things the way she does, documenting abuse and aggravating for change. Her work, she has said, does aim to shock and disturb her audience, but it also strives to do something deeper: "to break down the mental and physical barriers we’ve built that allow us to treat our fellow creatures as objects and not as sentient beings."

"We Animals," McArthur's first book, compiles 100 of her most striking photographs, along with the stories behind them. She shared some of her reflections, along with a collection of her work (below) with Salon. This interview has been lightly edited for space and clarity.

The book is a culmination of over a decade of work photographing animals, across many countries and industries. When you originally set out to do this work, did you have a specific goal you were trying to achieve?

I’m not much of a goal-setter, but what I have is an insatiable curiosity and that has propelled the We Animals project since I conceived of it in about 1998. I was in Ecuador in the summer of that year and I noticed a macaque monkey tied to a window sill; he could neither get in or out of the barred window, and passersby were taking photos of him because they found this cute and entertaining. I took photos because I was appalled and wanted others to see what I saw. You could say the project began around that time; I knew that the way I saw our treatment of animals was important, and I wanted to share that point of view.

How do some of the norms surrounding how we treat animals differ across cultures?

There are certainly differences from place to place but for the most part I’m trying to show the similarities, and the similarities are our common disregard for non-human animals. I’m also trying to show how pervasive factory farming has become, and that it looks the same from Canada to Australia to Spain and Cameroon. Often when people see my photos from factory farms, they’re outraged and want to know where the farm is, who the farmer is. They believe that if that location is outed, it’ll be shut down. An interesting reaction to these images is that people think that what they’re seeing is so horrific that it must be illegal, and can be shut down on that basis. The truth is that the confinement we see in these farms is not only legal but, more than ever, standard global practice. This is why we can eat billions upon billions of them each year.

Sure, there are differences and a classic example is that dogs and cats are eaten in Asia. We see this issue in We Animals, but the book flows in such a way that we can’t point our fingers at one continent or country and say “They are doing something bad over there, not here;” the book looks at how involved we all are in the uses and abuses of animals. Hopefully, after someone’s gone through the whole book, they’ll see that the treatment of all animals needs to change, be it the dogs in Vietnam or the broiler chickens in Australia.

Your photos range from factory farms to animals trained to do tricks to fish kept in bowls without any stimulation. Do you draw any kind of line between different types of exploitation, or see some as particularly worse than others?

Some abuse of animals is much more calculated, where every step is taken to maximize the amount of profit we can ring from their lives, such as in factory farming. Fish who are thoughtlessly kept alone in tiny bowls — that’s no good either, but the intent is often ignorant or benign. There’s a gallery in the We Animals archive called “Good Intentions,” about how we use animals for our own edification but in reality the bottom line is profit, not learning. I think that zoos get away with this a lot under their advertising around being wholly about educating us and making conservationists out of us. My take on zoos is that, though we may momentarily be moved by these others, these non-humans, we don’t walk away after staring at them for 30 seconds with a determination to save their natural habitat or help them in any meaningful way; we walk away with the subconscious lesson that they are ours, for our use, for our entertainment.

I'm curious as to whether you consider yourself to be more of an activist or an artist?

I’m an activist. The camera’s my tool for creating change and I try to use it skillfully. I do love the artistry, and that’s why I got into it in the first place, but my motives have changed since I first started shooting.

The problem with calling myself an activist and not an objective photojournalist is that a lot of media outlets aren’t interested in publishing “activist” work. But that’s a whole other story, one I’m learning about and working through.

Do you ever intervene on behalf of animals, or do you only document what you see?

I document activists who intervene in the form of open rescues. There have been other instances as well. For example, I’ve documented investigations where veterinarians who were also on site as part of the investigation had to humanely euthanize an animal who was suffering greatly, such as a half-dead mink kit who was being cannibalized by his siblings, which happens often with the fur-bearing animals trapped in cages. They’re so stressed that they tear each other apart. You can see this in some of the pages of We Animals; mink missing ears and parts of their necks, or their tails. They go crazy in those cages.

It’s hard leaving all the animals behind. It’s the worst part of my work.

How often is your work conducted undercover?

More now than it used to be. I started with the animal work in a sort of “street photography” way, but now I work more often in an investigative capacity. Actually I’d really like to get back to that; shooting the ways we use animals all around us, exposing things that have become invisible. I have a photo of a woman carrying a taxidermied deer head while talking on her cell phone in Manhattan. Animal use is so deeply entrenched in our lives, we don’t even notice half the time.

Is there a picture in the book that you found especially hard to take, or to look at now?

Not so much a picture but a situation. Having to leave behind the animals in factory farms is heartbreaking. Watching animals get slaughtered by the hundreds or thousands, knowing that I could help one of those individuals but that I don’t, knowing that they are all going to their deaths unwillingly and by force. I document these animals close up and sometimes we’re looking into each other’s eyes as they go. Seeing some of the photos in the book takes me back to those moments, which aren’t moments I care to dwell in.

Ron, who is the chimpanzee on the cover of the book, and whose story is told in the last pages of the book, has a special spot in my heart. It’s not because I spent any great amount of time with him; it’s that I did meet him, and witnessed his dignity, a dignity that he maintained despite living in a 5x5x7 cage for about 30 years while being relentlessly tested on. He passed away in 2011 at a sanctuary called Save the Chimps in Florida. The book is dedicated to him. He carried the burden of “progress,” and animals by the billions carry the burden of we humans every day.

What would you say are some of the biggest issues surrounding animal rights that are currently going unseen?

Corporate interests and the government are trying to muzzle the movement and no one speaks better to this issue than Will Potter, who wrote Green Is the New Red. The U.S. implemented the Animal Enterprise Terrorism Act in 2006, and “ag-gag” laws are trying to make it illegal to take photos on any farming property or do anything that would compromise the ability of a company to make money. Industry is scared of what activists are exposing, but what does this tell us? The AETA is law in the U.S., and we have to make sure this sort of extreme bullying and corruption doesn’t spread farther afield. However, cruelty issues continue to be exposed and if anything, implementing draconian laws that muzzle freedom of speech in this way will only, eventually, fuel public outcry and curiosity. Even mainstream magazines are publishing huge stories about undercover work and animal cruelty. Animal activism is in the mainstream now; I’m looking forward to the tipping point where things start changing for the better for animals in a really drastic way.

The book ends on a hopeful note, featuring some of the good work happening in animal conservation. When it comes to animal rights, would you say humanity is moving, in general, in the right direction?

That’s sort of a trick question because things are getting better and worse at the same time. Fur farms are moving east to where there are fewer welfare standards for animals, and animals continue to be bred for fur in higher numbers. It’s discouraging. And yet it’s the rising economies such as China and India who are the big consumers of these products now. Laws are improving, slowly, for animals, mostly in Europe. People are eating less meat in North America and there are now more great, healthy and tasty options than ever before. People are learning and caring about animal welfare more than ever in some countries, while things get worse in others. It’s a bit of a chase, but, more and more people are learning, caring and acting. I have faith that this will continue. It has to. And I’m working with a lot of amazing folk around the globe to make sure we keep in the right direction.