Movies and TV relentlessly use the red-tailed hawk's cry, even to voice bald eagles. We owe the bird royalties! 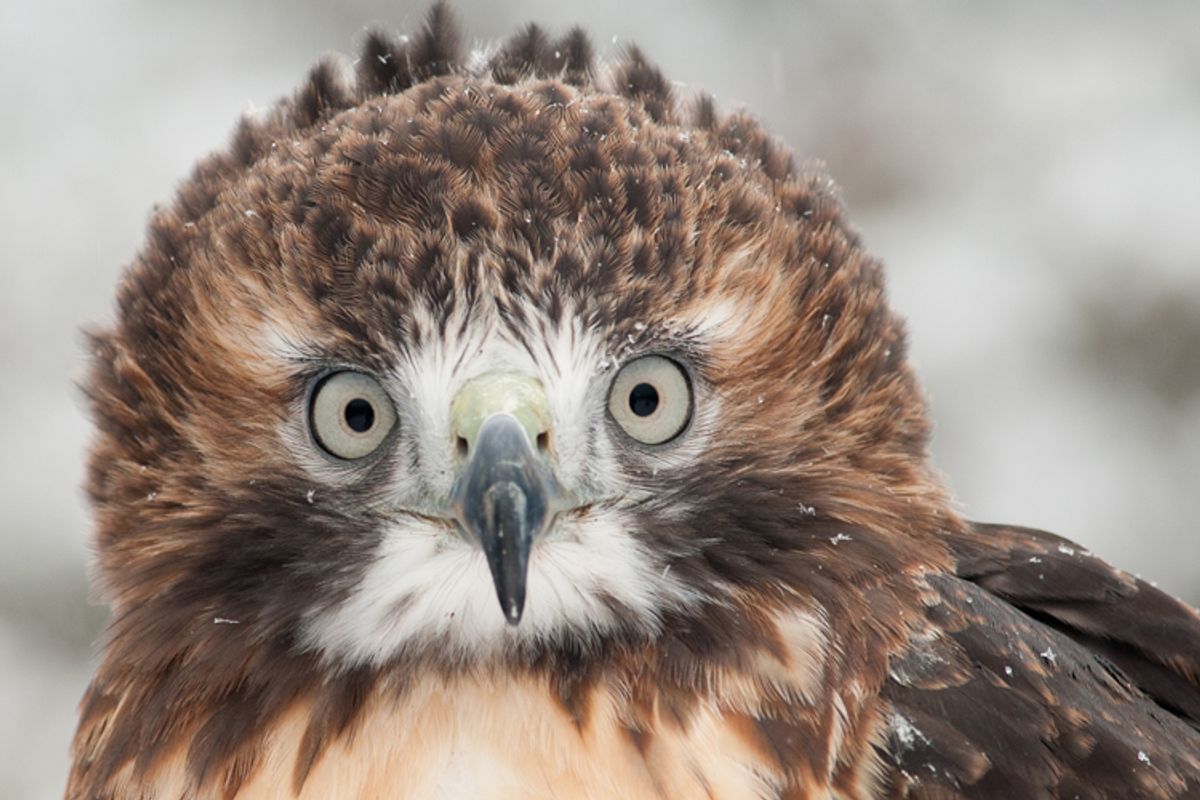 Once my partner Kathe and I were hiking at Fossil Butte in Wyoming when we heard a red-tailed hawk. We peered, hands over foreheads, at the huge Western sky, as rabbitbrush and sage scuffled in the wind. Bits of dirt pelted our calves. It was perfect soaring weather, warm and windy, the hawk hunting for prey with eyes that can make out headlines a mile away. Kathe then told me about a romance novel she’d read in which the heroine would scream like a red-tailed hawk – which is very hard to do – in order to call in her helpful wild mustang named Lucifer. Kreeeer, kreeeer we called, laughing, to the horseless landscape.

Just as steam is a visual cue for Mechanical Failure or Brooding Evil in science-fiction film, so too is the cry of the red-tailed hawk an auditory signal for Wildness in everything from romance novels to films and TV shows. Few sounds are more piercing. So, of course, our use of this call is another iteration of how we use animals in our stories, from fairy tales to myths. Around the world, birds of prey have been venerated as gods, royalty, warriors, sacred messengers, protectors and prophets. New Agers sometimes talk of a hawk’s presence as giving vision to earth activists, those tree-hugging, spirit-animal, the-revolution-won’t-be-motorized folks who may or may not know a hawk’s feather from a robin’s. But the red-tail cry is no longer woven into a narrative fabric explaining the relational roles of humans and animals in the world, as in, say, the Cheyenne tale of how a hawk beat a bison in a race, thus sparing humans from being eaten by bison and allowing us to hunt them instead.

Now the cry of the red-tail is simplistic metaphor, the vehicle for promoting the feeling of wildness rather than its ecological fact. This cry is a dramatic aural wave of the hand, a glimpse of some lost vista, the wild that we wish for but only to a point. It does not frighten us. It inspires a tidy, monadic surge of ferocity or freedom, quickly passed over in novel or movie because the hawk isn’t embodied. Disembodied, this voice gets invoked or punched up “for effect.”

One irony of this hawk’s cry becoming the popular call of the wild is that red-tails occupy a range of habitats we don’t normally think of as “nature.” I’ve seen red-tails flying over busy streets and perching on light poles by shopping centers while they tear apart chipmunks or mice. Marie Winn chronicled two red-tails pitching woo in New York City. Red-tailed hawks are a highly successful, widespread species that field-guide author David Sibley says is “the buteo to which all others are compared.” They’re everywhere, and so, everywhere, you have the chance to hear them, which is a good thing, because they do sound cool. Sibley describes the call as “a distant-sounding, rasping, scraping scream, falling in pitch and intensity cheeeeeeewv.” I hear it as kreeeer, and the number of “e”s seems variable. In any case, it’s memorable.

I respond viscerally to hawks, especially red-tails, which were the first hawks I noticed when I began birding. That high-pitched scream from the sky sent shivers up my spine.It still does. But when I hear the birds calling on TV or at a theater, I shake my head, rub my forehead or brighten with gleeful protest. I think of Jean Baudrillard’s three orders of simulacra. The French theorist wrote that there are varying levels of copies from the real. In the first order of simulacra, representation essentially works; signs – a sound, a word, an image – refer, however problematically, to reality. In the second order, representation and reality blur, as representations flourish, and distance opens between a person and the material world. In the final order, no distinction between a simulacrum and the reality it gestures toward remains; sign replaces the world. The Hollywood cry of this hawk has become a third-order simulacra. Most consumers of the copy have no actual referent; they have instead a manipulative blip that codes for “primal.”

This is true even in an otherwise celebrated nature documentary. In the fourth episode of Ken Burns’s “The National Parks: America’s Best Idea,” we never see the hawks that call from his oh-so-slow shots. The hawks don’t matter. They aren’t birds. They’re shorthand. And the wild they signal becomes absurd by repetition. In the first 60 minutes of this episode, Burns uses the red-tail’s cry no fewer than eight times, averaging one call every 7.5 minutes. We hear the kreeeer twice when a Nebraska couple escapes the lodge crowds at Glacier to discover a quiet (except for the hawk) mountain lake. We hear a hawk cry in protest during a voice-over about a plan to run a tram car across the Grand Canyon; the hawk wins. After a ranger says the parks are like “going home,” a red-tail screams its affirmation. Another calls during the reading of a diary. Another calls during a sequence about park stickers plastered on visitor cars. (Stickers?) Yet another calls when a photographer in the Smoky Mountains is “searching” for the perfect picture, and, again, when “time was running out” against the “logger’s saw.” It’s a wonder the species didn’t get laryngitis.

There are less weighty examples. In “Who Watches the Watchers,” an episode of "Star Trek: The Next Generation," the dramatic chase of Enterprise crew members by the Mintakans is punctuated by a wheeling black bird that sounds just like a red-tail. Sibley apparently needs to extend his range maps. I recently saw “Iron Man 3,” which showed some kind of vulture above Tony Stark’s about-to-be-destroyed mansion. Of course, it didn’t sound like a buzzard. I’ve heard red-tails overdubbed onto bald eagles, a species that actually sounds like a toy whistle partly plugged with gum. Think “Colbert Report.” (Maybe Hollywood can make a pact with the American Ornithologists’ Union: When you show a bird on screen let it make the sound nature intended.)  A crow flying from a graveyard on “The Simpsons”? Red-tail. Two babes by a roadside in that GoDaddy.com ad? Introduced by the cry of a red-tail. Sexy!

Film-maker Muffie Meyer, who helped make a documentary devoted to extinct North American birds called “The Lost Bird Project” and whose work has appeared many times on public television, among other outlets, explained to me what’s going on. Sound editors or designers typically don’t know “the difference between one bird or another,” she said. “Birds represent ‘out-of-doors’/nature sound...or they can be chosen for an emotional effect (loneliness, for example). Rarely do people check whether the bird is native to the locale being portrayed. There are huge sound effects libraries with tons of bird sounds, but rarely are they classified as to type of bird (except maybe crows, gulls or doves)...mostly you get designations like ‘jungle birds’ or ‘bird twitters.’”

“As for Ken Burns,” she added, “having the same bird call every few minutes is simply careless.”

You can even hear the hawk crying from a casino slot-machine called “Buffao” if you miss it on TV. If we could translate the digital cry of this hawk, might it be imploring us to mail the tired raptor its overdue royalty checks?

The red-tailed hawk call is the most distinguished and menacing of any North American raptor, even if it fails to fetch the mustang or line up the lemons. I think we find the call – even if we don’t know it – a safer kind of wild. Imagine how our limbic systems would react to Ken Burns or a slot machine using a growling bear or caterwauling cougar as the sign of the wild? Those sounds are too instinctively frightening. The one time I heard a wild cat – a mountain lion – I was alone on a trail in Idaho. Every hair on my body stood erect. I froze in alert terror, my bowels shifted, then I hoofed my way back to a cabin. The sky-god hawk signals the wild, but is smaller than us and it doesn’t attack. This is important. It means the wild can be conjured without challenging our perceived domination of it. Further, the cry is a mobile indicator of wildness; in that sense, its wide distribution plays in its favor. We don’t normally expect bears or pumas in the hood, but we can hear a bird calling.

Our endless appropriation of the red-tail does a kind of violence to the bird. Jacques Derrida spoke of a “trace” as the “mark of an absence of a presence, an always-already absent present.” I’ve always thought of this in terms of extinct animals, especially those made extinct during the Age of Humans, but I see now that it can apply to the excess of shorn presence of a living, breathing creature in the here-and-now. The faux choreography of red-tailed hawk cry with moving images of tranquility or of action becomes a way of erasing the species and replacing it with “its” call, at our behest, an echo in a circus on our screens. Some neurons in our brain, some chemicals, register the wild we’ve left behind while the rest of our body sits in a lounger. We watch. We plan our vacations.