Tram wars! Why streetcars are back — whether you like it or not

Across the country, battles are raging over this retro form of transportation 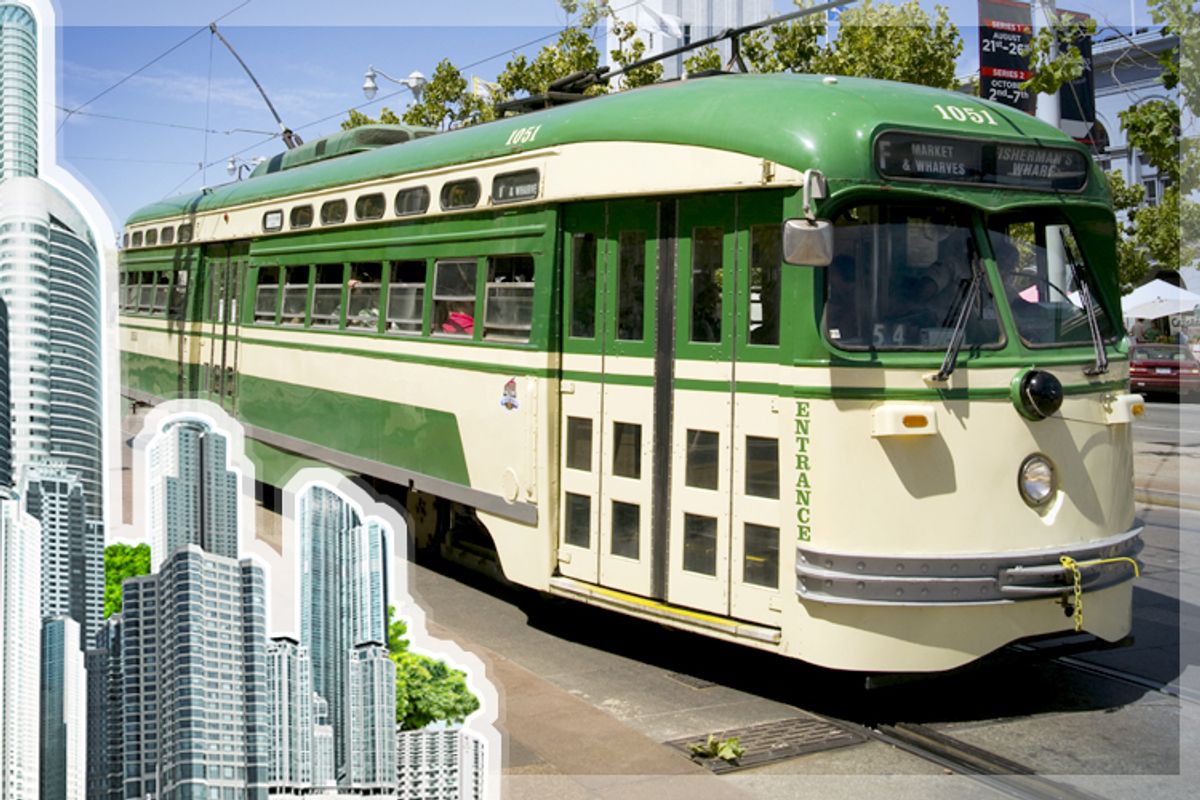 Keeping up with the progress of America’s streetcar projects is no small task. Last Friday, Washington, D.C., rolled a tram onto the street behind Union Station, the city’s first in 50 years. On Saturday, Salt Lake City opened the Sugar House streetcar line, which runs two miles from a regional rail station to a business district south of downtown. Meanwhile, it was “do-or-die” week for the Cincinnati streetcar, as supporters scrambled to save a downtown spur whose construction the mayor-elect has pledged to halt. On Thursday, they succeeded; construction in Cincinnati will continue.

Ten U.S. cities have streetcar projects in various stages of construction, while five more — San Antonio, Kansas City, Fort Lauderdale, St. Louis and Detroit — have secured funding but not yet broken ground. Still other cities, such as Milwaukee, Minneapolis and Los Angeles, have streetcar plans in various stages of development. Barring a series of Cincinnati-style meltdowns, by 2015 the U.S. will have about 30 cities with streetcars, more than twice as many as at the millennium.

This sudden expansion owes much to the revival of transit-friendly urbanism, where population and property values have risen dramatically since the turn of the century. But the streetcar boom may be more directly traced to the provisions of the 2009 American Recovery and Reinvestment Act, and particularly to the TIGER grant program, which has since doled out some $3.5 billion to several hundred transit and infrastructure projects. In total, the Department of Transportation has distributed about a half billion dollars to downtown streetcar projects over the last five years. Functioning streetcars will form a kind of urban design legacy for the Obama administration, whose most ambitious transit goal, high-speed rail, has been thwarted by the intransigence of Republican governors in Florida, Ohio and Wisconsin and beset by problems in California.

Yet streetcars remain controversial, and not only for anti-urban conservatives who “prefer options that maintain individual freedom." The transit crowd, too, has plunged into civil war over the issue. Some say the streetcar is a tool whose positive externalities can transform a neighborhood. Others say it’s a boondoggle with little evidence to its credit. To streetcar or not to streetcar is among the most virulent disputes in U.S. urban policy.

The streetcar — sometimes called a tram or a trolley — was a fixture of the North American city and many smaller towns until the middle of the twentieth century. Set on rails embedded in the pavement, 19th-century streetcars were powered by horses, steam, cables and finally connected to electrical wires that often ran overhead. Even the automobile utopia of Los Angeles had 20 routes and more than a thousand streetcars. Brooklyn alone had more than 60 different trolley routes. Avoiding them was such reflexive behavior that the city called its baseball team the Dodgers.

By the time the Dodgers ditched Brooklyn for L.A., in 1959, both streetcar networks were being rapidly dismantled. So too surface rail transport in other American cities. Streetcars were replaced by buses or sometimes not replaced at all.

Only a handful of cities — notably New Orleans — retained streetcars, and only in places. In retrospect, the tear-out looks like yet another misguided mid-century urban policy, of a piece with slum clearance and urban expressways. But does that mean it’s worthwhile to rebuild them?

The Obama administration thinks so. In addition to the four rounds of TIGER grants, the Department of Transportation revised guidelines for existing grant programs like New Starts and Small Starts to favor streetcar projects. In 2012, the Federal Transit Administration hosted a Streetcar Conference in Portland, Ore., to help city officials learn the basics of streetcar planning.

When you think about transit systems like streetcars, you probably think primarily in terms of their efficacy in moving people, as well as their cost, effect on traffic and so forth. There is little debate on this subject: supporters and opponents agree about the technical capabilities of streetcars, which are usually compared to the buses that replaced them (and which they, in turn, now supplant).

Inside, the ride is smoother and more pleasant; outside, the streetcar is quieter and cleaner than the grunting diesel buses that commonly trawl the streets of American cities. Streetcars attract more riders than equivalent bus routes, offer greater passenger capacity per square foot and can be as long as 150 feet. All this means that fewer drivers and less road space are required to transport the same number of people. Lastly, operating costs are actually lower than on a comparable bus route.

Hardly anyone does not prefer a streetcar to a bus. But they have a sizable, and some would say fatal, flaw: for $30 million a mile in construction costs, the in-traffic streetcar does not produce a marked improvement in mobility over the bus. A double-parked car can bring the system to a halt. Is it a wise to spend $98 million, as Atlanta is doing, to construct a transportation system no faster than its predecessor?

Many transit scholars say no. Transit planner Jarrett Walker has said we are building streetcars for people who can’t understand bus maps. David A. King, a professor of urban planning, has speculated that the boom stems purely from federal spending priorities, rather than organic needs. David Levinson, a transportation engineering professor and outspoken critic of the mode, calls the streetcar "an amenity,” like stadiums or festival marketplaces, and likened its promotion to “urban homeopathy."

To understand the growth of the streetcar model, you must see it as politicians do: as a catalyst for neighborhood growth first, and a transit link second. The streetcar, the thought goes, doesn’t just coax new riders aboard — it draws new residents, developers and visitors into its path. New development means new taxes, which can more than justify the cost of the streetcar, especially if gathered through value capture.

It’s not yet clear why this happens. Is it because streetcars are so much nicer to ride? Because fixed guideway infrastructure gives a reassuring sense of municipal investment? Because of related streetscape improvements and developer tax breaks that coincide with streetcar development? Or is it merely that many a streetcar is built in an up-and-coming neighborhood whose success it may claim for its own?

Development, unlike capacity or speed, is very difficult to measure — and even harder to meaningfully compare between cities. A 2010 FTA survey concluded that while almost all existing American streetcar systems are associated with development and growth, few had gathered critical data to demonstrate it. There have since been positive reports from Seattle and Tucson, and especially from Portland, but tempered with skepticism from critics. Some planners argue that Bus Rapid Transit (cheaper, faster, and more in vogue with transit purists) is more reliably associated with development. But those claims have issues too. Does it really make sense to judge the economic benefits of BRT by looking at Bogotá, a city the size of New York where fewer than one in four people own cars? How much of the growth now associated with Cleveland’s BRT was planned before the system?

You can read the literature for yourself and decide which examples of streetcar-driven growth are strongest. You may find the arguments convincing, or not, but the boundaries of the debate reveal a larger consensus: the primary purpose of transit is economic development, not getting people from place to place. Shortening commute times, reducing automobile dependency, decreasing pollution, and serving existing neighborhoods are but beneficial side effects.

It’s still possible that American cities could move toward designing streetcar systems for people who need to ride them, rather than those who own surrounding property: streetcars that enjoy the right of way in traffic and at red lights, or that extend that smooth ride for miles into underserved suburban neighborhoods. But for now, the streetcar is in many ways a symbol of the gap between the interests of transit and real estate in city planning, and the extent to which the priorities of the latter group have been able to govern the former.