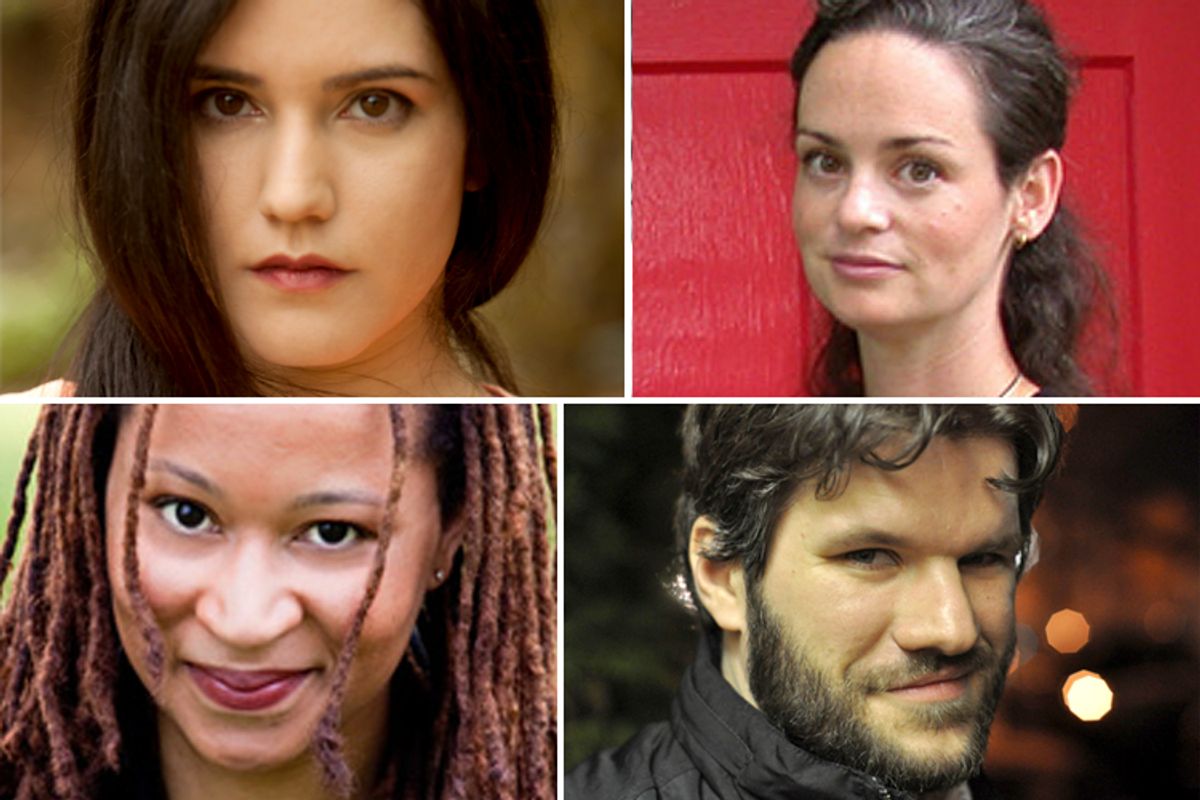 The New Year is a time to think about luck, magic and omens, so Salon asked a few authors for two-sentence stories (originally inspired by these, on Reddit), about a blessing, a curse or both. Read what they came up with, and be careful what you wish for:

Because they did not want the horses to be frightened, the widow and the widower — living in sin now, again, unmarried together since the mysterious death of their spouses — they brought the strange children in from the stables and sat them at the table, tucked them into beds the widower had hewn in happier years. In the night the widow and the widower lay beneath their own sheets and listened to the dreaming children grinding their long, sharp teeth, until at last the widow shook the widower awake to say, It's not the grinding that gets me, love, but the gnashing.

Matt Bell's debut novel "In the House Upon the Dirt Between the Lake and the Woods" was published by Soho Press in June 2013.

And sometimes the blessing is coal, anointing the lungs like the lining of a black silk purse. Heaven’s chorus is a wheeze.

Julianna Baggott is the author of 20 books -- under her own name and the pen names N.E. Bode and Bridget Asher. Her most recent novels are included in The Pure Trilogy, now in development with Fox2000.

Onstage the Canadian host wanted us to talk about language, art and politics in the new millennium but the Moroccan writer who is now based in France spoke of his sister; he said that in Morocco there are dead who are more alive than the living and they can take possession over the body and words of a young woman, and that when this recently happened to his sister in Morocco and the whole family gathered to help her, it was the most important time in his life.

“I know none of you believe me that this is a real thing but it is called Jinn in Moroccan,” he said, and right then an Iranian writer who grew up also in California and is now based in Italy added calmly: “Janna, in Farsi,” and remembering the most expected seconds in any Iraqi-Romanian-Galilean young woman’s life, those that come after you return from the west and a woman older than you is holding a spoon with true silver spheres over your hair and boiling them until they crack, I said: “Dybbuk, Dybbuk in Hebrew.”

Shani Boianjiu grew up and lives in the Western Galilee, Israel. She is the author of the novel “The People of Forever Are Not Afraid,” which has been published or will soon be published in 23 countries.

In the Ortiz Funeral Home on Lorimer, Candida Rivera de Leon dabs smudged eyeliner and raises a perfectly threaded brow at the lady’s room mirror. She holds the phone out, cranes her neck slightly – as if Miguel was still wrapped around her – kisses out her lips because the deed is done, it’s over, good riddance, nice knowing you, comemierda, autopsy: inconclusive, and anyway the mirror says she’s still got it, and when all is in place, she snaps the picture.

Daniel José Older is a Brooklyn, N.Y., writer, editor and composer, and the author of the ghost noir collection "Salsa Nocturna."

"You've heard the saying," Rodney's wife told him, "you could be entertaining angels unawares," and so Rodney let his long lost brother (turned up on Christmas Eve) eat the last of the breakfast cereal, go out at night without remembering to lock the front door, and use all the hot water for his morning shower.  But Rodney could not let go of the fact that this boy -- this man -- was no angel, and he'd been costing people since the day he was born, and so when his wife started to pray over dinner one night and had to stop -- mid-praise -- because Rodney was sitting right across from her, chewing loudly enough to be heard, Rodney found himself infinitely pleased, knowing he would soon again be rid of the curse of Rodney.

To be cursed is to be unable to remember yesterday’s blessings. To be blessed is to never forget yesterday’s curses.

Before, when he appreciated her for her personality, they'd tumble around the garden playing hide the pomegranate, skipping past every beast and fowl, feeding off of each other's exclusively good vibes. One stupid bite, and now he's nothing but pussy puns — Silk Barnacle, Canker Blossom, Frothy Creek, the Weisenheimer thinks he's so fucking clever — and she suffers through them, along with those God-damp fig leafs, irritating her skin.

Eric Sasson writes Ctrl-Alt, a column on alternative culture for the Wall Street Journal. He is the author of the story collection “Margins of Tolerance.”

The blind man, who everyone agreed was exceedingly handsome and who had married a woman widely regarded, among their acquaintances, as extraordinarily beautiful, was chosen to participate in the trial of a new medical procedure doctors believed might fully restore sight to certain patients. The surgery was a complete success, but when the handsome man saw, for the first time, his own face and the face of his wife, he was horrified, and could not be dissuaded of the notion that they, and everyone around them, were hideous monsters; and when, six months later, the procedure’s efficacy unexpectedly faded, and the handsome man was plunged again into darkness, he said that he was not, as his friends might have predicted, relieved, but rather more horrified still, because now, and forever more, he could not know with any certainty where the monsters were.

J. Robert Lennon is the author of a story collection, “Pieces for the Left Hand,” and seven novels, including “Mailman,” “Familiar” and “Happyland.” He teaches writing at Cornell University.

Since boyhood he had prayed for the power to understand animals. Now the caws and growls filled his skull, but all they spoke of was rain and loveless fucking, bloody tongues and hunger.

Saladin Ahmed’s “Throne of the Crescent Moon” won the 2012 Locus Award for Best First Novel, and was a finalist for the Hugo, Nebula and British Fantasy Awards.