Against the odds, the uber-American sitcom "The Big Bang Theory" has taken over France 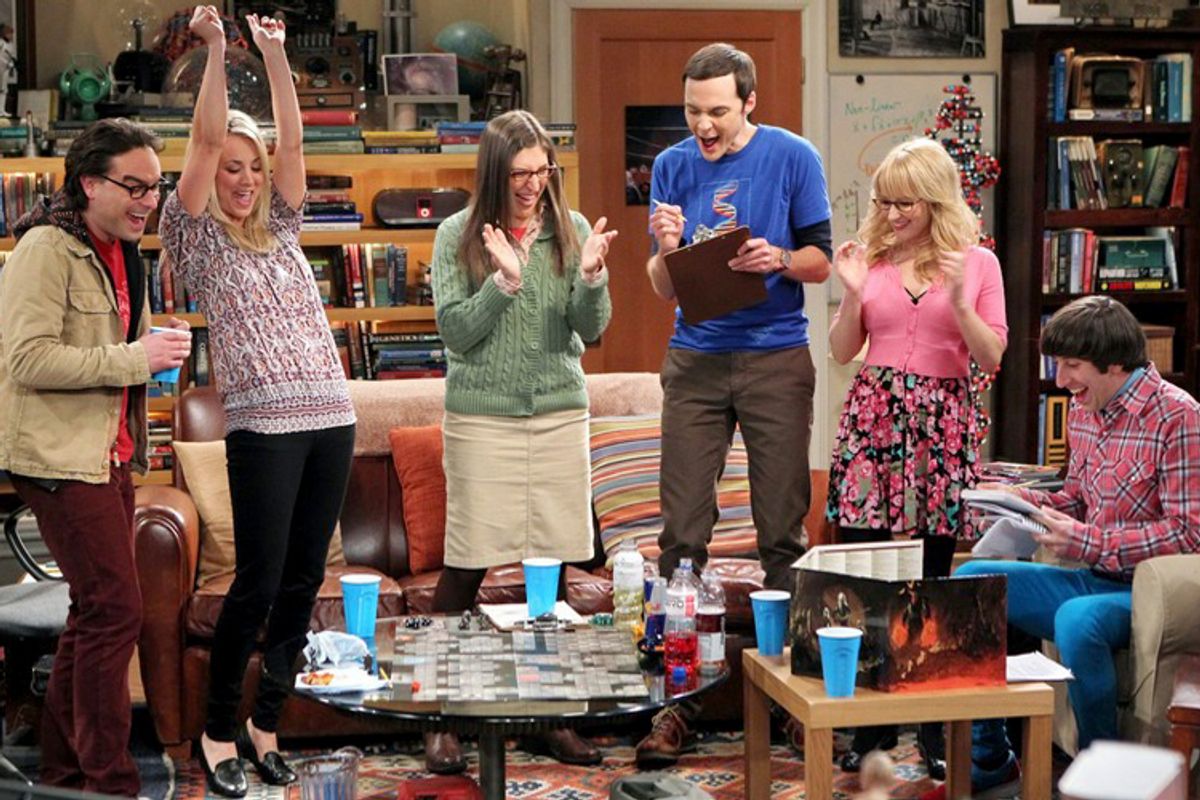 TV analysts have long been saying that “The Big Bang Theory” is the new “Friends,” but that might be true in more ways than one. Now in its sixth season, the audience for the wildly popular CBS comedy only continues to grow, making it by far the most-watched sitcom on television.

On Nov. 21, “The Big Bang Theory” pulled in an estimated 23.9 million viewers, and in the key 18-49 demographic, the show handily beats all other scripted shows with a 5.3 rating. Its next-closest competitor, “Modern Family,” pulls in a 3.4 -- with about 40% fewer young viewers. Throughout its run, “Friends” was averaging 20 million viewers each season, one of the most dominant comedies in TV. It only got more popular as the show aged, a rarity on television.

In its sixth season, “The Big Bang Theory” is showing the same legs, continually breaking viewership records for the show. Its most recent installment was the most-watched ever.

The show has accomplished this feat while other programs continue to watch their audiences dwindle. As Hulu, Amazon Prime and other streaming services give Americans more platforms to watch their favorite shows on, fewer viewers are tuned in to their TV set than in previous generations. With the increasing popularity of cable and Netflix’s influx of successful original programming -- like "House of Cards" and "Orange Is the New Black" -- "The Big Bang Theory" is becoming a sure bet at a time when there are no sure bets in TV.

But what is by far the strangest and most surprising component of the show’s success isn’t just that it pulls down impossible numbers in the U.S. This year, numbers from Eurodata TV Worldwide showed that “The Big Bang Theory” is the most popular comedy around the world, replacing “Desperate Housewives,” which had its finale last season.

“Desperate Housewives” had long been a cult success in countries like North Korea, where residents pirate the show through illegal streaming services, but other nations are increasingly tuning in to "The Big Bang Theory" on their own televisions. The show is a staple of TV programming in France, so much so that Europe’s Netflix service, LoveFilm, recently made it available for streaming.

For years, shows like “House” and “CSI” have maintained dominance around the world. In 2009, "House" boasted 88 million viewers across 66 countries, but last year "CSI" nabbed a slimmer 63 million viewers. The global success of both programs shows how lucrative crime and medical procedurals are on the international market, even as overall worldwide viewership declines.

Compare “CSI” to “Baywatch.” Back in the early ’90s, it’s estimated that more than 1 billion people tuned into “Baywatch” during its run, making the show the most popular TV program of all time.

What makes shows like “Baywatch” or “CSI” so translatable is their lack of referents, how culturally universal their plots are. In the case of “Baywatch,” its mindless simplicity makes it easy for just about anyone to tune in. To follow along, you don’t have to be a rocket scientist; you only have to know two letters of English: T and A.

However, “The Big Bang Theory” is about rocket scientists, a show about smart people packaged for the broadest possible audience. In France, where “CSI” is called “Les Experts: Manhattan,” the show is absurdly popular, especially among young people. I lived in France in 2011 (in an ill-fated attempt to live out the plot of “Midnight in Paris”), and “The Big Bang Theory” was one of just a handful of shows that every person I knew seemed to watch. I heard the word “bazinga!” more often than “bonjour.”

Although French viewership data indicates that “Two and a Half Men” enjoys strong ratings, the show doesn’t seem to have the visibility of “Big Bang” or “How I Met Your Mother,” another buzzed-about American program.

The French appeal of “HIMYM” makes sense for a culture where Woody Allen movies are still popular at the box office; “Vicky Cristina Barcelona” and “Match Point” were huge successes in Europe, where Allen continues to be a superstar. “How I Met Your Mother” is Allen-lite, half the neuroses with double the laugh track.

But even more than that, “How I Met Your Mother” was a show branded in the mold of “Friends.” Like that show, it’s a sitcom about a tightly knit group of twentysomethings living and loving in New York (while having absurdly nice apartments for their income bracket). The show’s overarching flashback structure gives it a meta-narrative twist, but at heart it’s the type of classic hangout comedy that NBC used to churn out in its sleep.

“The Big Bang Theory” shares the same DNA, a show less about what happens in any given episode than the rag-tag bunch of nerds to which stuff happens. Instead of being plot-driven like "CSI" or "Lost," it’s character-driven.

It’s hard to underestimate the impact of “Friends” in paving the way for “The Big Bang Theory” and “How I Met Your Mother,” not just in terms of structure but international appeal. Throughout the ’90s, the show was so popular with viewers abroad that foreign policy advisers felt it was helping warm foreigners’ views toward Americans, furthering American global influence. Harvard scholar Joseph Nye coined the term “soft power” in 1989, arguing that American culture and values “remain attractive,” even when our governments prove internationally unpopular.

“Friends” has been key to the changing marketplace of global television. Research from Kaplan International in 2012 showed that “Friends” was the most popular show in helping foreigners learn English, with 26% of English students saying that watching episodes of the program helped them pick up on American idioms.

The program is so embedded in how foreigners understand English that Kaplan’s Martin Hofschroer claimed he once heard his Arab cab driver use Chandler Bing’s famous catchphrase. While stuck in New York’s infamous auto congestion, his cabbie shouted, “Could there be any more traffic?”

Because "The Big Bang Theory" is similarly popular with French speakers, some professors are even integrating it into the classroom.

When studying German in high school, I was told that you know you’ve attained fluency in another language when you understand your target culture’s humor, and "The Big Bang Theory" is the ultimate test for foreign viewers, filled with references to geek culture and American entertainment.

Watching ABC’s hyper-verbose “Happy Endings” in French, I was stunned at how much the French translation left out, but little seemed lost in translation with “The Big Bang Theory.” Watching it with my French roommates, I was the one not in on the joke, as they laughed harder at the program than I did. Admittedly, I’ve never liked “The Big Bang Theory” very much, and I felt like an outsider in my own culture.

If there’s something being lost in translating “Big Bang” for a French audience, it’s their own language. According to the Wall Street Journal, “local shows in France...have trouble competing on their own airwaves with big-budget Hollywood shows that are funded by the lucrative U.S. TV market.” To gain a wider audience, the new crop of French TV shows are all shot in English, and shows like "Versailles" and "Crossing Lines" “will be dubbed later into French when they air at home.”

Another recent TV debut, “Jo,” features French cast members (like Jean Reno), but the ensemble, including Jill Hennessy of “Law and Order,” looks American. “The show goes to great lengths to make it appear natural that everyone in Paris is speaking English,” the Journal’s Sam Schechter writes. “Street signs are changed to be in English, and characters — apart from Mr. Reno's — generally speak with a standard mid-Atlantic accent common on American television.”

As the market for shows like “The Big Bang Theory” and “How I Met Your Mother” continues to grow, the question isn’t whether foreigners will understand American references -- it’s what parts of their own culture are being left behind in the process. If “The Big Bang Theory” is, indeed, the new “Friends,” “bazinga!” won’t be just a catchphrase. It will be part of how we see and understand the world -- or at least the traffic.