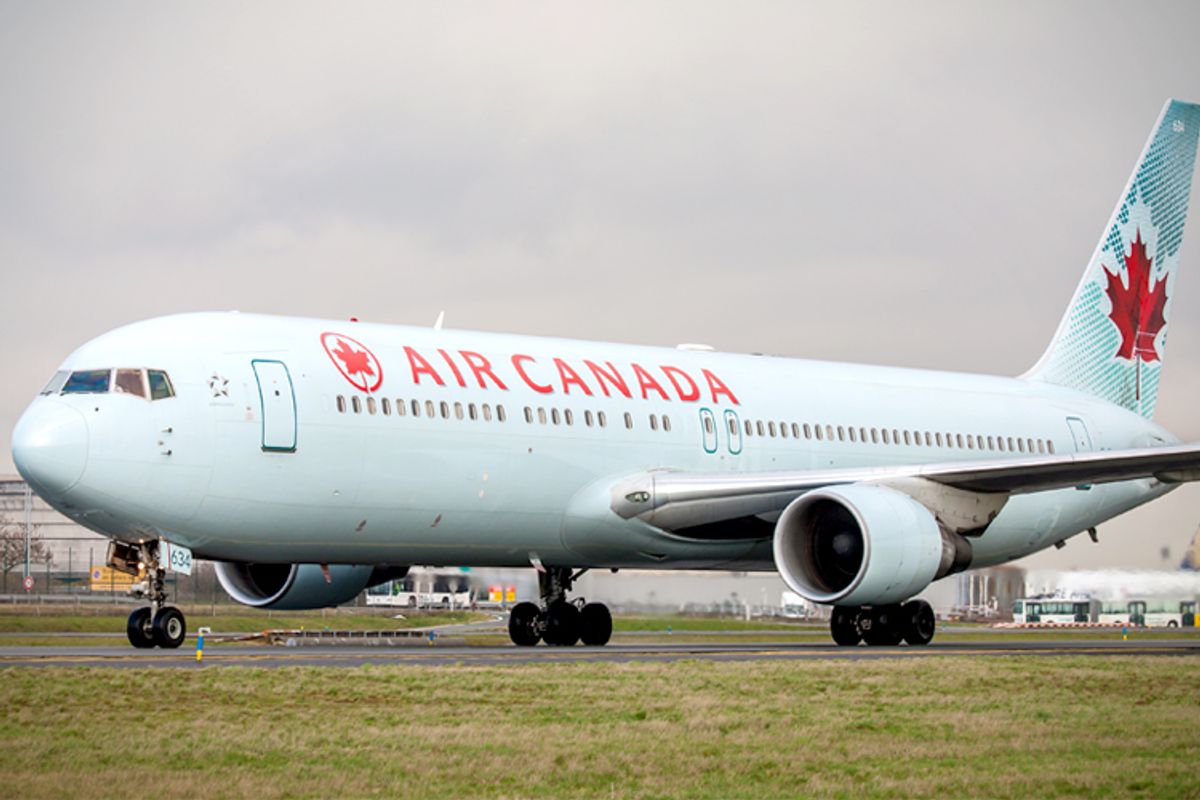 We're still fresh into a new year, which makes this an excellent time to join us here in the 21st century. Welcome to it, Air Canada!

In a speedy reversal after a very public episode of Twitter shaming, the airline hinted this week it would now amend its policy on allowing spouses to transfer travel vouchers to each other. Going forward, even married people who don't share a last name might be able to get in on the voucher transfer. Even them. The enlightenment stems from what happened when Calgary author Chris Turner had a ticket voucher for a flight to New York that he wanted to give to his wife, photographer Ashley Bristowe. He politely tweeted, "Hey @AirCanada -- your (very helpful) phone rep tells me I can't transfer a voucher to my wife pre-flight BECAUSE SHE KEPT HER NAME. Really?" The airline responded, "Hi Chris, vouchers can only be transferred to another family member before travel if they have the same family name" and explained, "This is to prevent fraudulent activity while using vouchers."

Wanting to prevent fraud is understandable, and Air Canada did note that "Our travel vouchers are transferable, but when cust. wishes to exchange with someone who has a different last name the request is handled post travel with our refund department due to past cases of fraud." In other words, Turner could transfer his ticket; he'd just have to purchase a $400 ticket for his wife first, and then apply for a refund.

Having a selectively inconvenient system at the expense of one type of family isn't the brightest institutional policy. It especially doesn’t even make sense for a Canadian business – as Twitter users pointed out, under Quebec law, both men and women keep their birth names after marriage, and they have since 1981. Further highlighting the absurdity of the policy, Turner's wife observed that "Turner can transfer the voucher to our NEIGHBOUR Kelly who has the same last name, but not his WIFE. Gotcha."  Meanwhile, as other Twitter onlookers added, married same-sex couples who don't share a same last name would also be excluded by the airline's "anti fraud" measures.

Turner himself kept at the airline about it, repeatedly noting the professionalism and courtesy of the staff but asking, "You can see how this institutionalizes a lower quality of service to women who kept their maiden names, though, yes?" And WestJet promptly jumped opportunistically into the fray, alerting would-be travelers that "Credits with us are transferable to anyone of your choosing."

Soon, the airline was promising to make an exception for Turner and his wife, but Turner told the Star, "It doesn’t change the fact that they are offering an inferior level of service on the basis of the fact that my wife didn’t change her name … They’d dealt with it before, they knew that people found it kind of ridiculous and outrageous — and hadn’t done anything, as far as I could tell anyway, to change it." But the power of #SurnameGate, as it will forever be known in the annals of Twitter disputes, had not finished working its magic. On Wednesday, Turner tweeted that in addition to making an exception for his family, "they're planning on changing the policy … replacing the voucher system with another."

A vast majority of women still shed their maiden names when they wed, and fewer women are keeping their names now than a generation ago. The negative perceptions around women who retain their names persist – when my family bought a home in 2006, our realtor said we would face opposition from the co-op board because my spouse and I had different names. In New York City. In 2006. A 2009 study revealed a stunning 71 percent of respondents favored women taking their husband's names.

Yet it's a big, bright new world of options out there. Being married no longer means just a woman pledging herself to a man and becoming somebody's missus. For professional and personal reasons, believe it or not, some of them retain their names. Men, meanwhile, marry men, and women marry women, and names don't always follow a clear-cut protocol. Spouses have different last names from each other; kids have different last names from their parents. For an airline to not get it might seem like a little thing – a small inconvenience – but it's not. Turner's fight for his right to transfer his travel voucher was about recognition. It was about respect. It was about acknowledging that you shouldn't be forced to jump through an extra set of hoops because of your name. Family is not defined by nomenclature – and you can't be a business, in this day and age, with a family policy if you don't understand what family means today. You can't have a set of rules that apply to one kind of family and not others. Well, you can, but you'll be challenged and, worse, laughed at in public for it. And then maybe if you're smart, you'll have to change.