"American Horror Story's" youth obsession: A witch's fear of aging, and ours 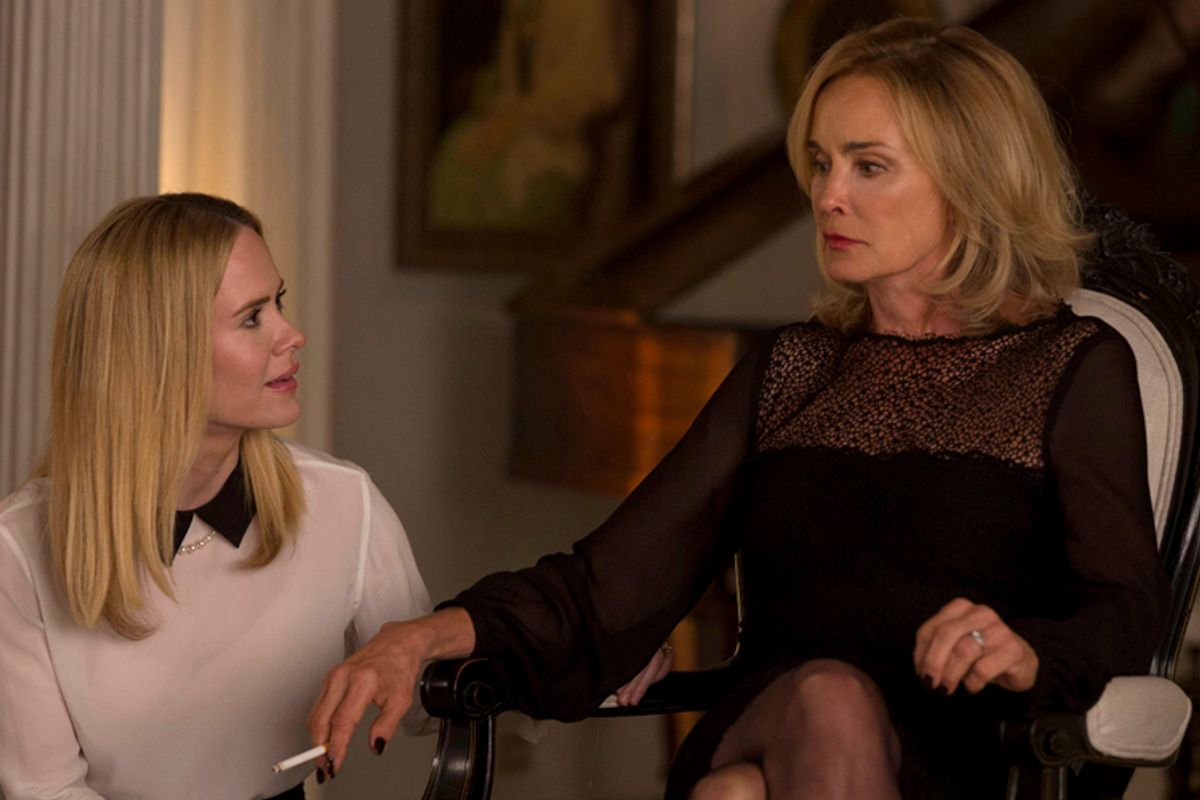 Fans of the latest incarnation of “American Horror Story” have been given a brief recess before the contemporary take on the historic Salem witch plight comes to a close. Viewers have watched as a struggling coven of witches attempts to stick together amid a barrage of attacks and disturbances from without … and within. But this season more notably explores many different forms of “attachment”: to life itself (immortality and resurrection); to hierarchical and authoritative positions (e.g., the “Supreme” witch of the coven); and to a youthful – highly sexualized and glamorized – image.

Jessica Lange’s character, Fiona Goode (the “Supreme”), is obsessed with maintaining her youthful image, sex appeal and femininity. Her attachment to this is so strong that she’s willing to risk harming herself and killing others (which she does, multiple times) in order to remain “happy.” This obsession with youth and beauty is a running theme throughout the season: The narrative indicates that as a new “Supreme” rises the previous one’s powers slowly diminish and her body begins a depressing deterioration into old age and illness. In fact, the season takes little time to demonstrate how preoccupied with this Fiona has already become.

In the first episode (“Bitchcraft”), viewers discover that Fiona has been funding a company’s research with her late husband’s money to produce a serum that restores youth and vitality: RM47. Though she ends up convincing the lead researcher, David, to inject her with an early version of RM47 for five consecutive days, Fiona still feels and looks no different. Her reaction? Thank him for his effort – with a deep kiss. The fervid lip-lock left a sharp, middle-aged David looking like a decomposing corpse, and Fiona a few decades younger. Apparently, she’s quite the kisser. But literally sucking the life out of David didn’t really do the trick. Following the kiss, she made her way to a mirror, watching in dismay as her wrinkleless face quickly re-matured before her eyes.

It wasn’t just a youthful appearance Fiona was after either. As she confessed to David earlier in the episode, “What I need is an infusion of vitality – of youth.” Even her supreme power couldn’t seem to stop what biology mandates. Moments before their passionate embrace, David snapped at her: “We are organic matter. We are animals. We rot, we die.” It’s as simple as that. And yet, with the myriad avenues available today for restoring a youthful image and transforming an imperfect body, it might not really be that simple anymore.

As a pop-cultural artifact, “Coven” arguably reflects our obsession with staying young, sexy and full of energy. Jack Nachbar and Kevin Lause, in their seminal text on studying popular culture (“Popular Culture: An Introductory Text,” 1992), outline what they call the “Popular Culture Formula”: “the popularity of a given cultural element … is directly proportional to the degree to which that element is reflective of audience beliefs and values." In other words, viewers find the reflection of their own beliefs, values and desires attractive and entertaining, and pop-cultural artifacts that reflect these tend to become successful. Following this “formula,” the reflection of an attachment to youth and vitality in “Coven” is indicative of such an attachment in society at large.

But “reflection” is just one aspect. There’s another component involved that Nachbar and Lause can’t deny: the ability of popular cultural forms to mold those very values they are reflecting back to us. To this the authors respond with a fitting metaphor: the “Funhouse Mirror.” Popular culture “both reflects our ‘image’ back to us but also alters our image in the process of doing so,” they argue. Indeed, debates surrounding this dynamic continue to unfold, perhaps most notably regarding violence in video games. And a show like "Coven" may be not just depicting our particular obsessions, but shaping them.

TV isn't the only popular cultural medium depicting a societal attachment to preserving a youthful image. Attacks against art directors and magazine editors abound for their “Photoshopping” of raw images. Actress Jennifer Lawrence’s cover photo on a 2011 issue of Flare has recently resurfaced with an accompanying animated GIF revealing just how much of a “touch-up” her photo received. Her reaction to photos from her Dior handbag campaign on the red carpet at this year’s Oscars was particularly telling: “That doesn’t look like me at all.” Lawrence facetiously admitted that she “love[s] Photoshop more than anything in the world,” even though “people don’t look like that.”

The magnitude of our youth obsession is further evinced in shows like MTV’s “True Life.” The network is currently casting a new episode in this series called “I’m Obsessed With Staying Young.” The title alone is telling. MTV asks, “Will you do pretty much anything to avoid wrinkles on your face? Do you look to plastic surgery or Botox to keep you looking your best?” The American Society of Plastic Surgeons reports that the cosmetic use of botulinum toxin type A (Botox) has seen a 680 percent increase among men and women between 2000 and 2012. We’re clearly just as concerned about warding off wrinkles as Fiona is. It’s probably a good thing, then, that we can’t all kiss like her.

There are certainly healthier ways to maintain vitality that don’t involve a potentially detrimental attachment to one's previous appearance. The celebrated Mehmet Cengiz Öz (“Dr. Oz”) is known for such advice: forget the Botox – try adding a bit more vitamin C to your diet or apply a little Argireline to your skin. But concerning oneself too much with conforming to societal standards of “beauty” and sex appeal can still become detrimental. Salon’s Prachi Gupta recently highlighted a great response from Taryn Brumfitt – mother of three, former sports figure competitor, and founder of the Body Image Movement – to Maria Kang’s viral “What’s Your Excuse?” post-childbirth photo. According to Brumfitt, health “is not dictated by your looks. Health is physical, emotional and spiritual and so much more that is not visible and not always obvious to others.” Prior to the founding of the Body Image Movement, Brumfitt was contemplating cosmetic surgery to make her breasts “perky” and “neatly tuck away that excess fat” on her stomach. But, she “had an epiphany” and canceled the procedure: “If I go through with this, what am I saying to my daughter about body image? How will I teach her to love her body? How am I going to encourage her to accept and love her body, when I am standing in front of her with a surgically enhanced body? What type of hypocrite or mother would I be?”

Perhaps “American Horror Story: Coven” is simply reflecting some of these hypocritical tendencies. Granted, Fiona’s fate is a bit more complicated, given the cyclic-mythic process regarding the next “Supreme,” but the depiction of an unhealthy attachment to youth says much about our society's concerns and dispositions. Brumfitt is correct in stating that physique is not alone in dictating our health and happiness, and many contemplative movements that embrace the emotional and spiritual aspects of well-being and healthy living would agree. But simply disparaging the obsession with youth in shows like “Coven,” or on magazine covers, is not the answer. These are reflections of our values and desires. They may be shaping them as well, but we are drawn to these popular cultural manifestations – and are entertained by them – for a reason.

In a great write-up this past October, Lynn Stuart Parramore noted that television shows like “Coven,” with its supernatural empowerment of women in a world that has naturally marginalized them, appear to “conjure up all the anger and indignation felt by females beaten down by everything from the brutality of men to the straitjacket of prescribed femininity.” These empowered females are most certainly not tattered, decrepit women, and they appear to go to great lengths to keep from becoming so. If we view “Coven” not so much as a mere reflection of something we can’t really change, but as a targeted meditation on contemporary American obsessions and attachments, then it can become a very powerful sociocultural critique, a forum for contemplating our values and desires.