No amount of facts can convince the right of reality. Here's how politics, racism and sexism guide their lunacy 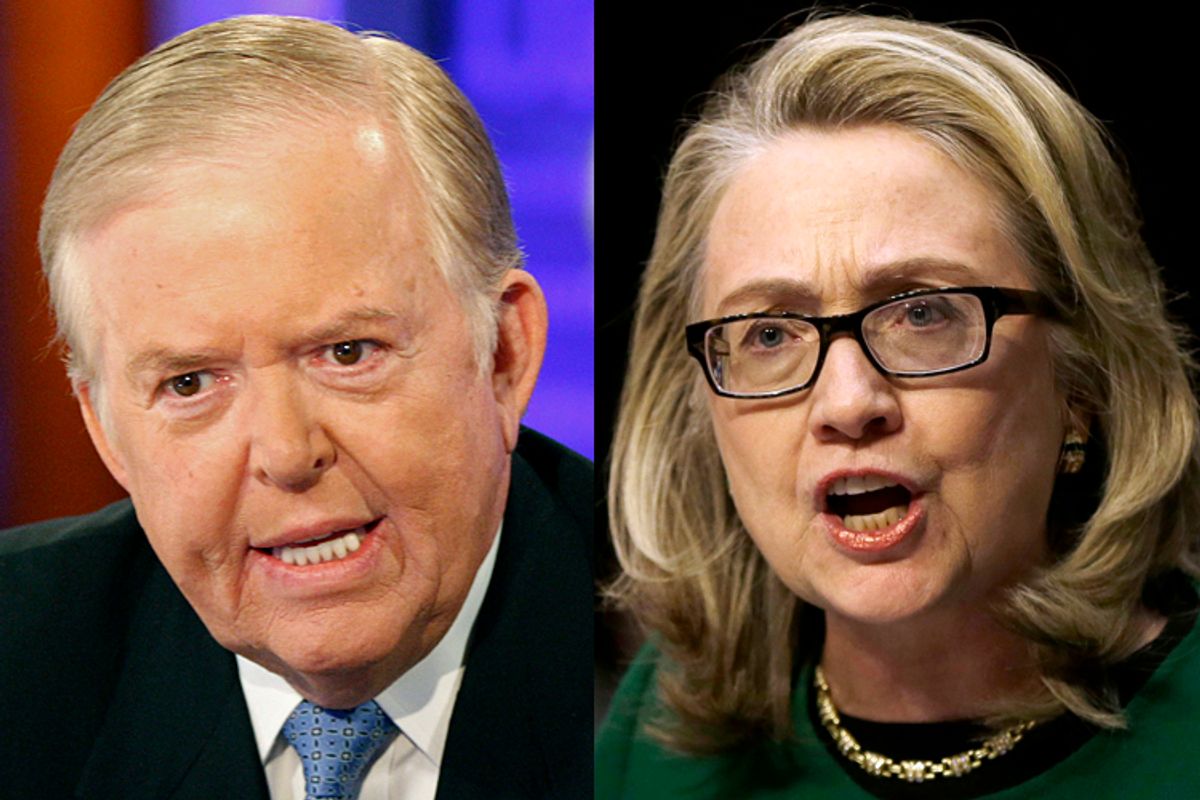 Hands down the biggest news story of the 2013 holiday season was the New York Times opus on the 2012 Benghazi attack. The Dec. 28 story debunked every single right-wing conspiracy peddled by Fox News (and also promulgated briefly by CBS News’ “60 Minutes”): the attack was, in fact, heavily motivated by an anti-Islam movie, as the Obama administration claimed; its militia ringleaders were independent of al-Qaida, and there was nothing the administration or Hillary Clinton’s State Department could do to protect the four men who died at the underdefended Benghazi compound.

Given the holiday, you may have missed the story. The folks at Fox may as well have. They continue to push their old lies: that the tragedy was the result of Obama and Clinton ignoring the growing al-Qaida threat in Libya and the danger to Ambassador Chris Stevens and his staff. When Fox bothered to acknowledge the Times’ work, it has been only to accuse the paper of carrying water for the administration, and specifically, for Hillary Clinton.

Charles Krauthammer insisted the Times piece was all about protecting Clinton’s 2016 presidential chances. “The reason that Times invested all the effort and time in this and put it on the front page is precisely a way to protect the Democrats, to deflect the issue, to protect Hillary, who was exposed on this issue with almost no issue in her tenure in the administration,” he said Monday. “It is obviously a political move.”

To be fair, the Times story had critics beyond Fox: the Daily Beast’s Eli Lake continued to peddle the story that al-Qaida played a key role in the Benghazi bloodshed.

In a Dec. 23 column on Obama’s tyranny, he effectively advocated the president’s assassination, quoting Algernon Sidney on what should happen to tyrants: “by an established law among the most virtuous nations, every man might kill a tyrant, and no names are recorded in history with more honor, than of those who did it.”

Scheuer also managed to work in racism, sexism and xenophobia, insisting Obama and Attorney General Eric Holder are protected because “the impeachment provisions of the Constitution are a dead letter; that they apply only to individuals named Nixon; or that they do not apply to black Americans supported by such towering giants of fatuousness as Oprah, Chris Matthews, Fareed Zakaria, Piers Morgan, and Hillary Clinton and her motley band of Viragos.”

David Frum argued that “Scheuer’s meltdown” would once and for all discredit him and keep him off the airwaves – Frum charges liberals with looking away from Scheuer’s extremism and anti-Semitism back when he was a Bush critic, and he has a point.

But Frum was wrong: Dobbs invited Scheuer to weigh in on the Times’ Benghazi scoop, and he came through for the Fox Business host, insisting Clinton "has blood on her arms up to her elbows for not being willing to protect the people who are representing us in Libya" and thus "killed those Americans and [the Times editors] have to kill that story or it is going to become mainstream for 2016." (h/t Media Matters.)

Clearly the right’s Benghazi fever will not be cured by facts. Obama and Clinton’s critics are so adept at projection that they imagine the New York Times is motivated by the same sort of political agenda that drives Fox’s news coverage, only for the other team. I enjoyed managing editor Jill Abramson dismissing Fox’s charges as “ridiculous,” without elaboration.

The truth is, the Times piece was not without criticism of the administration’s efforts in Benghazi. It found that the attack’s leaders had benefited from American weaponry and support while fighting Moammar Gadhafi, and suggests that while the strike on the compound “does not appear to have been meticulously planned, neither was it spontaneous or without warning signs."

The Benghazi tragedy, David Kirkpatrick wrote, “shows the risks of expecting American aid in a time of desperation to buy durable loyalty, and the difficulty of discerning friends from allies of convenience in a culture shaped by decades of anti-Western sentiment.”

That raises thorny questions of national security that demand serious bipartisan debate. But the usual suspects on Fox and within the GOP leadership continue to believe they have a way to disqualify Hillary Clinton from becoming president, and it will take much more than facts to convince them otherwise.