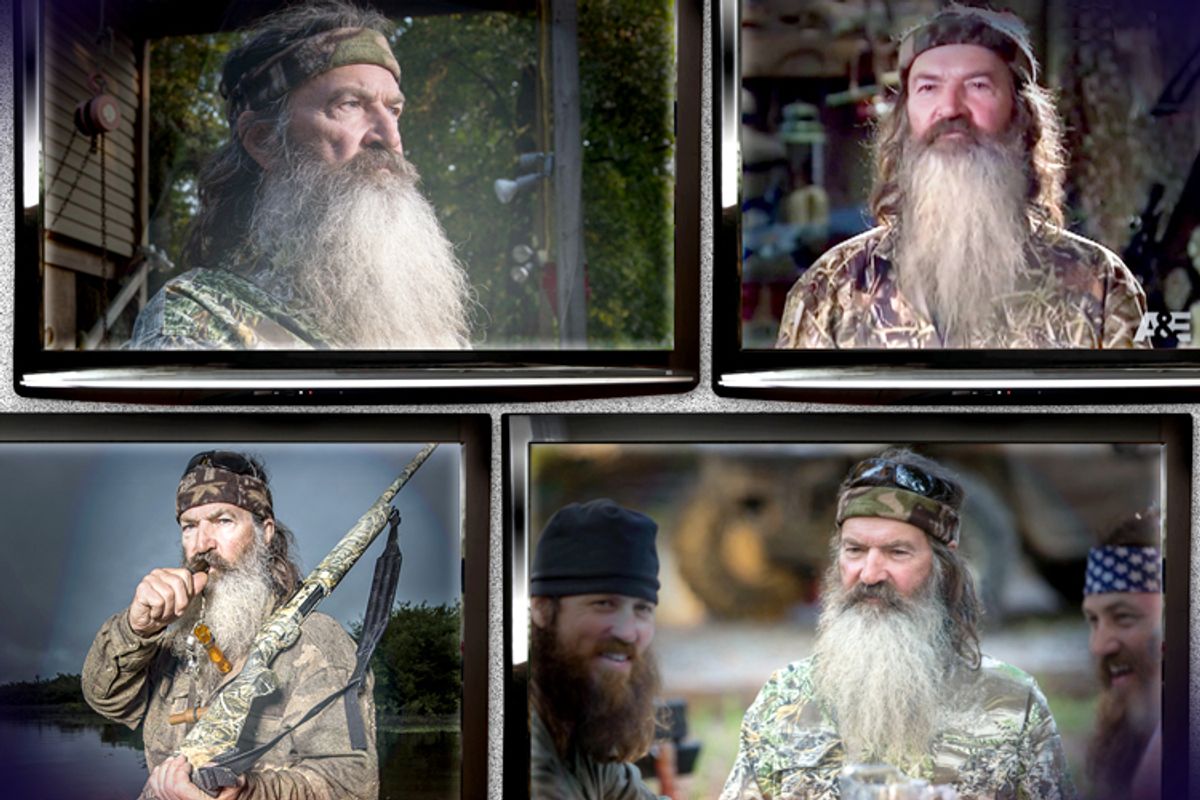 I was on vacation for the last two weeks of December, and off the grid for most of that time. Upon my return, I found I'd missed a bunch of dumb stories, along with some real news that will ultimately prove fairly unimportant in the grand scheme of things. The final Obamacare delays of 2013, along with the December enrollment figures, are at home in the latter category. The revelation that my friend Matt Yglesias invented a fake baby to get Amazon's Mom discount was more typical of the former.

There's actually wide agreement among my peers who cover national politics that the last half of December was a news dead zone, which journalists endured by building totems out of trivia, and compiling top 10 lists.

I mostly agree with this assessment, but part ways with those who dismiss the importance of the "Duck Dynasty" dust-up.

On the contrary, if there's one story I wish I'd been on hand to watch unfold in real time, it's the "Duck Dynasty" debate. If you write about politics for a living, and you were bored by the "Duck Dynasty" story, or wrote it off like you might write off a gaffe or some other creation of the outrage industry, you're in the wrong line of work. Phil Robertson's comments about gay and black people and social welfare -- and the way they pierced public consciousness -- explain more about our country's political culture than almost anything else that happened all year.

For the uninitiated, Robertson is the super-rich but conspicuously déclassé inventor of a life-like call for duck hunters. "Duck Dynasty" is a reality show that purports to expose the tension between his family's wealth and its poor, rural roots. Like if the Clampetts had decided to stick around the hills of Bug Tussle after Uncle Jed's fortuitous misfire, rather than move to Beverly Hills.

On the off chance that you were also in another country last month or spent December arguing with your family about Obamacare, these are Robertson's most explosive comments.

“I never, with my eyes, saw the mistreatment of any black person. Not once. Where we lived was all farmers. The blacks worked for the farmers. I hoed cotton with them. I’m with the blacks, because we’re white trash. We’re going across the field.... They’re singing and happy. I never heard one of them, one black person, say, ‘I tell you what: These doggone white people’ — not a word! ... Pre-entitlement, pre-welfare, you say: Were they happy? They were godly; they were happy; no one was singing the blues.”

And then on homosexuality: "Start with homosexual behavior and just morph out from there. Bestiality, sleeping around with this woman and that woman and that woman and those men …. Don’t be deceived. Neither the adulterers, the idolaters, the male prostitutes, the homosexual offenders, the greedy, the drunkards, the slanderers, the swindlers — they won’t inherit the kingdom of God. Don’t deceive yourself. It’s not right …. We never, ever judge someone on who’s going to heaven, hell. That’s the Almighty’s job. We just love ’em, give ’em the good news about Jesus — whether they’re homosexuals, drunks, terrorists. We let God sort ’em out later, you see what I’m saying?”

It was later revealed that Robertson also once said gay people are "full of murder, envy, strife, hatred. They are insolent, arrogant, God-haters. They are heartless, they are faithless, they are senseless, they are ruthless. They invent ways of doing evil."

These sentiments are ugly and wrong for reasons other writers (see Josh Barro and Ta Nehisi Coates) explained at length as the controversy was unfolding. As such, A&E, the network that produces "Duck Dynasty," suspended Robertson indefinitely and, in so doing, teed up one fairly boring entertainment industry story, and one fascinating political firestorm.

Robertson's comments don't fly in most of America. If Robertson were, say, running for Senate in Missouri as a Republican, the GOP would have disowned him immediately. But Robertson isn't a politician. He's not a mouthpiece for a political party that needs to maintain a national brand identity. Rather, his remarks reflect the views of an American cultural subset the GOP depends on for its survival. His suspension made him a tribune of modern conservatism. Thus, conservative Republicans (not just opportunists like Sarah Palin, but party standard-bearers) felt impelled to rally to his side without actually echoing anything Robertson said.

"If you believe in free speech or religious liberty, you should be deeply dismayed over the treatment of Phil Robertson," said Sen. Ted Cruz, R-Texas. "Phil expressed his personal views and his own religious faith; for that, he was suspended from his job. In a free society, anyone is free to disagree with him -- but the mainstream media should not behave as the thought police censoring the views with which they disagree."

"The politically correct crowd is tolerant of all viewpoints, except those they disagree with," said Gov. Bobby Jindal, R-La. "I don't agree with quite a bit of stuff I read in magazine interviews or see on TV. In fact, come to think of it, I find a good bit of it offensive. But I also acknowledge that this is a free country and everyone is entitled to express their views."

Republicans are getting extremely good at defending the right's cultural revanchism on fictitious Constitutional grounds rather than on the merits. In addition to Robertson, they also support private companies fighting a government requirement that employee healthcare compensation include contraceptive coverage -- not because they have a problem with birth control mind you but because something something religious freedom.

The fact is a ton of conservatives -- and a lot of Republican politicians -- don't like birth control, and certainly don't want to subsidize other people's contraception. But saying so and explaining why are not good public communications strategies -- as Rush Limbaugh learned in 2012. So they disguise their real views beneath flimsy Constitutional arguments.

Phil Robertson's Republican defenders are doing the same thing, on much weaker logical ground, to champion wildly more impolitic views: that homosexuality is an evil sin, and that things in the South were great for black people before social welfare programs came along. You won't hear a lot of Republicans saying these things so plainly. But a lot of Republicans believe them. Republicans want to amend the Constitution to prohibit gay marriage across the country. And of all the social spending programs in the country they're itching to cut or dismantle, the ones that disproportionately benefit poor minorities top the list. It's no coincidence that Republicans are much more timid and cagey when it comes to slashing programs like Medicare and Social Security that benefit people who look like Phil Robertson but didn't happen to strike it rich.

The GOP's key dilemma right now is that it has to be a party for people like Robertson without letting people like Robertson speak for them. Which is why the party retrogressed to its old agenda so quickly after the 2012 election, and why it can't eliminate its Todd Akin problem simply by putting Republicans through finishing school.