The Vikings special teams coordinator rebuts allegations of homophobia, but his son may not have gotten the memo 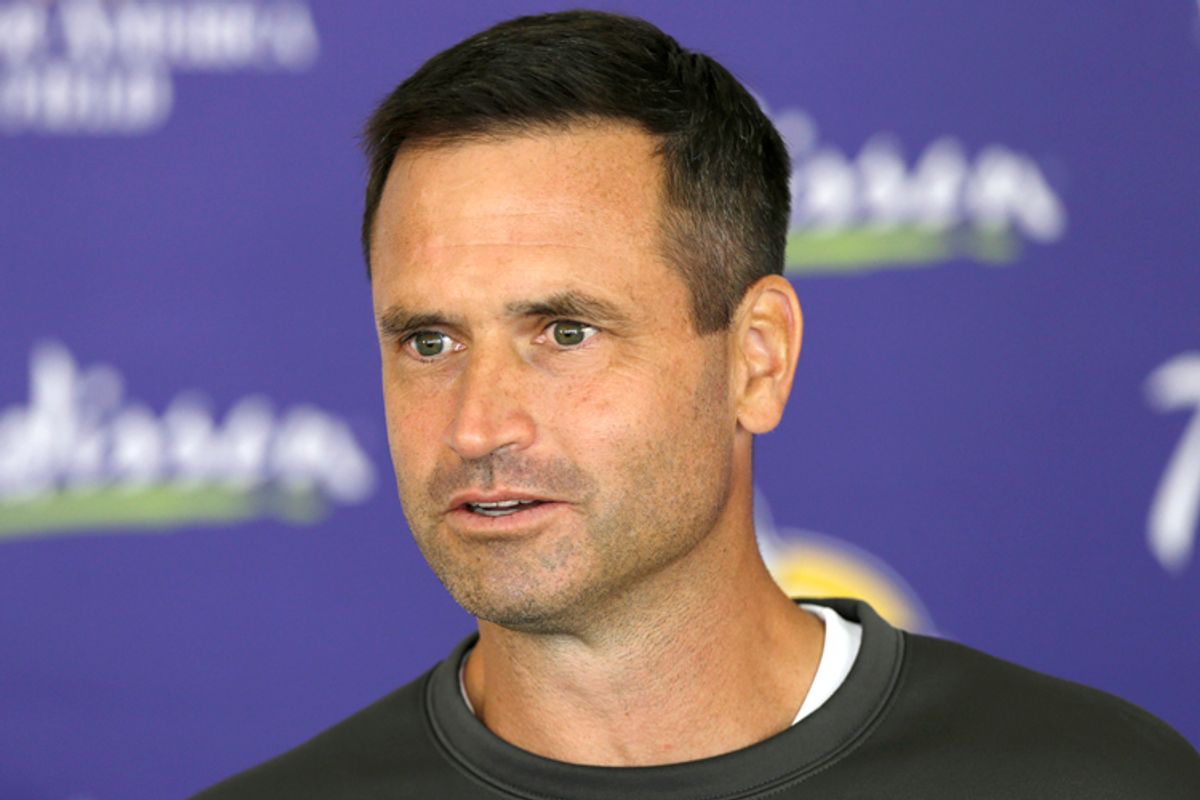 Mike Priefer says he's not a homophobe. On Thursday, after Deadspin published a scathing piece by Chris Kluwe in which the LGBT advocate and former Viking said he was "fired by Mike Priefer, a bigot who didn’t agree with the cause I was working for," special teams coordinator Priefer issued a strongly worded rebuttal. But after Minneapolis City Pages uncovered a treasure trove of anti-gay tweets from Priefer's son, it's worth pondering: Where did Priefer Jr. pick up his "no homo" attitude?

In Kluwe's Deadspin piece, he claims Priefer "would ask me if I had written any letters defending 'the gays' recently and denounce as disgusting the idea that two men would kiss, and he would constantly belittle or demean any idea of acceptance or tolerance ... Mike Priefer also said on multiple occasions that I would wind up burning in hell with the gays, and that the only truth was Jesus Christ and the Bible. He said all this in a semi-joking tone, and I responded in kind, as I felt a yelling match with my coach over human rights would greatly diminish my chances of remaining employed." He also asserts that last fall, after Kluwe wrote his now famous defense of marriage equality, Priefer told a group of team members, "We should round up all the gays, send them to an island, and then nuke it until it glows."

After the Deadspin piece appeared, Priefer swiftly issued a statement to "vehemently deny" Kluwe's version of events, and to say, "I want to be clear that I do not tolerate discrimination of any type and am respectful of all individuals. I personally have gay family members who I love and support just as I do any family member ... The comments today have not only attacked my character and insulted my professionalism, but they have also impacted my family. While my career focus is to be a great professional football coach, my number one priority has always been to be a protective husband and father to my wife and children."

Other members of the Vikings have rallied behind Priefer, including Jeff Locke, the punter who replaced Kluwe, who said via Twitter, "In my short time with the Vikings, Coach Priefer has treated me with respect and has helped me develop as a player and person. I have never witnessed any actions or statements by Coach Priefer similar to those described in the recent Deadspin article." And kicker Blair Walsh issued a statement saying, "I have had countless conversations and interactions with Coach Priefer, and I personally can attest to his integrity and character. His professionalism in the workplace is exemplary, and I firmly believe that my teammates would whole-heartedly agree. The allegations made today are reprehensible and totally not compatible with what Mike Priefer stands for."

What Priefer did or did not say is at this point a matter of considerable dispute, though so far no one seems to have come forward to corroborate Kluwe's account. But a man whose "number one priority" is his wife and children appears to be raising a son who doesn't share his "respectful of all individuals" stance. As writer Aaron Rupar revealed Thursday, Michael Priefer Jr.'s Twitter account – which was locked on Thursday – teems with casual RTs about who's "a fag," and references to all things "super gayyy," "soo gay" and "no homo," as well as retorts to others that "yourgay" [sic]. Things Michael Priefer Jr. appears to think are gay include school, a Prius with black rims and people.  While his son's attitudes are not necessarily a reflection of Priefer's own views, it's reasonable to ask how that Priefer family "love and support" plays out in reality, and whether it had anything to do with Kluwe's choice to publicly challenge Priefer's fitness "as a teacher and a role model."