Rich Catholics vs. the pope 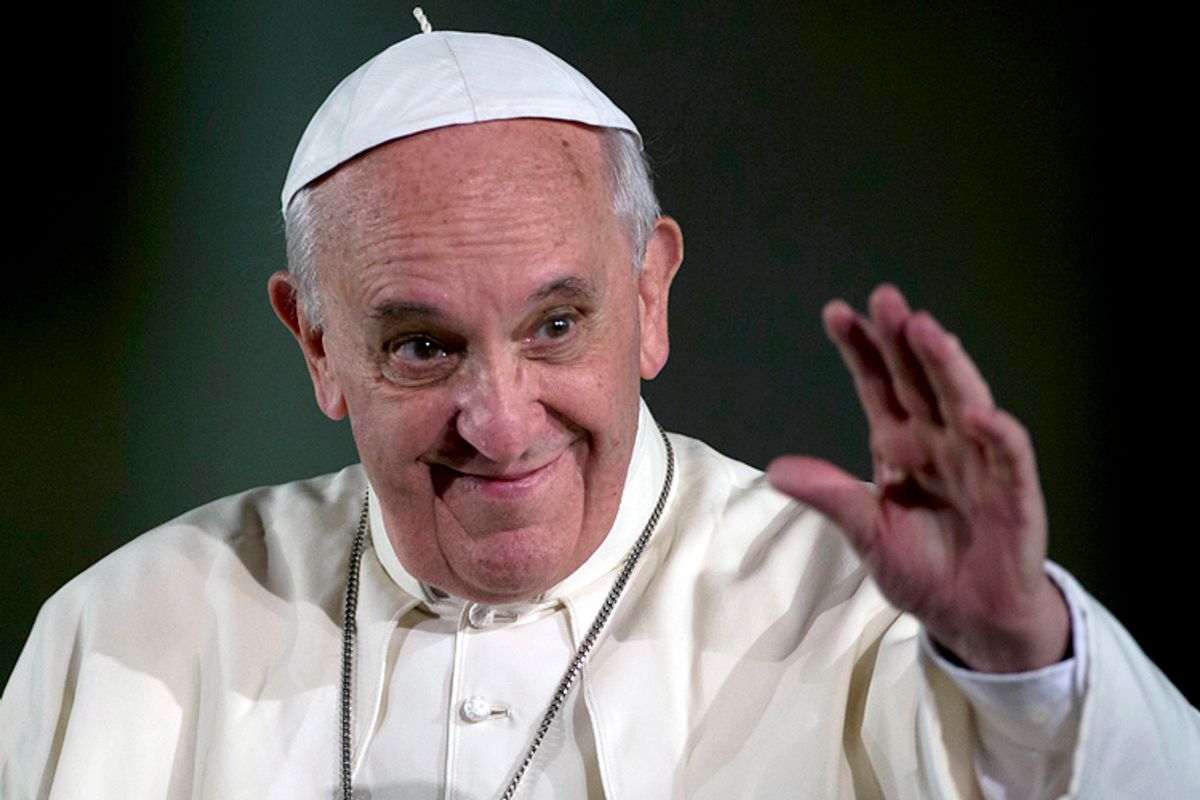 If anyone wonders whether Pope Francis has irritated wealthy conservatives with his courage and idealism, the latest outburst from Kenneth Langone left little doubt. Sounding both aggressive and whiny, the billionaire investor warned that he and his overprivileged friends might withhold their millions from church and charity unless the pontiff stops preaching against the excesses and cruelty of unleashed capitalism.

According to Langone, such criticism from the Holy See could ultimately hurt the sensitive feelings of the rich so badly that they become "incapable of feeling compassion for the poor." He also said rich donors are already losing their enthusiasm for the restoration of St. Patrick's Cathedral in Manhattan -- a very specific threat that he mentioned directly to Cardinal Timothy Dolan of New York.

Langone is not only a leading fundraiser for church projects but a generous donor to hospitals, universities and cancer charities (often for programs and buildings named after him, in the style of today's self-promoting philanthropists). Among the super-rich, he has many friends and associates who may share his excitable temperament.

While his ultimatum seems senseless -- would a person of true faith stiff the church and the poor? -- it may well be sincere. And Langone spends freely to promote his political and economic views, in the company of the Koch brothers and other Republican plutocrats.
Still, a pope brave enough to face down the mafia over his financial reform of the murky Vatican Bank shouldn't be much fazed by the likes of Langone.

Yet Langone has reason to worry that the Holy Father is in fact asking hard questions about people like him. Indeed, he could serve as a living symbol of the gross and growing economic inequality that disfigures the American system and threatens democracy.

As a leader of the New York Stock Exchange, he was largely responsible for the scandalous overpayment of his friend Richard Grasso, the exchange president who received nearly $190 million in deferred compensation when he stepped down. Although New York's highest court eventually upheld Grasso's pay package, it was a perfect example of the unaccountable, self-serving greed of Wall Street's elite.

Anything but repentant following the revelation and repudiation of the Grasso deal by NYSE executives, Langone told Forbes magazine in 2004: "They got the wrong f---ing guy. I'm nuts, I'm rich, and, boy, do I love a fight. I'm going to make them s--- in their pants. When I get through with these f---ing captains of industry, they're going to wish they were in a Cuisinart -- at high speed."

He embarked on a furious vendetta against Eliot Spitzer, who had fought to recapture Grasso's millions as New York attorney general. And when Spitzer was forced to resign as governor in the wake of a prostitution scandal, Langone's public gloating seemed to indicate that he had played a personal role in exposing his enemy's indiscretions. He particularly hated Spitzer for attempting to punish and curtail the worst misconduct in the financial industry.

While Langone passionately defended the outlandish grasping of the super-rich like his friend Grasso, however, he has displayed far less indulgence toward workers, especially those struggling to support their families on poverty wages. Until just last year, he was a director of Yum! Brands, the global fast food conglomerate that includes Taco Bell and Kentucky Fried Chicken among its holdings -- and that spends millions annually to hold down the minimum wage and prevent unionization of its ill-paid employees and farmworkers.

What all this adds up to is hundreds of millions of dollars in questionable compensation for financial cronies, but not a dime more for low-income workers. It is exactly the kind of skewed outcome Francis means when he speaks about today's capitalists, "the powerful feeding upon the powerless," and the need for renewed state regulation to bring their burgeoning tyranny under control. He is talking about Langone, the Kochs and an entire gang of right-wing financiers.

"How I would love a church that is poor and for the poor," Francis said not long after his election to the papacy. This could be what he gets -- and that might not be so bad, for the poor and for all of us, Catholic or not, who love justice.