The war over "Wolf of Wall Street"

Does Scorsese's would-be masterpiece glorify greed and debauchery or attack them? And how do we know for sure? 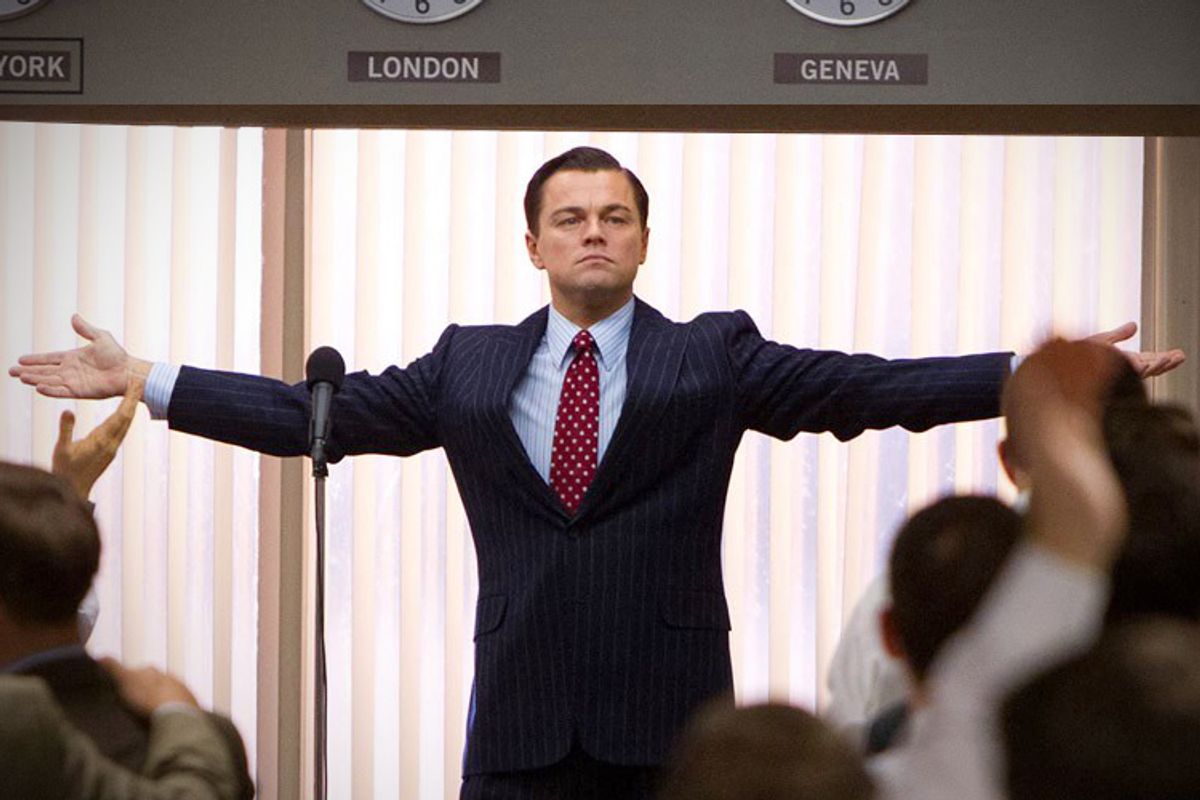 Here we are again: How does Martin Scorsese feel about Jordan Belfort, the debauched penny-stock tycoon played by Leonardo DiCaprio, who never quite receives his just deserts in “The Wolf of Wall Street”? How did Vladimir Nabokov feel about Humbert Humbert, the pedophile narrator of his most famous novel? How does Brian DePalma feel about Al Pacino’s Tony Montana (“Say chhh-ello to my leetle frien’”) in “Scarface”? For that matter, how did Howard Hawks feel about Paul Muni’s Tony Camonte in the original 1932 “Scarface,” which had to be released with a didactic prologue, a capital-punishment ending and an interpolated scene in which a group of newspapermen sit around talking about how bad the bad guys are? (I’m deeply sorry for issuing a spoiler on a movie made 80 years ago.) Oh, and while we’re on the subject, how do Kathryn Bigelow and Mark Boal feel about extraordinary rendition and torture? Are they more or less responsible for it than, say, Donald Rumsfeld?

Now that I’ve enraged nearly every possible reader, let me hasten to add that I’m not suggesting that all these cases are the same. (Or that you're a hopeless Philistine if you find any of those works troubling.) I am saying that once you start interrogating the moral intentions behind art and culture, sooner or later you end up asking questions that don’t have clear answers. I recently read an article or discussion online (which I now can’t find) about Picasso’s masterpiece “Guernica,” which raised the question of whether it was a great painting because it was an antiwar and anti-fascist painting, or whether that was an extraneous factor that made the audience feel virtuous about admiring the work’s balance of careful design and explosive aesthetic innovation. Everyone’s answer to that question will depend on his or her subject position and analytical perspective, but we can say a couple of things: It is clearly possible, God knows, to make bad art against war and fascism, and D.W. Griffith, Leni Riefenstahl and the Italian Futurists created good or great art that was informed by despicable politics. That said, does it really seem right to suggest that the power of “Guernica” has nothing to do with the political passion that we know, or believe, lay behind its creation?

Some works of art come with explicit meanings attached and some don't, but meaning is an anarchic beast, a shape-shifter that never stays still, and the relationship between what books or movies or paintings "say" and how they affect us is never entirely clear. It's obviously prejudicial to compare Picasso's most famous painting to a brand new movie whose legacy is unknown, but let us note that "Guernica" drew mixed reviews and sparked heated debate on its 1937 unveiling; many leftists thought it lacked a clear political point of view. That’s roughly where we find ourselves with “Wolf of Wall Street,” a deliriously and deliberately hyperbolic satire that has become, since its Christmas Day release, the latest litmus test of cultural politics. It has pitted feuding camps of film critics against each other, sometimes within the same publication: David Denby of the New Yorker was alternately nettled, bored and scandalized by “Wolf”; after grousing that the movie is "a bit of a trap for critics" and that he may be considered squeamish for disliking it, he ultimately calls it “disgusting, obscene filmmaking.” Richard Brody, the magazine’s ultra-erudite film blogger, took an opposite tack, describing "Wolf" as “an exuberant, hyper-energized riot” and perhaps Scorsese’s crowning masterpiece. (Yes, the world of New York film criticism is very small, and I'm on cordial terms with both of them.)

It supposedly got a banker-heavy preview audience in Manhattan’s financial district — literally within sight of the Goldman Sachs trading floor — cheering at the “wrong” moments, including Belfort’s raid of his secret cocaine stash (inside the sofa cushions) and his attempt to double-cross the FBI and federal prosecutors. In the other direction, “Wolf” also sparked a brief but surprisingly intense backlash in the social-media universe, largely among people who I suspect had not seen it. Christina McDowell, whose father went to prison as a business associate and co-conspirator of Belfort’s, published an Op-Ed in the LA Weekly directed at Scorsese and DiCaprio, accusing them of glamorizing Belfort’s misdeeds, “exacerbating our national obsession with wealth and status and glorifying greed and psychopathic behavior,” sending a “misogynistic, ass-backwards message” to younger male viewers, and being traitors to some unspecified liberal agenda. “Did you think about the cultural message you’d be sending when you decided to make this film?” she asked, and I don’t think that question is meant to be rhetorical.

I won’t pretend to be neutral on “Wolf of Wall Street,” which I think is a terrific film that will likely get better with repeat viewings, a Grand Guignol spectacle of absurd and often nightmarish excess that snorts cinema history the way Jordan Belfort snorted coke and whose intentions are, in fact, pretty clear. There are various ways to respond to McDowell’s simplistic understanding of culture as politics, including the observation that “Marty” and “Leo” (as she addresses them) are not personally responsible for our national obsession with wealth or the misogynistic attitudes of white male stockbrokers in the 1990s. Forbes blogger and Salon contributor Scott Mendelson made the fascinating point (in a Facebook post) that some people seem more exercised about the depiction of Wall Street greed and excess in “Wolf,” or by the depiction of torture in “Zero Dark Thirty,” than they were by the actual phenomena as they occurred in the real world. It’s a peculiar testimonial to the power of culture, or perhaps a fulfillment of Guy Debord’s vision of “The Society of the Spectacle,” in which “all that was once directly lived has become mere representation.”

When it comes to the movie itself, I’m largely in the same camp as Brody and Glenn Kenny and my former colleague Matt Zoller Seitz, all of whom have written wonderfully expansive and passionate articles about it. (We see something of an ideological fissure opening here, by the way, between the more formalist critics who support “Wolf” and the "humanists" who prefer the vision of vintage venality in David O. Russell’s more romantic, sentimental and audience-friendly “American Hustle,” now seen as the Oscar frontrunner.) Here is Brody, responding to the suggestion that “Wolf” ignores those who were bankrupted and victimized by Jordan Belfort’s high-pressure stock scams:

To see Belfort’s victims, look in the mirror — and look there to see Belfort’s collaborators too. There are no innocents in Scorsese’s vision; the movie is a unified field of dubious desire, of temptation, evil, and sin … “The Wolf of Wall Street” is the first modern movie about the world of finance because it situates money in the so-called libidinal economy. Scorsese’s vision of power also involves humiliation; his understanding of wealth isn’t just luxurious and carnal, it’s also excremental, sanguinary, emetic, carnivalesque, and violent.

Critic Nick Pinkerton, author of the single funniest “Wolf”-related tweet to date, has also written thoughtfully about the way critics sometimes use the idea of “the audience” — conceived as an undifferentiated and doltish mass, easily manipulated into believing that torture or cocaine use or Wall Street fraud are cool because they saw them in the movies — as a cover for their own discomfort. Taking pleasure in Belfort’s pep talks to his sales staff, which are like a series of coked-up rewrites of the “band of brothers” monologue from “Henry V,” invites us “to admit that the same base drives and puerile fantasies that Jordan exploits exist somewhere in one’s self,” Pinkerton writes. “Here is where the convenient scapegoat of ‘the audience’ comes into play, for of course they may be taken in, and it’s them we’re concerned about, not our sophisticated, enlightened selves.”

But — you knew there was a “but” coming, right? — let’s back up and take another look at Christina McDowell’s non-rhetorical question, which isn’t as dumb or unreasonable as some of the movie’s defenders have made it sound. Did Scorsese and DiCaprio think about the cultural message they were sending in “Wolf of Wall Street”? Sure they did, and they made a deliberate decision not to spell out that message in block letters, or perhaps not to formulate a message at all, in the sense McDowell and many other people might prefer. “Wolf” is a purposefully disorienting and confrontational film, made on a grand scale, one that absolutely contains the possibility of variant interpretations, of “bad” messages or undesirable social effects. Like most Scorsese movies, it embodies a dark, essentially religious vision of mankind and the universe, presented within a secular frame. I have already suggested that the movie's version of Belfort can be understood as an anti-Jesus, preaching the soulless, capitalist version of the Sermon on the Mount.

In Scorsese's slippery and ingenious final scene, when DiCaprio's Belfort has left prison for a new life as a motivational speaker (and is introduced to a New Zealand audience by the real Jordan Belfort, making a cameo appearance), “Wolf” appears to indict its entire audience as simultaneously his marks and his pupils, eager for the words of wisdom that will make us as rich, as self-confident and as profoundly empty as he is. At the risk of falling into the trap Pinkerton describes, is it any wonder that many viewers feel alienated by this film? Those Wall Street dudes yahooing at Belfort’s misdeeds were not “misreading” the movie, at least not any more than the Wall Street dudes of the ‘80s were in adopting Michael Douglas’ Gordon Gekko as a role model. They were responding to its inherent ambiguity, which will strike many people (perhaps most) as a failure.

It should not surprise anybody that the director of “Taxi Driver,” “Raging Bull” and “Goodfellas” challenges us once again to identify with a vicious and amoral antihero, a guy who avoids punishment for his crimes and whom we can only hope we never meet in person. Scorsese has been making films across more than 40 years of immense cultural ferment, and understands that there’s no way to know in advance how audiences will respond to a character or a story. Norman Lear did not intend Archie Bunker to become a conservative avatar, Scorsese himself did not mean Travis Bickle to be a heroic urban vigilante (let alone the inspiration for a would-be presidential assassin), and DePalma assuredly did not intend Pacino’s ludicrous Tony Montana as an erotic demigod for future generations of wannabe gangsters and rappers.

It’s too early to know whether “The Wolf of Wall Street” will be understood as a masterpiece or a misguided and self-indulgent flop, and invective on both sides will not settle the question. If the movie seems unsatisfying, that’s because we yearn for some kind of grandiose and dramatic revenge against the Jordan Belforts of the world, against the corrupt and criminal plutocrat class who humiliated and bankrupted us, who took advantage of our “base drives and puerile fantasies” and who do so still. (Or at least, to go back to Scott Mendelson’s point, we yearn for it in fiction.) We don't get it in symbolic form within “The Wolf of Wall Street,” and we certainly don't get it in reality, at least under the current dispensation of capitalism. How does Scorsese feel about Jordan Belfort? Pretty much the way the rest of us do: We claim to hate him, but our actions suggest otherwise.