10 striking images of graffiti in Kandahar

On cement blockades throughout Kandahar, members of the military defy orders to make art 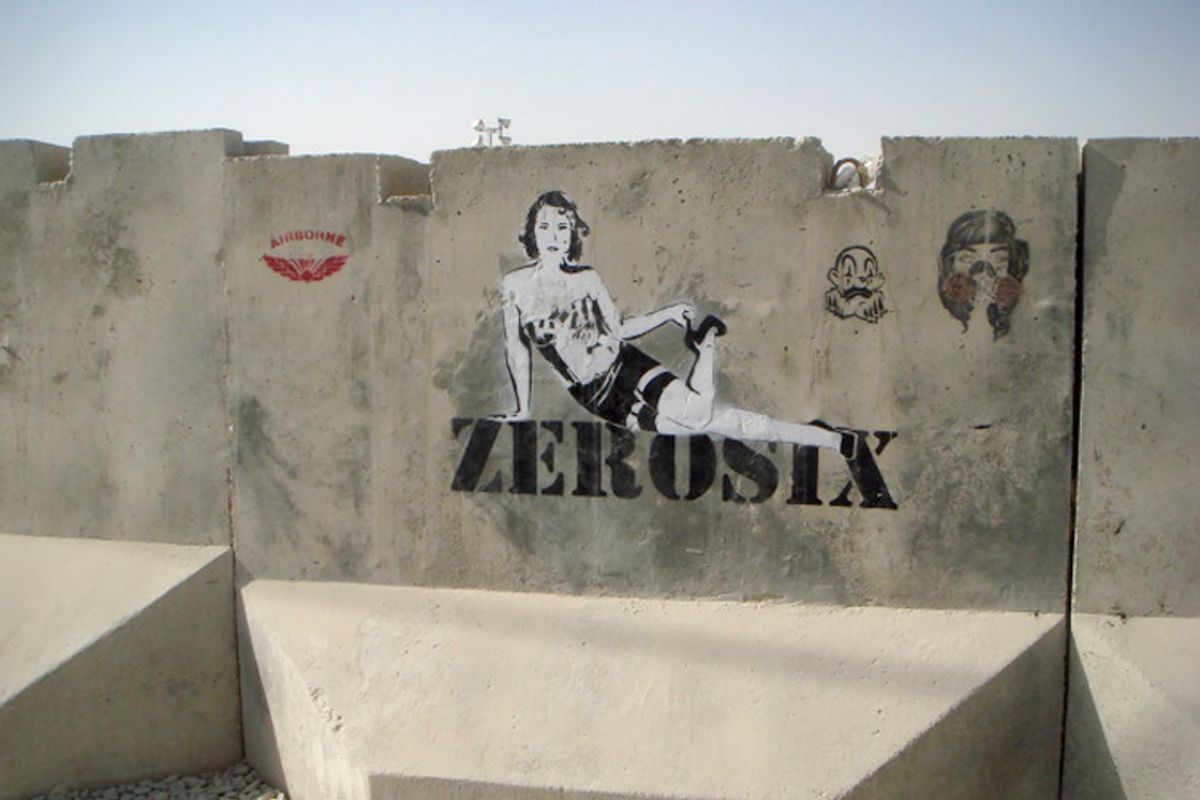 When America’s coalition invaded Afghanistan in 2001, they stormed Taliban strongholds such as Kandahar, obliterating the presence of local warlords and scattering anti-American sentiment across the region. Entire cities were reduced to rubble, and allied troops dug in for a decade-plus war of attrition that continues today.

That was when James Toler, a 29-year army veteran and helicopter pilot, first set foot in the dusty ruins of Kandahar – which, in the wake of a bitter offensive, had been claimed by American forces as a regional base of operations. Their seat of power wasn’t particularly grandiose.

“There just wasn’t anything there,” Toler says. “It was pretty much the Wild West. But as always, when the army moves into a new space, one of the first things they do is build walls. And although they start out as temporary ones, it doesn’t take long before they’re replaced by big cement blockades. The place effectively becomes a maze.”

Kandahar’s people were swiftly divided by a series of soaring cement walls that snaked throughout the battered city – and for soldiers, the vital defenses became barriers of a different sort. Reminiscent of the Berlin Wall before it, the inhibiting nature of Kandahar’s new fortifications aptly demonstrated the divisive presence of the scores of young soldiers unable to fully comprehend why they were in Afghanistan in the first place.

When James Toler left the command center after his first stint in Kandahar, he says the newly constructed walls were quite plain – a few odd spray-painted, army-approved company insignias, nothing more. Yet as he began to come and go over the decade that followed, the officer noticed the city’s bland, bullet-riddled walls began to transform into an urban canvas.

“These graffiti tags just started popping up more and more, and soon it got to the point where some of the walls had as many as 20 per segment,” he explains. “Somewhere along the way from that acceptable practice of putting up the logos of a particular motor pool, it turned into real street taggers – the true artists – coming out at night and showing just how good they really were.”

The resourcefulness of America’s enlisted street artists has proven remarkable. In order to gather art materials, for example, they salvage excess green and sand-colored paint from tank maintenance crews. Then, to reproduce a plethora of WWII-era pin-ups and emotive pop-culture icons, the troops trim out stencils using knives and the odd bit of cardboard they may come across.

The images speak for themselves. By 2011, a friendly war between artists soon emerged – waged, instead of bullets, with the likes of Brad Pitt’s melancholy, ideological rants in "Fight Club," scantily-clad pin-up girls and kid-friendly "Looney Tunes" characters.

Yet whether reminiscent of a childhood lost, or merely an attempt to convey brash political statements, Toler says the sanity of America’s institutionalized occupation force depends heavily upon the ability of soldiers to find some sort of creative outlet.

“These soldiers are starting to get tired, and they need some way to express that,” he says. “Artistic expression is a form of escape and release from the trauma of war – it’s a form of therapy. And so I think these taggers came up with an ingenious way to cope with their stress.”

Command HQ certainly isn’t amused by the soldiers’ artistic expression. Yet after years of accumulation, this military art show has become fully integrated into America’s war on terror. Hundreds of thousands of Western troops have filed past these tags, eaten their meals below them and hunkered down against them during rocket attacks. Consequently, these emotionally charged works of graffiti aptly demonstrate a Vietnam-era angst amongst U.S. troops that’s being channeled through works of beauty – and now, soldiers are working to see them preserved.

It’s difficult to say how best to go about doing that. Several troops have offered to start by simply chipping off blocks of Kandahar’s cement walls bit by bit with a sledgehammer and shipping them off to museums across the globe – the way remnants of the Berlin Wall have come to survive. But at the very least, soldiers like Toler are working to compile a book of images and postcards to recognize the astounding work of these enlisted street artists, so that something palpable remains after the Pentagon decides to bring the walls crashing down once and for all.

Either way, America’s latest generation of disillusioned warriors (and the insurmountable number of lives they’ve extinguished) do indeed deserve a monument of some candor. And seasoned veterans like James Toler are desperate to ensure that monument incorporates the artistic expression of the real men and women who fought in this war.

“History is so easily lost,” Toler says. “And once we lose things like these tags, they’re seldom recovered. But we can recover this. It’s such a simple monument, and it’s made with earnest sincerity – it’s not just some contrived piece of crap, but an actual, tangible piece of history.”

“We have a golden opportunity right now to put these in place as a reminder of the past," he adds. "I hope we don’t let that opportunity pass us by.”