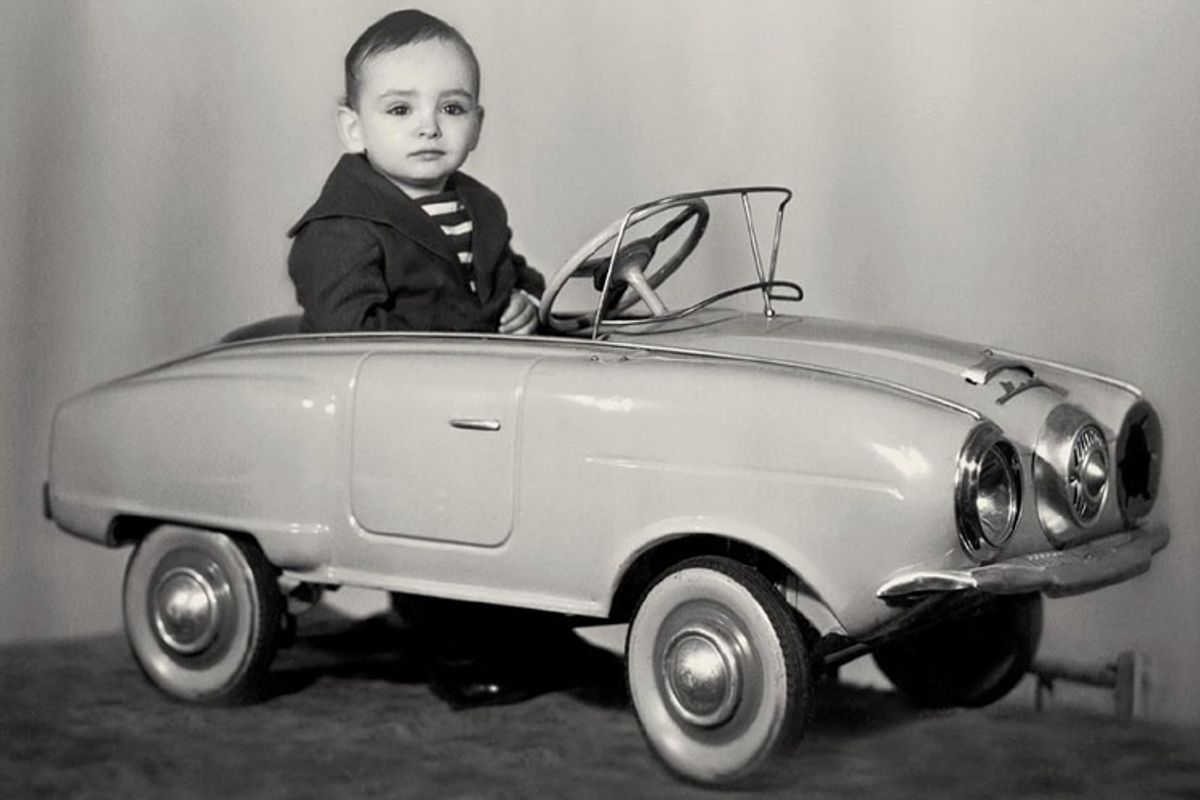 In his first two books, "The Russian Debutante's Handbook" and "Absurdistan," Gary Shteyngart brought screwball satirical zest to the genre of the immigrant novel. It's disorienting enough to be suspended between two cultures, but so much more so when you're also absorbing the revelation that the Old World you've just left behind -- in Shteyngart's case, Soviet Russia -- is a theater of lies.

Shteyngart, as he recounts in his new memoir, "Little Failure," spent the first seven years of his life in Leningrad, making up stories about the magical adventures of his hero, Lenin, whose statue loomed over a nearby square. (The first of these, written at the suggestion of his doting grandmother, involved a friendly giant goose and a plan to invade Finland.) When he and his Jewish parents were allowed to leave as part of a trade agreement with the U.S. in the 1970s ("Russia gets the grain it needs to run; America gets the Jews it needs to run: all in all, an excellent trade deal"), his father had to sit him down and explain that "we are going to the enemy," who wasn't actually the enemy at all. And then there are the not one, but two spare rolls of toilet paper in the hotel bathroom in Vienna where the departing family spend their first night outside the motherland. "Before such magnificence our collective Soviet ethics yield."

Shteyngart's novels are hilarious, but "Little Failure" reveals a writer with some ambivalence about his celebrated sense of humor. Marooned with little English at the Solomon Schechter School of Queens, where "it is understood that anyone can hit me," he eventually created a new identity, "Gary Gnu," jokester and author of the "Gnorah," a "hatchet job directed at the entirety of the SSSQ religious experience." Antics and wisecracks made Shteyngart something more than a receptacle for "the sunlit, nascent-mustachioed hatred of the future home owners of eastern Queens," but he worries about the evasions and cruelty inherent in humor. Looking back, he writes, "on so many occasions in my novels I have approached a certain truth only to turn away from it, only to point my finger and laugh at it and then scurry back to safety. In this book, I promised myself I would not point the finger. My laughter would be intermittent. There would be no safety."

As a reader (and longtime fan), I think Shteyngart's too hard on himself. Most satire, once you bite through the crunchy candy coating, contains at its center a bitter little seed of misanthropy, but that's never been the case with Shteyngart's work. However self-deprecatingly goofy his public pronouncements and promotional book trailers can be, the books themselves are engaged in the hair-raising project of seeing just how unreservedly he can mock the brutality and injustice of the world without losing hold of his humanity. He always pulls it off. When Shteyngart was in his early teens, an ardent Republican who disdained "welfare queens" and turned his bedroom into a replica of J.R.'s office in "Dallas," a perceptive teacher once handed back a writing project with the note "Your materialist exterior hides a sensitive aesthetic soul." I'll take Shteyngart's word for it that in real life he has been a jerk, but his fiction keeps betraying his inner mensch.

"Little Failure," for all Shteyngart's reservations about laughter, can also be very funny, whether he's describing his grandmother's aged Zenith television ("like a dog too old to run after the ball, it's no longer interested in catching the electromagnetic signals that transmit picture and sound"), or the shock of his first contact with non-Russian officialdom in the East Berlin airport: "The men seem to be powered by some extraordinary force, a grim ability to walk forth in a straight line and to meaningfully declare things in their strange tongue. The difference, I am too young to understand, is that the men here are not completely, debilitatingly drunk." This time, though, the "certain truth" Shteyngart intends to confront is his relationship to his parents, particularly his father, from whom he inherits his sardonic, Russian Jewish wit. It's a bond both suffocatingly close and haunted by coldness and violence.

"Little Failure" recounts Shteyngart's Soviet childhood, during which he suffered from debilitating asthma (his father nicknamed him "Snotty") and was terrified by, among other things, the ceiling fan and a steam pipe bolted to the outside of their apartment building. ("Why was I scared of everything?" he asked his mother decades later. "Because you were born a Jewish person," was her reply.) Then, in America, there is the bleak stint as a "subhuman" at SSSQ, an eye-opening experience at Stuyvesant High School in Manhattan (where his nickname was "Scary Gary" and his friends bought the paper cups used by Greek diners in bulk to disguise their midday Kahlua cocktails as coffee) and finally four years, mostly stoned, at Oberlin College, where he found his first girlfriend at last.

This isn't really a memoir about how Shteyngart became a writer, a largely unfraught process because, as the author explains, he literally can't do anything else: "no fried egg, no coffee, no paralegaling, no driving, no balanced checkbook, no soldering a fatherboard onto a motherboard." There is a brief, pointed passage about one semester at Oberlin when he succumbed to the directives of a guest writing teacher who had been indoctrinated by the famous guru-editor of literary minimalism, Gordon Lish. For the term, Shteyngart wrote in "the terse, indecipherable, bullshit-mysterious style that Gordon Lish, somewhere in Manhattan, is clearly asking of me." But it didn't stick, obviously, and the experience left Shteyngart with the conviction that "people who think literature should be Serious -- should serve as the blueprint for a rocket that will never take off -- are malevolent at best, anti-Semitic at worst."

After college, Shteyngart returned to New York, got a job and another girlfriend and wrote emails with lines like "We had tapas at Xunta that were nonpareil" -- which Shteyngart seems more than happy to quote, brave man. He finds and alienates a mentor, rewrites his first book six times and finally sells it. But as important as the launch of his career is a reconciliation with his mentor, on the condition that Shteyngart undertake psychotherapy. He does it the old-fashioned way, with a totality that seems very Russian, and commences psychoanalysis, four days a week. "It saves my life," Shteyngart writes. "What more can I add to that?"

What it did was show him how to go on loving and cherishing his parents while at the same time acknowledging and trying to repair the damage they'd done; in other words, it showed him how to grow up. In "Little Failure," the author is retelling his own history, revising the version of it he's kept within himself, half-examined, and reaching to empathize with the people who have injured him and the people he has injured in turn. In that, this memoir is not so very different from the acrobatic reconciliations of Shteyngart's fiction, the way it strives to maintain its tender core however black and reckless the surrounding comedy.