Comprehensive reform appears likely to die in Congress. One thriving immigrant community proves why it shouldn't 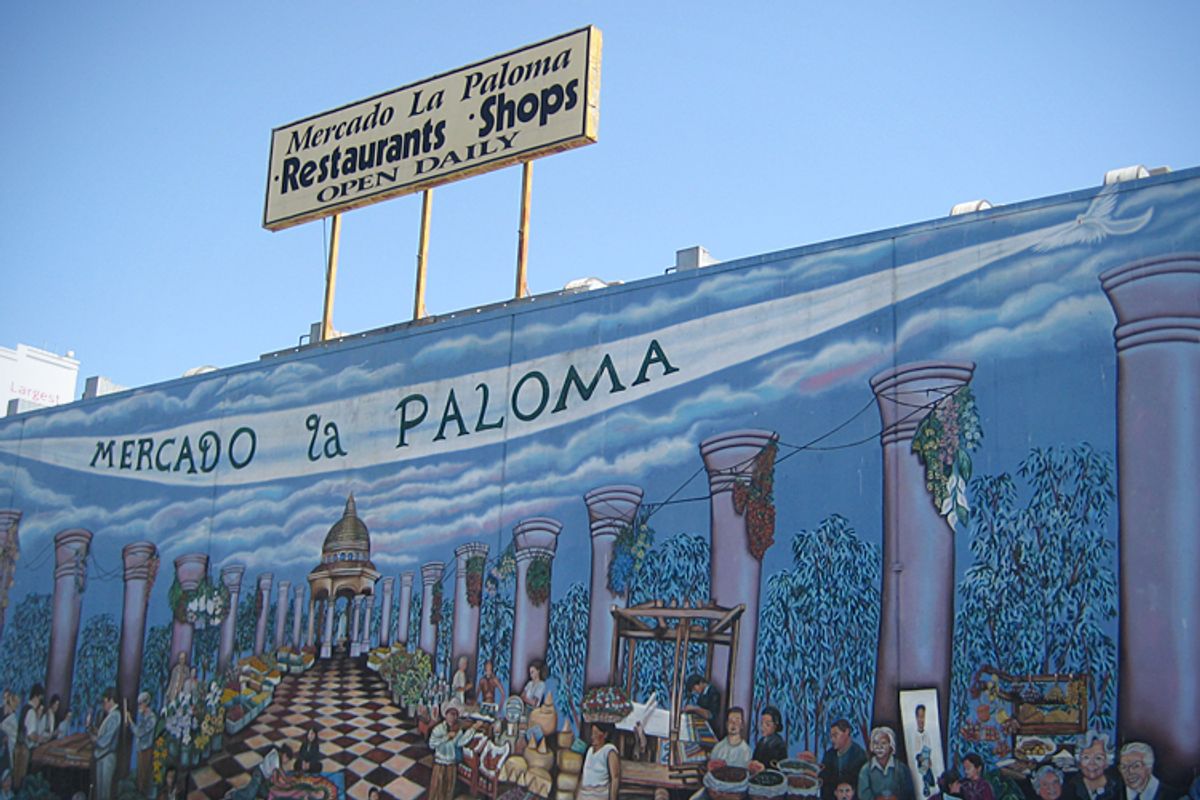 On a rainy day in South Central Los Angeles, a cold breeze rushes into a building on Grand Avenue and twirls the fiesta lanterns dangling from the rafters. Below, an almond-eyed woman dressed in lace lights candles on a makeshift altar for Our Lady of Guadalupe. A few feet away, a man wearing a colorful serape arranges a nativity scene. Suddenly, braceros burst through the rain-streaked door, carrying armfuls of gladiolas and poinsettias, delighting the children.

'Tis the season of Las Posadas — the nine-day Mexican celebration of Christmas that began running from the middle of December through Christmas. The bustle inside Mercado La Paloma is especially joyous since the immigrant retail center is about to pay off its entire $8 million debt — loans it probably wouldn’t have been able to secure in today’s corporate banking era.

The story of La Paloma is one reason why the House of Representatives should join the Senate and White House in passing comprehensive immigration reform in 2014. Polls show that the American public supports immigration reform that includes a path to citizenship — and no wonder. Many of our friends and neighbors run tiendas, officios, and home- or truck-based businesses, legal and illegal. But few of us know that these activities contributed about $500 billion to our economy in 2012, according to the United States Hispanic Chamber of Commerce. And that doesn’t count the money generated by the 11 million non-citizens or “illegal” immigrants working here. Plus, there is the hard-to-quantify value of how these ventures improve our street corners by contributing not just jobs and taxes to the common wealth, but voice, creativity and pleasure.

This retail center is two miles south of Los Angeles’ financial heart, but it might as well be light years away from the marble arteries of Bank of America Plaza and L.A.’s World Trade Center. Bordered by two major freeways on the north and east and by Martin Luther King Boulevard on the south, the area was once a vast wasteland of illegal garment factories, slum housing and off-the-book transactions (including drug deals). Some of the grime and grit remain. But over the past 13 years or so, the neighborhood has been improved significantly by the pioneers at Mercado La Paloma.

Meet Raul Morales and his wife, Guadalupe. The couple arrived here from Michoacán in the early 1990s. They supported themselves by selling carne asada out of the trunk of their car. They met another street vendor, Gilberto Cetina, who hailed from the Yucatán Peninsula. He and his wife Blanca specialized in polla pibil, a dish made on a kerosene stove they unpacked from their van. The couples began working together — one selling steak, the other chicken — feeding the workers who emerged from the factories and yards. In between shifts, they shared dreams of earning enough money to someday run their own cafés — with a kitchen and a stove — and to send their kids to college.

At the time, those dreams seemed too fantastico. Many immigrants were living in vermin-infested tenements east of the Harbor Freeway, a 10-lane speedway of asphalt and exhaust. West of the freeway sprawled places of unimaginable wealth and power: the University of Southern California, with its $3.7 billion endowment; Mount St. Mary’s College and the Doheny Mansion; the Los Angeles Convention Center, with its beauty pageants and reality TV auditions. When the $400 million Staples Center opened in 1999, thanks partly to $72 million in public funds, other developers rushed in with plans of luxury hotels and condos. All that money started to squeeze the working-class families who lived in this densely packed corridor. And unlike their more glamorous neighbors to the west, the immigrant workers had little clout and few rights.

But they had a tireless advocate in the guise of Sister Diane Donoghue. A member of the Sisters of Social Services, the nun worked at nearby St. Vincent Catholic Church. When a parishioner who was dying of cancer called to say her landlord was evicting her from the home she and her family had occupied for decades, Donoghue took action. She knew that many other families would soon be homeless if yet another high-priced operation was allowed to displace the low-wage workers. So, she founded the nonprofit Esperanza Community Housing Corp. — esperanza means “hope” in Spanish — and partnered with community developers and a few then-regional banks.

She and her team raised the funds to buy two slum houses. They replaced squalid units with about 40 clean affordable ones and a community center that housed a Head Start program. “Most of the residents were undocumented and that was okay,” said the nun. “It’s never been a question.” Some were here legally and Gilberto, for one, moved his family into an Esperanza apartment. But he never let go of his and Raul’s dream of owning a business. One night, they hit on a plan: Why don’t we recreate the bustling markets like those we left behind at home?

That’s what “immigrants” had been doing in Los Angeles for centuries. Six years before British colonists on the East Coast declared independence from England, a group of Mexican families arrived here on horseback and staked a claim for the viceroyalty of New Spain. Later, in 1779, King Carlos III of Spain was so pleased he ordered that a church be built along the banks of the Los Angeles River. La Iglesia de Nuestra Senora la Reina de Los Angeles — The Church of Our Lady, Queen of the Angels — remains the oldest building in Los Angeles still used for its original purpose. It’s a constant in the ever-changing skyline here, the only dependable place offering sanctuary to all comers, the same migrants who’ve helped turn “Alta” California into the richest state in the nation.

Yet, they’ve often been quashed by more powerful interests. In the mid-1990s, for example, Esperanza was sheltering a few hundred members of the working poor. But Donoghue quickly realized that shelter solved only part of this urban problem. “We needed to create opportunities for them to obtain living-wage jobs, too,” she said.

So the nun tapped her connections, both temporal and divine. She and her flock found an abandoned sweatshop on Grand Avenue with three stories and an ugly past. The ground floor still was packed with industrial sewing machines at which workers had toiled for 11 to 16 hours a day with few breaks and no overtime. But the second floor had housed the executive offices, with spacious suites, a commercial kitchen and a sauna. The Beverly Hills owners had abandoned their illegal garment factory, so Donoghue set about buying it. She strong-armed her uptown friends — bankers, councilmen and philanthropists — and cobbled together grants, low-income tax credits, bank loans and redevelopment money. At some point, she and her crew came up with an untraditional plan for the 34,000-square-foot site:

Raul, Gilberto and the others signed on. “We were selling food outside of the building and saving our money to make improvements,” Raul recalled. In between cooking meals, los vendedores also hauled trash out of the building, scrubbed floors and painted walls canary yellow and terra cotta. A Korean contractor was hired to rip out some walls. Trees were planted; a parking lot was paved; glass sliders brightened the once grim doorway. When Raul and Gilberto finally set up their own kitchen, their wives began to cry. “We’d been working together for this our whole lives,” Raul explained. In early 2001, Mercado La Paloma finally opened its doors — just as the dot.com bubble burst.

“The first two years were rough,” said Gilberto. About half of all small businesses fail within the first three years, but immigrant firms face additional obstacles of language, culture and prejudice. Seven months after it opened, La Paloma needed more money. Donoghue arranged to fly to New York and make a case to officials at Dai-Ichi Kangyo Bank in the World Trade Center. But days before her September presentation, six of La Paloma’s eight vendors walked out. “I had a crisis on my hands and called the bankers to tell them we couldn’t come,” she recalled. On the day of Donoghue’s scheduled meeting — September 11, 2001 — the bank’s New York offices were destroyed by one of the hijacked planes.

That event plunged the country into a deeper recession. Yet in South Central L.A., neighbors rallied around the Mercado, buying fresh meals from Raul’s Taqueria Vista Hermosa and Gilberto’s Chichen Itza Restaurant, and lingering at the beautifully tiled tables in the center. Slowly, other first-time entrepreneurs stepped in to lease space: a couple from Oaxaca opened up Artesanias Oaxaquenas, featuring exquisite papel picados and folk art. A talented tailor from Honduras started Gloria’s Alterations. Joe’s Sports World specialized in USC Trojan jerseys, Laker shirts and Dodger caps; and Quest Insurance  hung up its shingle, selling home and auto policies and tax preparation services. At one point, this experiment in community revitalization included a Peruvian chef, a Thai restaurant, an Ethiopian café and an urban farmers’ diner.

Clearly, reform that offers a smooth pathway to earned citizenship is good for everyone. But prospects for passing comprehensive reform appear dim. A bill passed by the Democratic-controlled Senate and backed by the White House includes money for border security as well as a 13-year path to citizenship for the 11 million non-citizen immigrants. Yet, despite their pro-business stance, most House Republicans have rejected the comprehensive approach. The House Judiciary Committee has moved forward with single-issue immigration bills that could come to the floor early next year. But piecemeal “reform” will be inefficient, confusing and time-consuming. It’s doubtful whether we’ll ever get any meaningful legislation on the issue.

What is clear is that leaders in Los Angeles, San Antonio and even Roxbury, Mass., have seen the power of immigrant-owned businesses and support it. When an outlet mall in downtown Woodburn, Ore., dried up after the crash of 2008, Mexican-immigrant entrepreneurs moved into the vacant storefronts and helped revive the town’s core. Phoenix is a hotbed of Latino-owned firms, with 67,000 of them ringing up sales. These Hispanic owners and their Anglo customers will be watching Congress closely to see if it’s going to boost — or shackle — this growing trend.

Meanwhile, back at La Paloma, the children prepared to reenact the Holy Family’s search for shelter. The celebration was marked with music, candles and the display of miniature shepherds and clay kings. On my rainy-day visit, I saw toddlers playing on giants blocks as their parents talked. I heard the sounds of canciónes de navidad, felt the light of the flickering candles and rubbed shoulders with members of the broader Los Angeles community: Two Eagle Rock hipsters bought gifts of jewelry; a fashionable Brentwood lady loaded up on party favors for her holiday dinner; raucous students from USC ate food that that Gilberto’s adult son, now the chef, had cooked and that Raul’s daughter, now a college student, piled upon two tables.

It seemed as if all of La Paloma’s 110 employees were working, including the native-born members of the second immigrant generation. Ever since this place opened 13 years ago, it’s raised the living standards of not just the shop owners and their families, but of the entire community. Across the street sits a new green field for public school children. Private offices are opening a few blocks away, and up the street sit yoga studios and artists’ lofts. Farther north is the 97-year-old Grand Central Market, where generations of immigrants who’ve sold pizza, burritos and sticky rice are about to have their own market makeover. “We’ve been a big force in this area’s revitalization,” said Donoghue. Wouldn’t it be great if federal lawmakers could lend a hand, too?