Lesley Stahl tries to argue that cleantech is dead. Not only is she wrong, she entirely misses the point 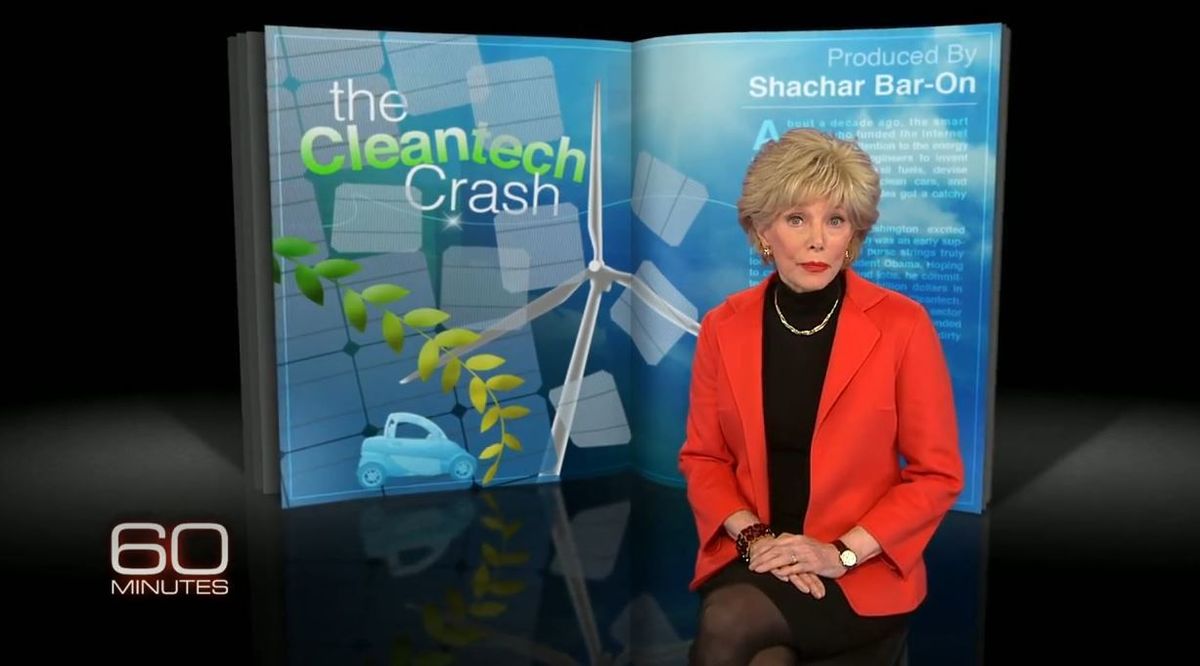 Last night's "60 Minutes" segment on the so-called "Cleantech crash" paints a grim portrait of the federal government and Silicon Valley's investment in green technology. But its muddled, highly selective narrative is striking many in the know as misleading and, in places, downright wrong.

Host Lesley Stahl begins by building up the promise of clean energy: "About a decade ago," she says, "the smart people who funded the Internet turned their attention to the energy sector, rallying tech engineers to invent ways to get us off fossil fuels, devise powerful solar panels, clean cars, and futuristic batteries." But instead of delivering on those lofty promises, she concludes, "the sector suffered a string of expensive tax-funded flops." Cleantech, per Stahl, is dead.

Even before the segment aired, there was trepidation that it was going to get a lot wrong. CleanTechnica, which, if you couldn't guess from the name, blogs exclusively on this one topic, got ahead of Stahl's report with 13 charts showing that cleantech is alive and well -- and even thriving. As it aired, and well after, Twitter served as a rolling fact check, with conspiracy theorists noting that ExxonMobile has been paying to promote "60 Minutes'" tweets.

The cleantech crash, according to some, is imaginary. Climate Progress' Joe Romm wonders how "60 Minutes" managed to find a cleantech entrepreneur in China, the world leader in both solar and wind power, to announce that “cleantech is not going well" with a straight face. In another chart-heavy post, Romm pulls from a recent Department of Energy report to show that "the only thing in cleantech that is crashing is the cost of key components," allowing for record explosions in wind, solar, LED lights and electric vehicles. The key data from the report is worth restating:

Allowing the show credit for getting some things right, Gigaom's Katie Fehrenbacher identifies what's most misleading about it: while a "crash" (quotation marks hers) did occur in Silicon Valley, she writes, the government's support of clean power and energy efficiency (which, the DOE report shows, wasn't nearly as big of a failure as Stohl suggested) has little to do with the Silicon Valley bubble. As Fehrenbacher puts it, "They’re totally separate and different."

The bigger question, though, goes back to the show's motives. Who was "60 Minutes" serving at the expense of tearing down cleantech?

(Worth noting: as I typed out that very question, I received this statement in my inbox from the American Coalition for Clean Coal Electricity responding to the segment:

We support a commonsense, all-of-the-above approach to energy security in our nation, and there is a role for more renewable energy...Unfortunately, the taxpayer money that has been squandered on these pie-in-the-sky projects could have brought about real advances and price support for the slate of more than 15 demonstrated technologies the coal industry is already using in power plants across the country.)

Another thing glaringly missing from the report, as identified by the Mercury News' SiliconBeat: it didn't once mention climate change. It doesn't mention pollution or carbon footprints, either. Stahl basically accuses the federal government of wasting the $90 billion it poured into green technology, claiming that "there were not that many jobs created." She's wrong, but that's beside the point. Job creation may have been the point of the stimulus investments, but it was never the point of cleantech: Steve Koonin, former head scientist for the Energy Department, tells Stahl as much when she challenges him on that point.

All those things that go unsaid are cleantech's true endgame. And in this one, crucial way, "60 Minutes" entirely missed the point.  That same Chinese investor agrees with Stahl that he didn't think American taxpayers have gotten their money's worth, but adds that this is only by today's standard. "If you view this as a step stone to the future," he goes on, "when you get there, when you look back, I would say yes."