"House of Lies": Getting the band back together

After last season's breakup, the fun of this season will be watching how the principals come together again 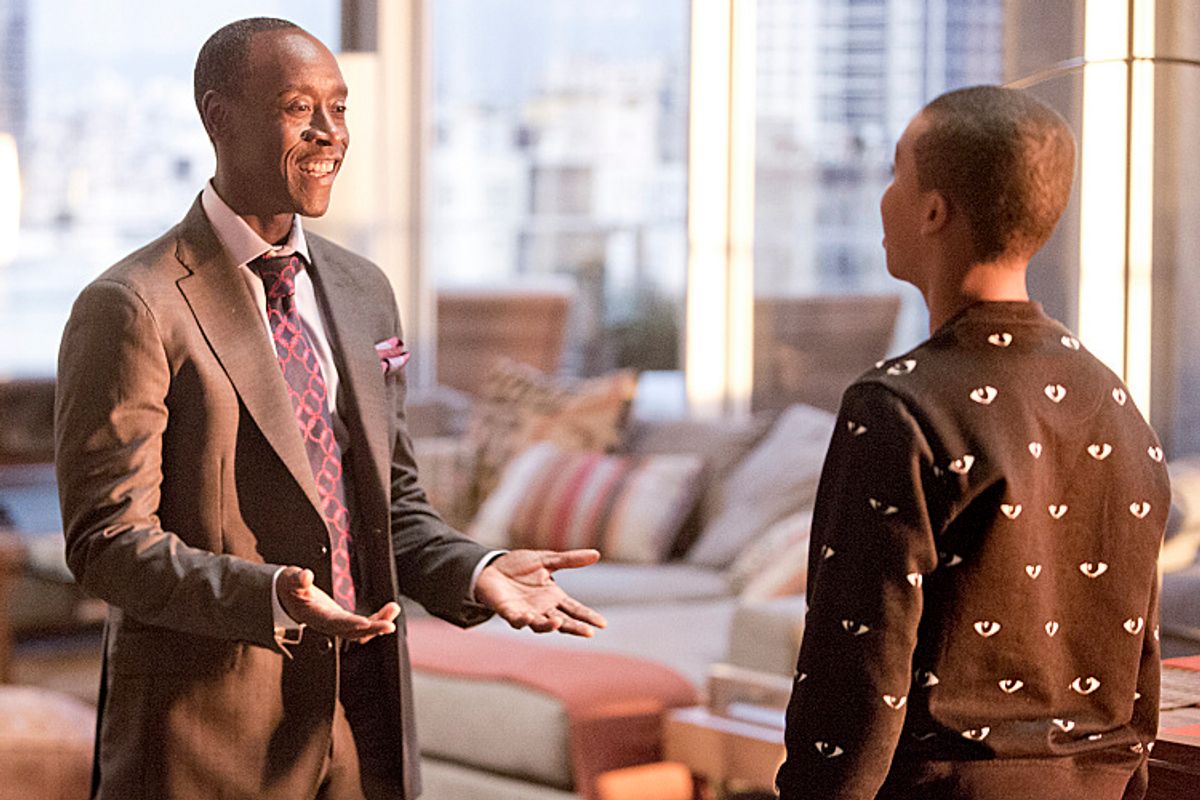 There's a scene late in this Sunday's season premiere of Showtime's "House of Lies" where creepy management consultant Clyde Oberhaltz (Ben Schwartz) tries to disabuse a terrified co-worker of the notion that he is a violent sex offender. "Rape accusations are like quicksand," another colleague casually chimes in, "the more you fight, the worse it gets." Believe it or not Schwartz's character on "Lies" is typically only a shade less smarmy than Jean-Ralphio, the unapologetic douchebag caricature he portrays on NBC's "Parks and Recreation." So, to be rightfully defending his honor is actually a step up -- and one mined for substantial, albeit uncomfortable humor.

"House of Lies" is, of course, about co-workers -- money-driven, morally compromised co-workers whose backbiting, indelicate ribbing and wholly unprofessional interoffice dynamics have surely become overly familiar to fans of the show by Season 2. I mean, how many times can somebody tell dumb Doug to "shut the fuck up" or try to sleep with his girlfriend before even that lapdog doesn't think it's funny anymore? Rather than drown in utter predictability, however, the show runners at "Lies" employed a tried and true gambit at the end of last season guaranteed to imbue the salacious, somewhat flawed series with at least a dozen more installments worth of new life: They broke up the band.

You know the tactic. You've seen it a half-dozen times in the last 10 years, at least. This is where, after a couple of seasons or so, some character at the core of a television show will decide to "move on," likely starting "their own firm," dismantling significant, established relationships and forcing new potentially dramatic and unfamiliar ones to form. "The Office" famously did it in Season 3 by transferring Jim to the Stamford branch, where he got all cozy and chummy with Karen Filippelli (Rashida Jones) and Andy Bernard (Ed Helms), respectively. That split not only sparked romantic conflict -- Team Pam vs. Team Karen -- but also brought in some new blood.

Ari Gold (Jeremy Piven) opened his own shop on "Entourage" and strained his already wildly superficial relationship with his pretty boy meal ticket, Vinnie Chase (Adrian Grenier). On "Mad Men," Don Draper (Jon Hamm) fractured the firm and almost lost his protégé Peggy Olson (Elisabeth Moss). Recently, "The Good Wife" broke up the band to spectacular effect when Alicia Florrick (Julianna Margulies) and Cary Agos (Matt Czuchry) splintered from Lockhart Gardner, creating a ferocious, spiteful, jealousy-fueled war with their former bosses and making this one of the show's best seasons ever. (Proving that the TV trope is not exclusive to imaginary firms and private businesses, "The Wire" broke up the band nearly every season, scattering both its cops and its robbers to the gritty corners of Baltimore nearly every 12 episodes.)

So wherein lies the storytelling genius of breaking up the band? Isn't it obvious? Eventually -- usually -- the show's creators must get everyone back together. That takes time and creates plenty of opportunities for dramatic plot twists. "House of Lies," a show known for its over-the-top inflection points, is just warming up. At the Ross-Rachel level, this season begins with Kaan and Associates' head Marty Kaan (Don Cheadle) scheming to reel his slighted right hand gal (and stalled love interest) Jeannie van der Hooven (Kristen Bell) into his new fold. As of yet, it's not the most compelling wooing on the small screen. On the other hand, watching Clyde Oberhaltz do absurd penance at the hellish firm of Kaan's ex-wife while trying to figure out how to worm his way back into the good graces of the lesser of those evils provides some of the funniest interactions the show has given us since its debut. Have faith; the band will get back together. Hopefully, they will take their time.

(Season 3 of "House of Lies" premieres on Sunday.)