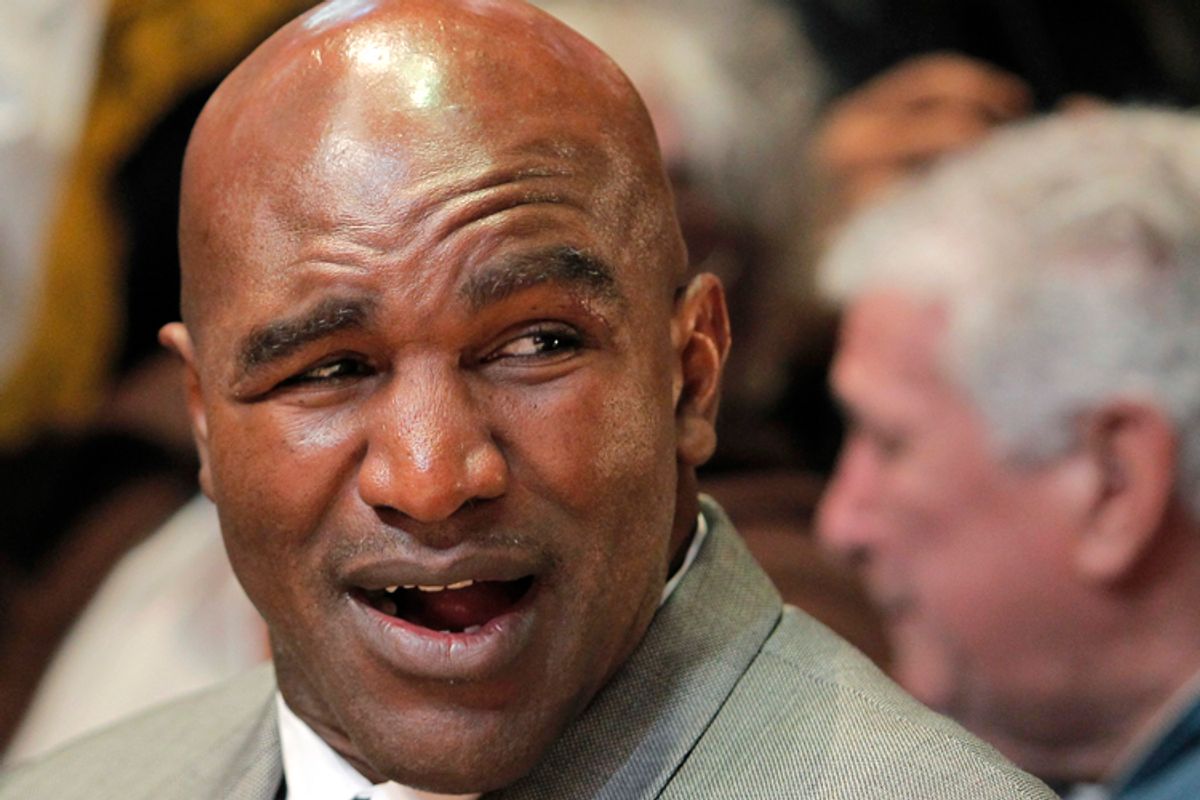 Because apparently this still needs to be said in 2014: Stop telling gay people to just stop being gay. This means you, Evander Holyfield.

The former heavyweight champion has of late been appearing on the U.K. version of "Big Brother," where this weekend he garnered several viewer complaints -- and received a reprimand from the show's producers – for his deeply ignorant comments on how he believes homosexuality works. In a conversation about gay sports stars during Sunday's episode, fellow contestant Luisa Zissman told Holyfield, "I think it's good to be open like that because it's normal." "But that ain't normal," he replied. And when she countered, "That's just the way some people are born," he stuck to his guns, saying, "It don't make no difference. If you're born and your leg was turned this way, what do you do? You go to a doctor and get it fixed back right." Later, members of the show's production team told him, "While Big Brother understands these are the views you hold, they aren't the views that are held by a large section of society, and expressing these views will be extremely offensive to many people."

The public finger-wagging from the show may have been a response to last summer's American "Big Brother" and its cast's largely unfiltered festival of racist, sexist and homophobic dopiness --  a display of casual hatred that understandably offended plenty of viewers. And on the other side of the pond, last season's U.K. "Big Brother" was "most complained-about show of 2013." Holyfield, who has not apologized for his remarks, explained to producers, "I was just telling her my opinion but it's not like I was going to mention [it] to anybody else. It was just our conversation."

Holyfield's notions about gay people are reminiscent of "Duck Dynasty" star Phil Robertson's notorious recent remarks in a GQ interview, in which he tried to argue against male homosexuality by noting, "It seems like, to me, a vagina—as a man—would be more desirable than a man’s anus. That’s just me. I’m just thinking: There’s more there! She’s got more to offer. I mean, come on, dudes! You know what I’m saying? But hey, sin: It’s not logical, my man. It’s just not logical." Amazingly, after the interview appeared, every homosexual dude in America was not automatically sold on vagina.

It's appalling that gay men and women are still pressured to try to be something they're not. In China, an estimated 16 million people are in "sham" marriages involving a straight person with a gay partner. As a divorced woman told Global Times just this week, "I thought I could 'fix' myself by acting straight and getting married." And though people like Evander Holyfield have a right to their opinions – even if they're dumb, incorrect ones -- there's enough ongoing ignorance out there to make it necessary for those of us with the ability to say, "Hang on a sec, pal," to do just that.

Fortunately, there are encouraging signs that this damaging nonsense is being challenged. Last week, the publisher of the advice book "Maybe He’s Not Gay: Another View on Homosexuality" pulled the book from Amazon after a backlash of "rotten reviews" on the site. And last year, both California and New Jersey moved to outlaw the despicable practice of gay conversion therapy.

Science still hasn't fully unlocked the riddles around sexual orientation. In 2012, Cynthia Nixon created controversy by saying she was gay by "choice," as if her acknowledgment of her own experience was an invitation for equality opponents to say "Aha! So you CAN flip it on and off!" But however orientation happens, gay people don't need a doctor, Evander Holyfield. They don't need the merits of vagina over anus explained to them, Phil Robertson. Homosexuality is never anything to be wished or hoped or prayed away. Whom we love is so much more than a matter of what parts of the anatomy we prefer. As Maria Bello's son says in her righteous December "Modern Love" piece, "Love is love, whatever you are." And however anyone defines him- or herself, it's not up to anyone else to try to fix them, cure them, convert them or talk them out of it.