The wrong kind of queer

Growing up, I was ashamed to be a lesbian. Now the country is changing. Can I ever catch up? 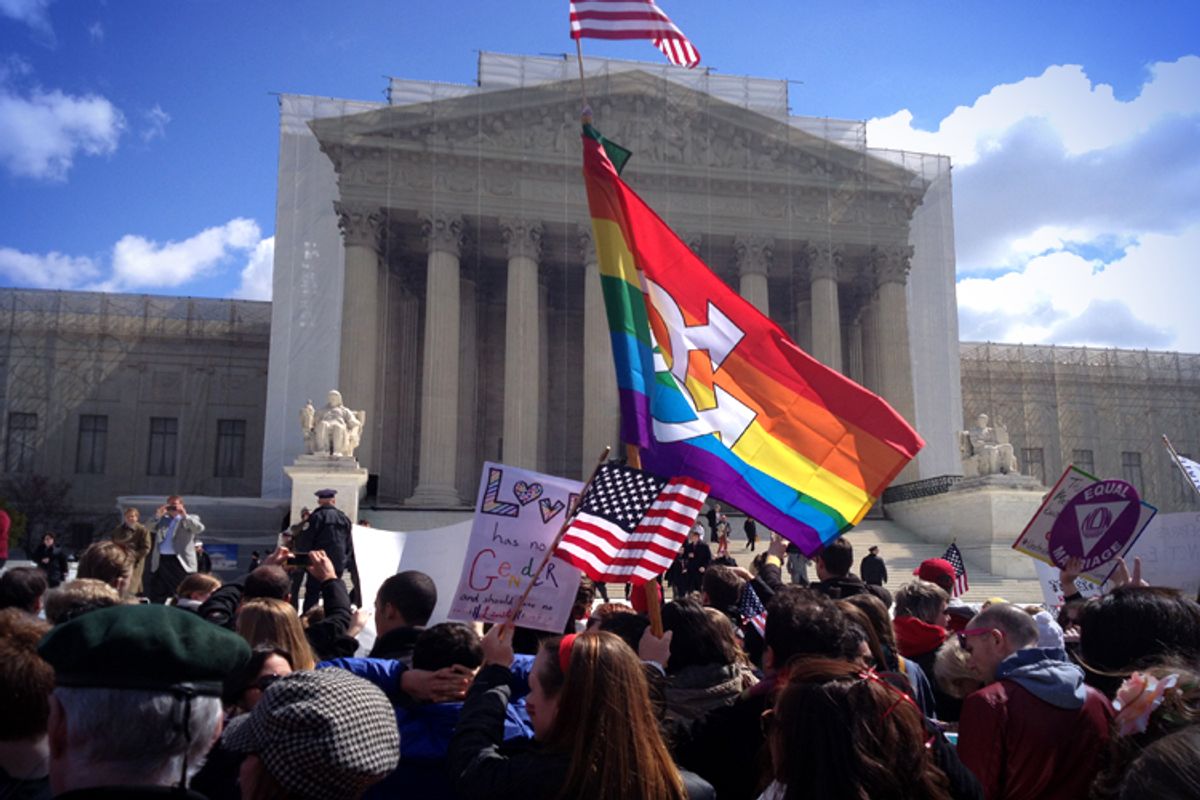 At 36 years of age I suspect I am part of the last generation raised to hate ourselves for this particular aspect of being, for this part of ourselves we had no part in making. The last raised to know, before we even knew what we were, that what we were was unspeakable. The last raised not knowing equality was an option — and therefore not to miss it. To miss something is to know it might exist, and thus to have a kind of hope. The last, instead, only to be harmed by absence. By the absence of this thing we could not quite name. Love.

I was still standing in the marble corridors of the Supreme Court last March, having just left the historic Defense of Marriage Act arguments, when I started to cry. I didn’t even have my coat yet. I walked to the locker, crying. My friend was already inside the locker room and for her, but also for myself — to understand — I tried to find words for why I was crying. I said, “I didn’t think this would happen in my lifetime.” This, meaning this day, meaning these questions the court was ruling on, meaning federal recognition of marriage. Meaning marriage.

Marriage meant a man and a woman, so marriage would not be mine. And there was no other word for it. What word would I think? What name? In other ways who I was was defined by names. The name of my childhood crush. The name of the female teacher whose breasts I hated myself for staring at because I wasn’t a boy and I knew that boys were the ones who looked. I wanted to be a boy, if it meant I got to look. The name of my friend in college, whose smile I stayed up nights thinking about. When it was my chance to direct a play in our workshop group I requested permission to do a lesbian alternative casting and put her in the lead. So avant-garde.

Really I just wanted to see if she would kiss a girl. She did, but onstage only. Never me.

The name of the first girl who kissed me, on steps not unlike the court’s, while I, frozen, felt my heart rip free my chest. And the name of my first lover, whom I'll call Emily.

My first female lover, I should say. Because I dated men. I had been lovers with them and even loved them. I loved the solidity of their arms and their shoulders and how warm and strong they felt when I held them and they slid their heavy arms over me and pulled me tight. When I started dating women after years of dating men, it was the embraces that were the hardest to get used to. Everything else was like being alive. But being held unsettled me. Why these two disruptive mounds, breasts, in what had always been the plank of an embrace? The first night I returned to my bed after being in Emily's bed, I woke up crying in the middle of the night. Maybe that sounds impossible, but that is how I recall it. More likely grief woke me, and then I began to cry. For years I had loved men and lain with them and slept being held by them. One who loved me would stand behind me with his arms around me, and place his palms flat on my belly, low, where the womb is. He’d rest his head on mine and because I loved him and because I knew him I knew that he was thinking that someday, there, I would hold the product of we two, the combination. We joined together would be, in a being. For him that thought pulsed with warmth. And while I find the idea beautiful — I have always found the idea beautiful — it was also an abstraction. The difference between a star and the hard mass of a rock.

I thought I was broken. For other reasons, family reasons, I was used to love feeling complicated and sometimes cold and jagged, and I had learned to live with that split. Of course whomever I loved was who I would have to protect my heart against. So I thought I was broken, and I stayed in the man’s arms, and I thought: This is how it will be, is all. There is, I know, another kind of queer — another kind of person — who does not care about societal approval, who has been strong enough to do it (to do life) all fuck the world and fuck society and even fuck family, she’s going to follow her heart. I have met so many of these people, the beautiful and strong rainbow-wearers.

But they were never my tribe.

I need the world to be safe for the quiet, hurting ones, for the ones who already have battles to fight and don’t want another, but who need love to be the place of refuge.

It is for the quiet ones that I think this fight matters. And who knows where their energy will someday get to go because it won’t have to go here? I began writing this short essay last June, and then put it aside, because it was too painful to come to this part and write: I do not know how the court will decide. (If you did not have the experience of waiting to hear how nine people would decide on the question of whether you’d be allowed to someday get married, let me tell you: It was a very odd feeling.) But now they have ruled. Beautifully. And quietly, states have been passing marriage like a chain of dominoes falling. The IRS announced changes to clarify tax status for gay Americans. Before Christmas, a federal judge in Utah ruled marriages must begin. Utah, members of whose Mormon population were heavily involved in passing Proposition 8 in California in 2008. Utah, where gay couples can now marry. A whole lot of people are a whole lot more equal than they were when I started writing.

Now should be the easy part, the celebration, the happy denouement into a new world.

And it is. But I find sometimes, too, that I am strangely sad. Not at the outcome — no. At something else. At how unexpectedly hard it is to wrap my head around this outcome, and to wrap my heart. I feel slow. Forgive me. I learned love wrong: as a should. As a role to play, a set of obfuscations to perform. I learned to keep for myself a quiet hard heart, and try to make it blank, extinguish the flicker.

This is hard. I have always been a very good and dutiful student.

Change is here. More change is coming. For years I wanted to say to the country, hurry up. Now I look at the images and I say to myself, hurry up.

All photographs taken at the United States Supreme Court, March 27, 2013.

Alexandria Marzano-Lesnevich is a Boston-based writer who teaches at Harvard and Grub Street. Her website is www.alexandria-marzano-lesnevich.com